Congratulations to "Trish L.", the winner in Scarlett's giveaway. Thank you to all who participated!

UNDER FIRE by Scarlett Cole 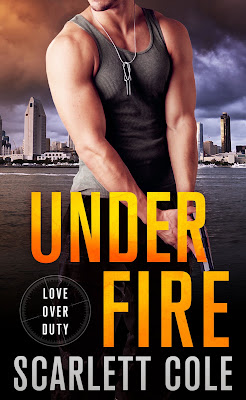 HE CAN TAKE THE HEAT.

Hot, hard-bodied Sixten Rapp is a former SEAL who’s raring to begin his brand-new civilian life. He and his Navy “brothers” start a security firm that offers the kind of services only a team of military-trained professionals can provide. But nothing prepared Six for his new client: an innocent woman on a mission to improve thousands of lives. . . unless someone takes hers first.

CAN SHE HANDLE THE FLAMES?

Dr. Louisa North knows time is against her as she tries to create a “miracle” medical treatment for a disease with no known cure, until she creates a sample so powerful that the wrong people want to use it as a chemical weapon. At first, Six is unwilling to accept Louisa as his client. But soon he realizes that the danger is real and that there’s much more to this plain-Jane scientist…including a burning passion between them that neither of them can resist. And now that an enemy is on Louisa’s trail, Six will do whatever it takes to protect her―or die trying.

The confusing thing about stress response was you couldn’t always be one hundred percent certain what had caused it. Certainly if someone pushed you off the top of a tall building, it was a reasonable assessment that it was being caused by the fact you were hurtling to your death at chronically fast speeds. But having a borderline pathological response to shyness while walking alongside a now shirtless and sweaty Six, with abs, and tattoos, and . . . Urgh, who the hell knew why the adrenaline was flowing? All she knew was that it was telling her flight, even though she was intellectually willing herself not to listen.
Louisa forced herself to slow down. To enjoy the experience. To take in the nature around her rather than how low Six’s shorts hung on his hips. She noticed a large scar on his stomach that had long since healed. “What branch of military were you?” she asked, hoping he’d believe her breathlessness was a function of exertion, not . . . Well, whatever it was.
“Navy, ma’am,” he said. “A proud member of the SEAL brotherhood.” 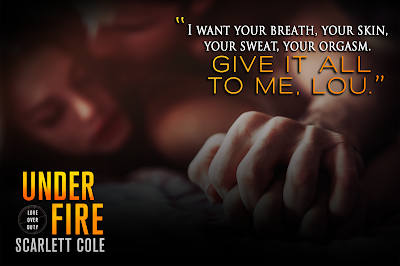 Holy shit. There was no military in her family. Spending Friday evenings at home watching movies like American Sniper and Lone Survivor constituted her only brushes with it, but even she knew that SEALs took on the toughest jobs in the toughest places. “That’s pretty badass,” she said, lamely. It wasn’t like she was known for her witty repartee on the best of days, but around Six, even her most basic conversationalist skills withered like the shrubbery that lined the canyon path. “Wait. This is the part where I am supposed to thank you for your service, right?”
Six laughed. “You’re funny, Louisa, and no, you don’t have to thank me. It was my pleasure.”
Shit. She’d spent the last five years in particular avoiding small talk for this very reason. “Well, I do thank you. Seriously, I do.”
His hand slipped around her wrist and he pulled her to a stop. She turned to look at him . . . up at him. Christ, the man was tall.
“You’re welcome,” he said.

Praise for UNDER FIRE…

“Cole has done a wonderful job of giving her characters depth and unique personality traits. She has a way of drawing a reader into a story with interesting descriptions, and the sizzling-hot romance is a huge draw. This series looks to be a good one that readers will anxiously want to get their hands on.” —RT Book Reviews

About Scarlett Cole
The tattoo across my right hip says it all really. A Life Less Ordinary. Inked by the amazingly talented Luke Wessman at the Wooster Street Social Club (a.k.a. New York Ink). Why is it important? Well, it sums up my view on life. That we should all aspire to live a life that is less boring, less predictable. Be bold, and do something amazing. I’ve made some crazy choices. I’ve been a car maker, a consultant, and even a senior executive at a large retailer running strategy. Born in England, spent time in the U.S. and Japan, before ending up in Canada were I met my own, personal hero – all six and a half feet of him. Both of us are scorpios! Yeah, I know! Should have checked the astrological signs earlier, but somehow it works for us. We have two amazing kids, who I either could never part with or could easily be convinced to sell on e-bay.
I’ve wanted to be a writer for a really long time. Check through my office cupboards or my computer and you’ll find half written stories and character descriptions everywhere. Now I'm getting the chance to follow that dream.

Giveaway:
Signed copy of UNDER FIRE and a $5 Amazon gift card to one lucky person leaving a comment or email entry!

Giveaway ends 11:59pm EST Aug. 2nd. Please supply your email in the post. You may use spaces or full text for security. (ex. jsmith at gmail dot com) If you do not wish to supply your email, or have trouble posting, please email maureen@justromanticsuspense.com with a subject title of JRS GIVEAWAY to be entered in the current giveaway.