Congratulations to Joyce M. and Alex, the winners in Susanne's giveaway. Thank you to all who participated! 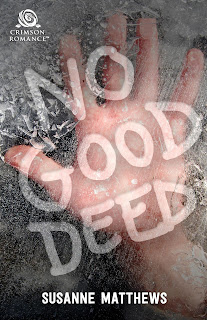 Hello and many thanks to Maureen for having me here again today. Please take a moment to comment on this post for your chance to win one of two digital copies of No Good Deed.

Many of my books are romantic suspense novels, but I’m beginning to think that with some of them, including my new release, No Good Deed, I’ve gone beyond that. I haven’t stepped into the Twilight Zone, but I have edged a different category, one I can only classify as romantic thrillers.

According to International Thriller Writers, a thriller is characterized by “the sudden rush of emotions, the excitement, sense of suspense, apprehension, and exhilaration that drive the narrative, sometimes subtly with peaks and lulls, sometimes at a constant, breakneck pace.”
This description suits many of my novels, especially my Harvester Saga which includes The White Carnation, The White Lily, and The White Iris. Here are a few comments from reviewers.

“I love a book that makes me shiver, and The White Carnation by Susanne Matthews was just that. The concept of a serial killer combined with a cult was so creepy that I couldn’t put the book down. Throw in the chemistry between Faye Lewis and Rob Halliday, and you’ve got me hooked.”

“The White Lily is book two in the Harvester Series ... Grab a glass of your favorite beverage (snacks and something to chew on, besides you nails, is suggested) settle in for a great read you won’t want to put down.”

“The White Iris takes the reader on the final journey of the cult and the people who are desperately trying to take it down. I would say the majority of this story was suspense and thriller that let me focus on the answers I have been demanding throughout this whole series. The romance between Julie and Trevor was quite literally the icing on the cake.”

I’d suspected for some time that my books had drifted away from the traditional romantic suspense formula and No Good Deed confirmed that. The cover isn’t what you would expect from a romance novel, but neither were those on my white flower books. As my publisher put it in the first sentence of the book blurb, “Psychological chills and thrills are woven around a heartwarming love story in this action-packed romantic suspense novel.”

This year, Canada celebrates 150 years as a nation, and I chose to honor that accomplishment by setting No Good Deed in an area I know well. There are even scenes in my hometown. Both main characters are broken people on the run, and it is their brokenness that pulls them together as they face an unknown enemy. I hope all of my readers will enjoy this dark romantic thriller as my hero and heroine face not only physical danger, but emotional and psychological fear and their own inadequacies. 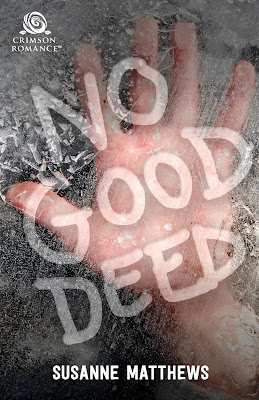 Escaping from her abusive fiancé, Alexa O’Brien pulls into a gas station only to walk in on an execution. She’s in protective custody until she can identify Nicoli Zabat, Montreal’s mob boss, at his trial. But her safe house has been compromised, setting in motion a dangerous cat-and-mouse game.

Lieutenant Mike Delorme on the Sûreté Du Québec has spent the last eighteen months undercover in narcotics to take down Zabat, the man he blames for the death of his wife and unborn child. He doesn’t have the interest or patience to babysit a woman whose memory isn’t clear—but he’ll carry out his assignment to show the brass he’s a team player.

As Mike and Alexa dodge danger, it appears she’s in deeper than merely being in the wrong place at the wrong time. When the mafia hit she witnessed is revealed to be just the tip of an international terrorist’s plot, they must rely on each other to survive—but only if they can learn to trust their instincts and let love map out their next move.

No Good Deed is available in digital format from the following retailers:

Thank you so much for the support you’ve shown me since I began my career as an author. Enjoy the rest of your summer and don’t forget to comment with your contact information for your chance to win.

Giveaway:
Susanne will be giving away a digital copy of NO GOOD DEED to two lucky readers leaving a comment or email entry.

Giveaway ends 11:59pm EST August 16th. Please supply your email in the post. You may use spaces or full text for security. (ex. jsmith at gmail dot com) If you do not wish to supply your email, or have trouble posting, please email maureen@justromanticsuspense.com with a subject title of JRS GIVEAWAY to be entered in the current giveaway.
Posted by Maureen A. Miller at 12:30:00 AM