Congratulations to "Donna W.", the winner in Christina Elle's giveaway. Thank you to all who participated!


Hi All!  I’m Christina Elle and I write quirky romantic suspense and fun romantic comedy.  I love witty banter and two characters who are always pushing each other’s buttons. 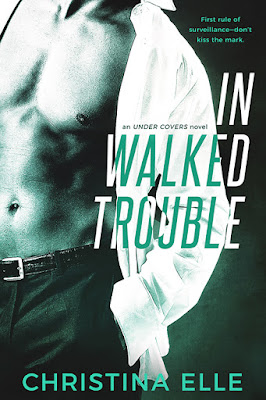 My new release, IN WALKED TROUBLE, pairs a sweet, big-hearted high school guidance counselor with a suave, sarcastic DEA Agent. There’s a bit of mistaken identity when they first meet because neither of them know that the other has information they need in order to catch the bad guy. So when they meet back up and realize there’s more to the story, fireworks start to fly! I absolutely loved watching these two go at it!

Cassandra works at a high school in Baltimore City, where one of her underprivileged students has won a scholarship for college. As long as he finishes out the year and graduates, his future is set. Except his brother is involved in the local gang and would like nothing more than for Miguel to join him instead of go to college. Cassandra makes it her mission to make sure Miguel stays out of trouble. If only she knew that the danger extends far beyond the young men in the gang.

Luke is DEA and is in Baltimore because there’s a dangerous drug lord after him. The plan is to catch the bad guy before he finds (and kills) Luke. Luke and his team are the best of the best, so it should be easy. Except a beautiful brunette keeps showing up unexpectedly while Luke is doing surveillance, confusing him in more ways than one.

For those who haven’t read book one in the series, ON HER SIX, there’s a group of old ladies who Luke lives with that are HILARIOUS! They are neighborhood watch and are feisty, feisty, feisty! I had to bring them back for this novel. J

I absolutely loved writing both stories. The characters are fun and bold. I hope you’ll find In Walked Trouble to be funny, action-packed and steamy.

Here is an excerpt:

Dipping his tongue out, he eagerly found hers. She tasted like wine, sunshine, and temptation. He couldn’t make sense of that thought, and he didn’t want to. All that mattered was his hand closing into a fist around her tousled hair, and her mouth staying exactly where it was against his. She let out a little whimper that ignited his blood to molten fire. He devoured her completely. Took every sigh and moan she put out, and returned it with as much vigor and eagerness.

Luke eased her onto the sofa and settled on top of her, cradled between her open legs. His free hand coasted down her side to her thigh. Hitching her leg up, he wrapped it around his back.

Straining against his jeans, he yearned for a way inside of her.

She clasped the back of his head, applying enough pressure to take control of the kiss. Adjusting her head slightly, she opened her mouth wider, inviting him in for an even deeper connection.

One quick slice of his hips against her heat, and she was already meeting him halfway. She gripped his shirt like she was trying to crawl inside of him. The thought would’ve made him laugh if it wasn’t for the fact that he was so damn turned on he could barely think about anything but getting her naked.
“Luke,” she moaned. “We shouldn’t…”

He kissed her again. “Yes, we should.”

“This is crazy…” she tried again. “How can I want you so bad from just a kiss?”

His lips crashed down on hers. He didn’t care what the reason was, just as long as she wanted him.

DEA agent Luke Calder needs a distraction. With a deadly target on his back, his plan is to drink away his impending demise. Except instead of getting blessedly drunk, in walks a woman who he knows has a much deeper story than she’s leading on. And he definitely wants to know more. Especially after learning she might have something to do with that bullseye on his back. He’s not cool with lying to her, but desperate times call for desperate measures. And what starts out as simple surveillance turns into so much more.

Cassandra Stone is having a bad night. Her boyfriend’s been cheating because she’s not “adventurous enough” in bed. So, she does the next logical thing—she goes in search of a dark, dangerous one-night stand. Instead, she finds smoldering eyes, deep dimples, and the killer smile of a guy who won’t leave her alone. Damn him. He says and does all the right things, making Cass believe that good men still exist. Until she learns why he took an interest in her in the first place.
Amazon  |   B&N  |  iBooks  |   Kobo  |  Google Play

About the Author:
Christina believes that laughter really is the best medicine, which is why in her stories she blends a healthy dose of hilarious hijinks with gritty suspense.

Christina lives near Baltimore with her husband and two sons, who give her an endless supply of humorous material to write about.

Find Christina online:
Website
Facebook
Twitter
Instagram
Goodreads
Giveaway:
Sign up for Christina Elle’s newsletter, which is full of all sorts of fun content about her books and life. Sign up here and then comment below that you did. A winner will be chosen at random to receive an eBook copy of ON HER SIX!
Giveaway ends 11:59pm EST Aug. 1st. Please supply your email in the post. You may use spaces or full text for security. (ex. jsmith at gmail dot com) If you do not wish to supply your email, or have trouble posting, please email maureen@justromanticsuspense.com with a subject title of JRS GIVEAWAY to be entered in the current giveaway.
Posted by Maureen A. Miller at 12:30:00 AM