All About Tag Lines

At a recent meet-up, I was surprised to learn that many of the writers in the room (myself included) didn’t know the difference between a log line and a tag line. I had always assumed the two terms could be used interchangeably. While both terms originated in the film industry, the two concepts have very different structures and functions.

A log line provides the main conflict, main character, and the stakes in a well-constructed sentence that is usually less than 25 words in length.

A tag line is a catch phrase that sets the tone. It sums up the entire plot in one compelling phrase or sentence that is at most 10 words in length.

In my research, I discovered that several synonyms exist for taglines, among them tags (United States), end lines or straplines in the United Kingdom, payoffs in Italy, baselines in Belgium, and signatures in France.

Here are sample tag lines from the film industry:

One ring to rule them all. Lord of the Rings

Don’t go into the water. Jaws

Not every gift is a blessing. The Sixth Sense

The Toys are back in town. Toy Story 2

There can be only one. Highlander

Whoever wins...We lose. Alien Vs. Predator

While these tag lines evoke interest and emotion, they provide few specifics about the individual movies. Instead, puns and clever wording set the appropriate tone and succeed in hooking potential moviegoers.

In the same way, a tag line for a novel needs to tantalize prospective readers with a minimum of well-chosen words and images. Less is definitely more when it comes to taglines.

Here’s the tag line for Too Many Women in the Room: 8 women → 8 motives to kill. 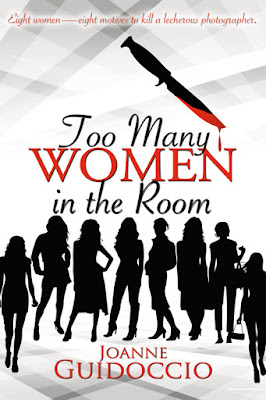 Excerpt
Carlo’s hand caressed my thigh. More sex. The man could be insatiable. And it had been almost two weeks since our last romp. We started to kiss and then his cell phone vibrated.
Carlo groaned as he leaned over and picked up the phone. He sat up, his back to me. “What’s happened?” he barked. Carlo’s shoulders tensed. A long sigh and then his terse words. “Clear the perimeter, stat.”

Clear the perimeter. My heart beat faster as I recalled the last time I had heard those dreaded words. It could mean only one thing. Another murder. Two murders in less than twenty-hours. What were the chances of that happening in Sudbury? At the Christmas party, the police chief had bragged about one of the lowest murder rates in Canada during the past twelve months.

Carlo turned and gave me a long glance. “Andrew Frattini was found dead in the alleyway behind the ReCareering office.”

The nightmare couldn’t be starting again. This time with different players but still with the same intent. To pin the murder on me. But that strategy wouldn’t work. I had an iron-clad alibi no one could refute.

Carlo dressed quickly. He picked up his phone and then turned toward me. “Stay clear of this, Gilda.”

“How can I ignore it?” I said as I felt myself tearing up. “Someone’s trying to frame me again.”

He leaned over and kissed me. “Well, they didn’t succeed, did they?”

Bio
In 2008, Joanne Guidoccio retired from a 31-year teaching career and launched a second act that tapped into her creative side. Slowly, a writing practice emerged. Her articles and book reviews were published in newspapers, magazines, and online. When she tried her hand at fiction, she made reinvention a recurring theme in her novels and short stories. A member of Crime Writers of Canada, Sisters in Crime, and Romance Writers of America, Joanne writes cozy mysteries, paranormal romance, and inspirational literature from her home base of Guelph, Ontario.