Yesterday, I introduced my new release, When Darkness Whispers. Today, I’ll share an excerpt. Hope you enjoy it! 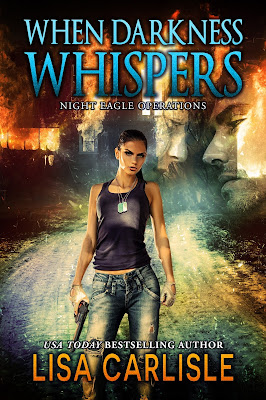 Some memories are better left forgotten…

Haunted by an unclear past, biologically enhanced Marine, Eva Montreaux, can’t be distracted from her mission. With American servicemen being brutally murdered on the island of Okinawa, it’s more than priority. It’s critical. But when her investigation brings her face to face with Marcos Delacruz, it triggers memories. Ones she lost. Memories that somehow include him.

Marcos Delacruz has tried to forget the woman who left him with nothing but empty promises. Even now, three years later, Eva doesn’t seem to express any guilt over breaking his heart. In truth, she seems to barely recognize him. This deployment has been challenging enough with too many restless spirits haunting the island. But when his own investigation forces him to cross paths with her once more, Marcos discovers there may be a deeper truth.

With the number of murders climbing rapidly and the rising need to track the murderer across the tropical island, Eva struggles to reclaim what she lost. But the island holds darker elements–a serial killer. One that doesn’t appear to be human.
Thrust into a world she can’t escape, Eva must discover a way to stop a murderer from destroying anyone else’s future, but how can she succeed if she can’t even remember what role Marcos played in her past?

When Darkness Whispers is a paranormal romantic suspense novel you won’t want to put down! Go undercover with a supernatural team into a world of vampires, gargoyles, shifters, demons, and ghosts. If you like haunting mystery, spine-tingling suspense, and Japanese mythology, you’ll love When Darkness Whispers!

“Wow If I could give this story more than 5 stars I would... Suspense, Mystery, and Thrills all in one book.” ~ Book Nook Nuts“

What a fantastic page-turner that wowed me from the get-go! An action-packed, contemporary PNR must read full of suspense that kept me glued to my seat! … This has a fresh, new storyline, with great descriptions, full of surprises and witty dialogue with relatable characters that will keep readers engaged & turning pages just like I did!”  ~ Amazon reviewer

“An awesome read! I couldn’t put it down… Out of all the books I have read from this author, I have to say that this book is now my new favorite.” ~ Amazon reviewer

“Wow Ms. Carlisle has outdone herself this time. You have action, adventure, suspense, forgotten love, shifters, what more can you ask for.” ~ Amazon reviewer

“Where are you going, Eva?” Gunny Delacruz approached her.

She froze momentarily. He addressed her by her first name. Whatever their relationship was, it had been close enough for a first name basis in the military.

“I have to go,” she said, rushing over as a cab pulled over.

“I thought we could get a drink.” His voice lowered an octave, to a deep rich tone. “Talk about what happened.”

“You’re just going to leave?” His voice took on an icy edge. He grabbed her wrist, and his guarded expression dropped. His eyes darkened, flashing anger. “Without any explanation about what happened?” 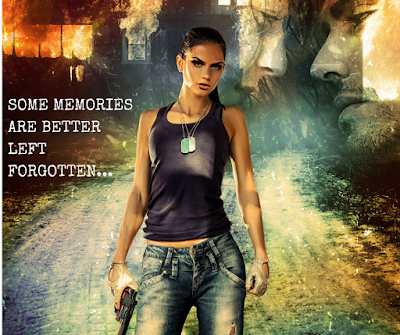 She yanked her arm back. “Don’t touch me like that, Marcos,” she warned. A flash of surprise hit as she heard herself call him by his first name, which was quickly replaced by fury. Who the hell was he to grab her that way?

Fire burned through her warning glare as she backed toward the cab. Her fury was mirrored in his stance—he balled his hands into fists and a vein throbbed in his neck. But he didn’t pursue her. She climbed in and heard him swear in what sounded like Portuguese as she slammed the door. Her heart raced from the unexpected interaction.

How did I know his name? And what am I supposed to explain?

After telling the driver her destination, she took a deep breath to relax her muscles. It was the first time the killer had struck since she’d arrived in Okinawa over a week ago, and she had to stay sharp. Willing the cab to go faster, she leaned forward to glance at the speedometer as her leg began to twitch.

When she turned back, Marcos had disappeared.

Who the hell was he?

She’d been content to leave memories of Afghanistan clouded, since wartime deployments were not the happiest of experiences. Something jarred in her mind, unleashing flashes of what she’d lost—which included him.

Why had she forgotten them?

Lisa Carlisle is a USA Today Bestselling author of romance and suspense. She loves stories with dark, brooding heroes and independent, caring heroines. She feels honored to be a multi-published author since she's wanted to write since the sixth grade. Her travels have provided her with inspiration for various settings in her novels. She was deployed to Japan, backpacked alone through Europe, and lived in Paris before returning to the U.S. Now she lives in New England with her husband, two children, a cat, and many fish.

Visit her site to sign up for new releases and free reads! http://www.lisacarlislebooks.com/subscribe/