Do You Find The Outdoors Relaxing?

Congratulations to "Lauren B." and "Theresa Z.", the winners in Katee's giveaway. Thank you to all who participated!

We all have those teachers we remember, for better or worse. One of my favorites was my ninth grade English teacher. He was a little bald guy with a sly sense of humor—usually at the expense of us students. He challenged me in a big way, helping me find books that I ended up loving for my reading outside of class.

But the most lasting impression came by way of our short stories segment. He started with The Lady or the Tiger, and things went darker from there. The Lottery, The Veldt, The Monkey’s Paw. And one of my personal favorites—The Most Dangerous Game. All of those creepy stories have been bouncing around in my head ever since, and never more so than when I’m plotting and drafting my romantic suspense stories. 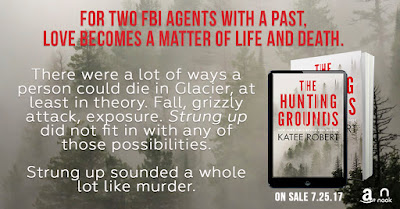 The Most Dangerous Game, in particular was one jumping off point for The Hunting Grounds. There’s something inherently terrifying about a hunter who’s decided that humans would make better prey than animals. Suddenly, being human isn’t enough to keep you at the top of the food chain—because you’re being hunted by someone who’s just as smart, just as clever…and more prepared than you could ever be for a mad dash through the woods.

The majority of murder mysteries have an element of this feeling in them—the story is usually a push and pull between the hero/heroine and the killer, though the role of hunter and hunted change depending on the story. But for The Hunting Grounds, I wanted to take the story to its most literal interpretation—the killer is actually hunting and killing people in Glacier National Park.

I’ve been to Glacier once or twice over the years, and it’s one of the most humbling experiences. The mountains tower over you, the beauty is breathtaking, and it feels like a layer of civility is ripped away. Out there on the trails, miles and hours away from anything resembling civilization, and you start to have an inkling about what it was like not to be at the top of the food chain. Now, Glacier is one of the safest parks out there in terms of the numbers—it doesn’t even hit top five when it comes to national park deaths—but you still spend a bit of time thinking quite vividly of all the things that could go wrong.

Or maybe that’s just me.

For The Hunting Grounds, I followed that thought all the way down the rabbit hole. What’s the worst that could go wrong? Well, you could be being hunted by someone who is better equipped, better prepared, and has the element of surprise on top of all that. No way to call for help. No way to effectively defend yourself—from either killer or the elements. Several days’ hike to get to a road. And if someone does hear you scream, they’re almost certainly too far away to be able to help.

Where do you fall on the outdoorsy spectrum? Do you find it relaxing? Or does is creep you out like crazy?


Katee is awarding an ecopy of THE DEVIL'S DAUGHTER to two lucky readers leaving a comment or email entry. 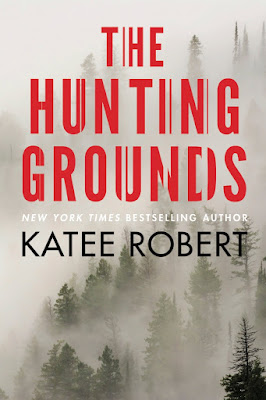 For two FBI agents with a past, love becomes a matter of life and death in the new Hidden Sins novel from New York Times and USA Today bestselling author Katee Robert.
Maggie Gaines used to be an FBI agent—top of her class and one of the bright, up-and-coming stars—until she spectacularly fell apart during her first high-profile case. That was eight years ago. Now she’s a ranger at Glacier National Park, and she’s found some measure of peace. But when the body of a murdered woman is discovered, she must finally put the past behind her and work with the one man she thought she’d never see again.
For months, Vic Sutherland has been hunting a killer who’s been targeting unsuspecting hikers in national parks—and now the predator has come to Glacier. Vic knows the case will bring him face-to-face with his former partner, yet nothing can prepare him for seeing Maggie again after all these years, or for the memories of passion it stirs in both of them.
As the investigation brings them closer together—and closer to the killer—Maggie and Vic fear they have only each other to trust. But even that might not be enough to make it out of Glacier alive.


Praise for The Hidden Sins Series

“…a captivating read, made all the more rewarding when good triumphs.” —Washington Post

“Robert shows off her impressive versatility in this fast-paced and inventive new Hidden Sins series. The small-town setting is a masterful blend of quaint and oppressive, which ratchets the menace and thrill factor. The protagonists carry the full weight of their pasts with them, making their growing relationship as compelling as the mystery element in The Devil’s Daughter. With plenty of twists and betrayals, this is a book that is sure to earn Robert a wealth of new fans.” —RT Book Reviews

Other Books in the Hidden Sin Series

About Katee Robert
New York Times and USA TODAY bestselling author Katee Robert learned to tell her stories at her grandpa’s knee. Her 2015 title, The Marriage Contract, was a RITA finalist, and RT Book Reviews named it 'a compulsively readable book with just the right amount of suspense and tension."  When not writing sexy contemporary and romantic suspense, she spends her time playing imaginary games with her children, driving her husband batty with what-if questions, and planning for the inevitable zombie apocalypse.

Giveaway ends 11:59pm EST July 23rd. Please supply your email in the post. You may use spaces or full text for security. (ex. jsmith at gmail dot com) If you do not wish to supply your email, or have trouble posting, please email maureen@justromanticsuspense.com with a subject title of JRS GIVEAWAY to be entered in the current giveaway.