Congratulations to "LibraryPat", the winner in Elizabeth's giveaway. Thank you to all who participated!

On her first day on the job as a forensics specialist, Shaye Mallory quite literally walked into the man of her dreams.  She managed to stay on her feet that day, but she fantasized about police detective Cole Walker for the next two years, all the while knowing it would never be more than a fantasy. 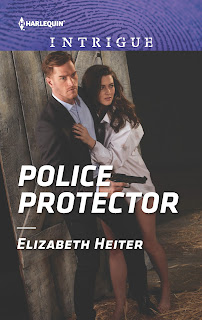 Then a drive-by shooting at the police station that nearly killed her drove her out of police work, and out of constant contact with Cole.  Finally, after a year away, Shaye worked up the courage to return – only to be shot at again!  This time, she’s targeted at a grocery store parking lot, and from the off-the-books protection detail Cole has set up around her, she fears the gang responsible for the first shooting is back and after revenge for her testimony.
As the leads spiral into too many directions and Shaye wonders if she’ll ever feel safe again, she realizes one thing.  Life is too short not to go for what you want.  So, while Cole is at her house, keeping her safe and trying to run down the details of who might want to hurt her, Shaye makes a decision.

From the moment she’d met him, she’d put him up on a pedestal: her ideal, unattainable man. As a couple maybe they’d never make sense—she didn’t know what kinds of women he dated, but she knew he wasn’t shy. He went after what he wanted, and he’d never chased her. Not even close. But there was no question he was attracted to her.

She lived her life cautiously, always had. The biggest risk she’d ever taken was moving across the country for a job, but plenty of people did that without a second thought. Maybe for once she needed to stop thinking about all the consequences, stop worrying about the fact that there was no future for her with a man who ran into gunfire without hesitation. Maybe it was time to live for today.

Cole was heading into the family room, clearly expecting her to follow, probably planning to get back to work, tracking down anyone with a reason to hurt her.

The reminder strengthened her resolve. There was actually a gunman hunting for her. If he caught up to her, what would she regret not having done in her life?

Right now every answer she could think of involved Cole Walker.

She took a fortifying breath and followed him. It was time to stop having regrets…

Giveaway:
For a chance to win a signed copy of Police Protector, share a leap of faith you’ve taken (or one you’d like to!) 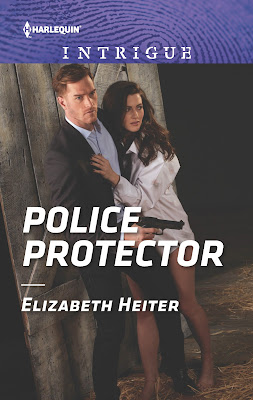 She's become his whole world - and she's under fire

Ever since forensics analyst Shaye Mallory survived a police-station shootout, Detective Cole Walker has felt personally responsible for her wellbeing. Then another shooter takes aim at Shaye. Cole decides the only thing he can do is stay right by her side until he finds the man who wants her dead.

Cole knows that he must set aside his attraction to Shaye if he's going to do his job. But as the days - and nights - go on, it becomes harder and harder to resist his feelings. And, as danger moves ever closer to them both, Shaye realizes that her safety might cost her the life of the man she loves.


Giveaway ends 11:59pm EST June 22nd. Please supply your email in the post. You may use spaces or full text for security. (ex. jsmith at gmail dot com) If you do not wish to supply your email, or have trouble posting, please email maureen@justromanticsuspense.com with a subject title of JRS GIVEAWAY to be entered in the current giveaway.