Congratulations to "Gina Marie", the winner in Constance's giveaway. Thank you to all who participated! 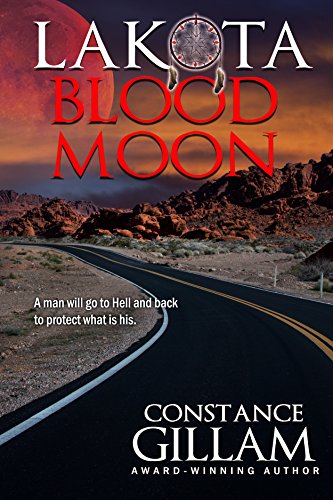 A MAN WILL GO TO HELL AND BACK TO PROTECT WHAT IS HIS.Police Captain John Iron Hawk’s life is a speeding vehicle down a deserted road. A road with his tormented past looming at his back and a future summed up by the black thunder clouds building on the horizon.
His relationship with his daughter is nonexistent. And he can’t seem to say the words to the woman he loves to make her stay.
When Zora Hughes receives a job offer from Cosmopolitan magazine, she knows she has to take it and reestablish her career on the New York fashion scene. She has nothing to keep her on Little River Reservation, even if John is the only man she’s ever trusted or loved this completely. John’s life is his job, and he has little left over to build something with her.But when a psychopathic killer turns their world upside down, they must dig deep to find the strength to outwit an adversary who will strip them of everything they hold dear…including each other.

Morning sunlight blasted through a break in the curtains straight into John Iron Hawk’s tired brain. Four domestic call-outs last night, three drunk and disorderly, one battery at the casino, a dead bull moose, and one mangled Land Rover. He’d given his deputy the night off.
“You awake?” Zora’s voice cut through his mental cataloging.
“Yeah.” He spooned her with his body.
“God, you’re hot,” she muttered.
“All the women tell me that.”
She groaned, a rusty laugh followed. “Wilma Dull Knife’s eighty-year-old grandmother doesn’t count.”
“She’s got good taste.” A comfortable silence stretched between them. He traced the line of her hip, letting the hypnotic motion lull him back into a semi-drowsy state. These few minutes with her in the morning, before the insanity of his job intruded on their peace, were the highlight of his day.
Her body tensed beneath his palm.
“I got a call from Cosmopolitan yesterday.”
He stopped stroking. His heart rate kicked up a notch. Here it was, the news he’d been dreading. New York was calling. He resumed his stroking. “Oh, yeah? What did they want?”
She flipped onto her back and stared up at the ceiling. He stared at her. Even first thing in the morning she was beautiful, all caramel-colored, full-lipped, and bright-eyed.
“To let me know Odessie Adomoyero was leaving and to ask if I was interested in her position.”
John swallowed the lump in his throat. “And you said?”
“That I’d think about it.”
She scooted up until her upper body rested against the head board. The sheet fell to her waist, exposing her breasts. He reached up and ran a finger around one dusky-colored nipple. Knowing she might leave and go back to New York didn’t stop his dick from lengthening. Morning sex with her had always been good. He took a deep breath and dragged his eyes away from her body. Now was not the time. Now was the time to tell her how much he loved her and wanted her in his life.
“John, do you want this relationship to work?”
He opened his mouth to say yes but instead reached for the glass of water on the nightstand. He remembered his ex-wife asking a similar question. He hadn’t been able to say what she wanted to hear either. As much as he’d loved his daughter’s mother, he loved Zora more.
After chugging half the liquid, he replaced the glass. The water sloshed against the sides, in tune with the trembling of his hand.
His cell vibrated. He ignored it. “I—”
The phone did a violent dance across the wooden surface.
She turned away.
He grabbed the phone. “What?”
Silence. Then a hesitant voice. “It’s Oscar, Chief.”
John sighed and swung his legs out of bed. “What’s up?”
“We got a body.”
∞
Sunglasses didn’t help. Sun rays drilled through John’s skull like a laser. Not enough sleep and no coffee made him one evil son of a bitch.
He saw the buzzards as soon as he neared Eagle Crossing. The area was part of the abandoned quarry that had closed several years ago.
Oscar Levant met him on the road.
“What we got?” John asked as he crawled out of the Jeep.
Usually ruddy and sweating, his deputy was pale as the underside of a sage grouse’s belly. He opened and closed his mouth, then he turned his head and vomited.
John stepped away, surveying the area to give his deputy time to pull himself together.
Oscar tugged his shirt from his pants and swiped at his mouth, revealing more stomach than a woman pregnant with twins.
When the deputy had composed himself, he led John through a jagged opening in the fence that surrounded the quarry. Beer bottles, cigarette butts, and discarded condoms littered the path as he followed Oscar deeper onto the scarred land. Posted warning signs had been spray painted with graffiti.
As they drew closer to the spot, buzzards strutted over the ground, their wings and clawed talons, creating a small dust storm.
“Shoo.” Oscar waved his arms, trying to scatter the birds as they pecked at the drop cloth.
John squatted then drew back the drape. Long black hair obscured the face. Using a pen, he lifted the dirt caked strands. The skin around the one visible eye socket had been gouged down to the muscle. The probable death wound—a long jagged gash across the neck.
FACEBOOK | NEWSLETTER | WEBSITE

Giveaway:
Constance will be giving away a $10 Amazon gift card to one lucky reader leaving a comment or email entry.

Giveaway ends 11:59pm EST June 8th. Please supply your email in the post. You may use spaces or full text for security. (ex. jsmith at gmail dot com) If you do not wish to supply your email, or have trouble posting, please email maureen@justromanticsuspense.com with a subject title of JRS GIVEAWAY to be entered in the current giveaway.
Posted by Maureen A. Miller at 12:30:00 AM