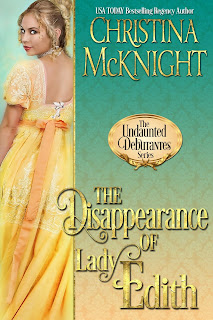 Three innocent debutantes must work to solve the mysterious death of their childhood friend. With undaunted determination they pledge to not only expose the man responsible for their friend’s tragic death on her wedding night, but to also uncover other unscrupulous men of the ton who would jeopardize the future of other young women.

The Disappearance of Lady Edith, The Undaunted Debutantes (Book One)

One tragic night changed sensible, proper Lady Edith Pelton’s life: when her best friend fell to her death, pushed down a flight of stairs by a nefarious lord.  Now, Edith dedicates her time to watching the man she thinks is responsible, while gathering information to expose other scoundrels posing as gentlemen of honor about London. When her spying is noticed by a perfect stranger, Edith finds herself with two mysteries—what happened to her friend, and how to win the heart of this brilliantly handsome lord.

Triston Neville, Viscount Torrington, has been tasked with two duties for the upcoming Season: see that his sisters make the most of their debut, and avoid embroiling himself in another scandal. What he does not expect is the captivating, fair-haired beauty that literally falls into his path. When the mysterious Lady Edith suddenly disappears without a trace, Triston fears his past misdeeds may have returned to destroy his life once more. 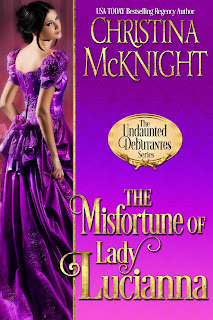 The Misfortune of Lady Lucianna, The Undaunted Debutantes (Book Two)

Quick-witted hellion Lucianna Constantine has no doubt who was responsible for the death of her dear friend. And she will stop at nothing to expose his transgressions—and those of every despicable man in London. Lucianna has witnessed the cruelty of London’s beau monde her entire life…starting with her own father. So she is more than willing to singlehandedly take down every vile man that crosses her path.

Roderick Crofton, the Duke of Montrose, had his entire family fortune stolen when his father trusted the wrong men. After a scandalous article surfaces in the London Daily Gazette, written by the notorious Mayfair Confidential columnist, Roderick finds himself financially destitute, without a betrothed, and lacking the means to find the lords responsible for duping his sire. With little option left, Roderick has only one choice: find another wealthy heiress to wed. His quest brings him to Lady Lucianna Constantine, and soon, he can’t deny that he wants her for more than just her dowry.

However, Luci has secrets that could change everything. And when Roderick uncovers what those confidences entail, it could mean misfortune for all involved. 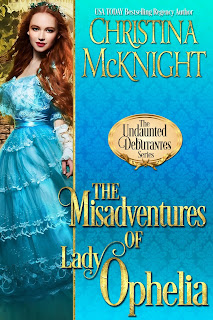 The Misadventures of Lady Ophelia, The Undaunted Debutantes (Book Three)

Quiet, reserved, Lady Ophelia Fletcher always has her nose stuck in a book; hence why she didn’t witness the death of her friend the fateful night of her passing. Now, she writes the Mayfair Confidential column to expose unsavory men as a way of making amends for not backing her other friend’s claims of murder. When a handsome stranger arrives to meet with her father, Ophelia is helpless to keep from investigating the dashing lord.

Colin Parnell, Lord Hawke, has a promise to uphold: find the book that proves his grandpapa worked as a spy for King George II and did not die as a no-good smuggler off the coast of Kent. Shrouded in mystery and scandal, the Parnell family has been at war with one another for decades, and Colin is determined to put a stop to it all by discovering proof of the family’s honorable past. Unfortunately, the book he seeks is in the hands of a fiery-haired beauty, and he’ll need to enlist Ophelia’s help to uncover the truth.

Ophelia is more than happy to use her skills to help Lord Hawke. But will their search for answers lead to misadventure, or will they get something greater than they bargained for: the truth and each other?

Her books combine romance and mystery, exploring themes of redemption and forgiveness. When not writing she enjoys coffee, wine, traveling the world, and watching television.

Almost there. Edith’s hands were mere inches from grasping the thick limb to lower herself…only six feet from escape.

“You, there!” a deep voice sounded behind her. “What are you doing up there?”

“Eeep!” The sudden exclamation took her mind off the limb she reached for, and Edith’s boot caught on her skirt, causing her to miss the branch completely. She stiffened her body as she fell, bracing for the impact she knew was to come as the air rushed by her.

Giving her ample time to contemplate what she’d done in her life to end up falling from a tree in the fashionable St. James area of London, her arms pinwheeling as she hoped to ease her landing.

She blinked several times and willed her mind to command her fingers to wiggle and her toes to curl in her boots.

She said a silent prayer to whoever was looking out for her.

“I asked what you are doing on my property!” the man huffed.

Edith blinked again—still complete darkness. Maybe she had hit her head on the way down, but would it not ache?

“Do stop this ridiculousness and remove your garments from your head.”

She moved silently, rolling to her side, a resounding pain in her backside cluing her in to exactly how she’d landed.

Lifting her hands, Edith pushed at whatever covered her sight, only to see a pair of Hessians solidly placed beside her. Lowering the material farther, she noted thick, muscular calves leading to tree trunk-sized thighs clad in tightly tailored breeches.

Edith cringed, allowing the material to fall back into place, blocking out all view of the man once more.