On the Run with a Romance Heroine

Congratulations to "Joan V.", the winner in Elizabeth's giveaway. Thank you to all who participated!

What if you overheard someone take a bribe and when you confronted him about it, he warned you that if you told anyone, you’d be dead?

What if that person was your husband?

And what if he was also a cop? 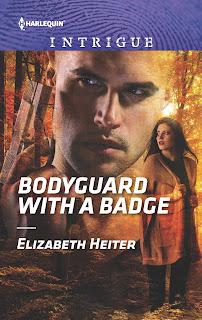 In Bodyguard with a Badge, the first book in my new Lawmen: Bullets and Brawn miniseries, that’s exactly what happened to Juliette Lawson.  Still, she tried to do the right thing and turn him in, but her husband had set the stage so no one believed her.  He was not happy when he’d found out what she’d done…

Fast forward three years and Juliette is still on the run, desperately trying to stay one step ahead of her ex-husband.  He’s caught up to her too many times before, causing her to run again in the middle of the night.  Now, she’s been in Virginia long enough that she’s really started to feel at home.  Until gunmen barge into her office and take her out into the woods...

And she knows exactly who sent them.

She thinks her life is over when FBI Hostage Rescue Team agent Andre Diaz appears out of nowhere, a blur of soft brown eyes, intense stare, and bulging muscles, taking down the gunman.  But back at Quantico, agents want Juliette to answer questions that she knows will bring her ex-husband straight to her location.  And history tells her they’ll hand her right over to the decorated police officer.  So instead, she takes Andre hostage!

It’s supposed to be a temporary solution, a way to get herself away from Quantico and out of town, but when Andre offers to help her, it’s too tempting to refuse.  Problem is, Andre may also be too tempting, and even if Juliette could trust herself enough to open up her heart again, loving anyone is way too dangerous.

You can learn more about Bodyguard with a Badge at my website: http://www.elizabethheiter.com/bodyguardwithbadge.html


Giveaway:
And you can be entered to win a signed copy right here!  Just comment and share some of your favorite characteristics of a heroine.

Bodyguard with a Badge Excerpt:
He stared directly into her eyes, intense and sincere. “I believe you.”

She stamped down the hope she felt at his words, tried to be logical. “Why?”

“My gut is telling me you’re innocent.” His gaze went to the gun and then back to her face.  “Relatively innocent.”

A smile twitched her lips, and she felt the sudden, ridiculous urge to laugh at the predicament she’d gotten herself into. She’d never so much as gotten a parking ticket her whole life and in one day, she’d stolen a gun off one federal agent and taken another one hostage.

A shiver worked its way up her body that had nothing to do with fear. Letting her attraction for this man lull her into trusting him was a bad idea. Whether or not he believed her story, he was still a federal agent. 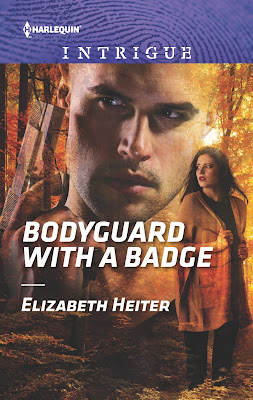 Bodyguard with a Badge

Take the shot - or take a chance?

FBI sniper Andre Diaz is used to rescuing civilians, but after he saves a woman from armed gunmen, she takes him hostage. Nothing about Juliette Lawson or the hostage situation adds up, and Andre's determined to figure out the truth. Going into hiding with the mysterious woman seems like a good idea at first, but he soon discovers her secrets could get them both killed.

Juliette Lawson has been on the run for three years when her luck ends. Grabbing Andre seemed like a temporary solution to get out of FBI questioning – and stay off her dirty cop ex-husband's radar. But it's too late, because now it's not just her ex after her, but a dangerous criminal desperate to tie up loose ends. With each day in hiding, she falls harder for Andre. But as her ex-husband and a killer close in, the only way to keep Andre safe may be to sacrifice her own life.

Giveaway ends 11:59pm EST May 25th. Please supply your email in the post. You may use spaces or full text for security. (ex. jsmith at gmail dot com) If you do not wish to supply your email, or have trouble posting, please email maureen@justromanticsuspense.com with a subject title of JRS GIVEAWAY to be entered in the current giveaway.
Posted by Maureen A. Miller at 12:30:00 AM