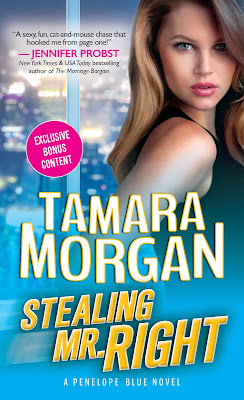 What's that saying? Keep your friends close...and your husband closer.

Being married to a federal agent certainly has its perks.

1. I just love the way that man looks in a suit.
2. This way I always know what the enemy is up to.

Spending my days lifting jewels and my nights tracking the Bureau should have been a genius plan. But the closer I get to Grant Emerson, the more dangerous this feels. With two million dollars' worth of diamonds on the line, I can't afford to fall for my own husband.

It turns out that the only thing worse than having a mortal enemy is being married to one. Because in our game of theft and seduction, only one of us will come out on top.

Good thing a cat burglar always lands on her feet.

Relying on instinct rather than sight, I ducked to the right, narrowly missing another well-aimed projectile. I paused to form one of my own. “You play dirty, don’t you, Emerson?”

“Absolutely.” With a flying leap, he dove out of the way, rendering my poor snowball null and void. I’d had really good aim, too. “If there’s one thing you should know about me, it’s that I play to win. Every time.”

“I’ve always thought that was such a stupid statement,” I said. Now it was my turn to dive, and I gave him a glimpse of my criminal derring-do with a tuck and roll that had me safely ensconced behind the wheel of the oversized Jeep we’d rented to drive down. Snow nipped down the collar of my jacket, and I could feel the damp seepage of my jeans pressing against the packed ground below, but I didn’t care. Especially when the sound of two snowballs on the other side of the vehicle meant they missed me by a huge margin. “Everyone plays to win. Otherwise, why would they bother starting the game at all?”

He didn’t respond right away, so I dared to look over the top of the car’s hood. He wasn’t in sight, which immediately put me in a panic. Already, I was coming to learn about his catlike grace, the way he could sneak up on people out of nowhere. Arming myself with a well-packed snowball, I crept along the side of the car, my eyes scanning for any sight of him.

I didn’t get far. A hand grabbed my ankle and yanked, sending me—and my trusty snowball—sprawling. Before I had time to react to the sight of Grant wriggling out from underneath the SUV, he had me pinned to the snow.

Being overpowered like that, so easily and thoroughly and without a moment’s hesitation, was exhilarating. The ground was hard and cold beneath me, but that hardly seemed to matter with such a hard and hot body on top. Grant wasted no time pushing the knit cap off my forehead and claiming his victory kiss.

What a kiss it was. If I’d had any questions about whether we’d indulge in public displays of affection at his mom’s house, he laid them to rest with the force of two lips and one persistent tongue. Both of them pushed deeper and demanded more. Not that my lips and tongue were passive participants in this display, mind you. I might have lost this particular battle, but there was a long and fruitful war yet to be waged.

There were layers of winter clothes between us, but we might as well have been naked for how my body reacted to his touch. This marked the first time Grant and I had kissed horizontally—and if you think that isn’t a distinction worth noting, then you’ve never been kissed horizontally by someone like Grant before. See, he didn’t just kiss with his mouth. With him, it was a full-body effort, every muscle working hard to achieve its aim.

Vertically, this meant he constantly pushed me into things. Walls, tables, the side of his car—anything that would allow the press of my breasts against his chest, the hard lines of his muscles seared against me in ways that tormented me long after we said good-bye. Technically, we never did more than lock lips, even if the frantic way our bodies molded against each other signaled a need for more.

Now that we were on the ground, it was impossible to keep things at that level. I wanted to crawl inside the warm culvert of his body and burrow there. I wanted to open my legs and let him settle firmly between them. I wanted him inside me so badly, it had become more than a physical ache—it was a physical void, a phantom limb, the searing pain of knowing that I was missing a vital part of myself.

I probably would have done it, too. Had sex with him right there on a snow-covered driveway, my ass a block of ice, his mom a few yards away baking Christmas cookies in anticipation of our arrival.

Fortunately, Grant released a soul-deep groan and pulled himself away. Well, the top half pulled away. The bottom half only ground into me harder, reminding me how easy it would be for him to maneuver a few zippers and answer all my prayers.

“You’re terrible at snowball fights,” he said. “Did you know that?”

“I do now.” Unable to help myself, I wriggled against him, eliciting another one of those rugged groans and making me feel like the most powerful woman in the world. “Do you want to know what I am good at?”

Contrary to my expectations—and my hopes—he didn’t ask me to provide an answer. He didn’t even smile. He just remained on top of me, his desire still very much a presence between us.

“I wasn’t kidding before, you know,” he said.

I blinked up at him, confused. What wasn’t he kidding about? That he wanted to decimate me with handfuls of snow?

“I play to win, and I don’t always fight a fair game to do it.” His voice was rough, and it grated against my heart. He wasn’t talking about the snow at all.