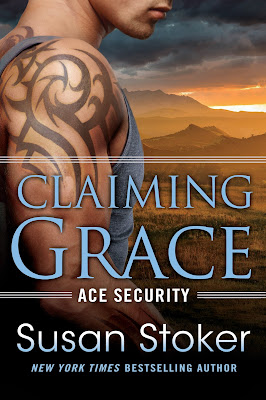 For Logan Anderson, moving on from a traumatic past means moving back to his hometown of Castle Rock, Colorado, to start a personal-security business with his brothers. But it’s not long before Logan runs into Grace Mason, his best friend from high school…and the woman who never answered his letters during his Army years.

Grace was pleasantly surprised to see Logan return to Castle Rock, despite their falling-out ten years ago. Everyone always assumed they would end up together, including Grace, who had eyes only for him. But as Logan eventually escaped their town, Grace got pulled further into her family’s controlling grasp—and farther away from the man she loved.

Now, united by scars both visible and not, the two must fight to free Grace from the suffocating hold of her family. But the Masons won’t let go easily—and they’ll do whatever it takes to keep the couple apart.

“I like her. A lot. Always have. Even though we’ve only kissed once, right before I blew out of town, it’s still the most memorable kiss I’ve ever shared with a woman. And all we did was touch lips. When I thought she’d dumped me, it stung. I went a bit crazy, was with a few women who offered, got in fights just to fight. After a while I tried to date. I found a couple very nice women who would make excellent wives and mothers. No go. I didn’t feel half the spark I felt when I was around Grace.

“When I got back in town I stayed away from her. I didn’t want the fantasy I had in my head of who she was to get tarnished. Even though I thought she deliberately hurt and misled me, I couldn’t get her out of my head.”

Logan took a deep breath and looked at his friends. They weren’t looking at him in pity, but with compassion and empathy. He continued.

“All it took was five minutes in her company, and all the feelings I’d had when I was eighteen came rushing back . . . tenfold. She was exactly as I remembered . . . and more so. So, yeah, Felicity, I care about her. A lot. Maybe she doesn’t want anything to do with me. Maybe she just wants to be friends. But I don’t think so.”

“I don’t think so either,” Felicity agreed. “I’ve never seen her so . . . giddy as she was that last night I saw her. If I had my way, I’d lock the two of you in a room and leave you there for a week.”

“I’m not sure that would get her out of my system,” Logan said dryly.

“I hope not. I’d do it so you could both get under each other’s skin so far you wouldn’t be able to live without the other. But, I have to say it. Don’t hurt her, Logan. I’ll cut off your balls if you do.”

“I won’t.” Logan managed to not even flinch at her choice of words.

Logan’s lips quirked and he looked over at his brother. “Blake? You’re the best at this kind of thing.” Logan wanted nothing else than to barge into the house on the hill and steal Grace away, but he knew he had to be smart. The last thing he needed was to be thrown in jail on kidnapping charges and to have Ace Security shut down. They had to be careful. And if that meant letting his brothers take control, he’d do it. 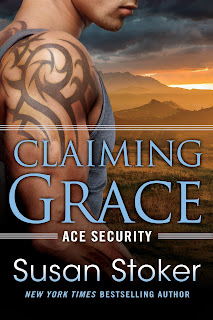 “We’ll take turns watching the house, out of range of their cameras. We’ll take pictures and see if we can’t get a glimpse of Grace through the windows. Take note of who is coming and going and see if we can’t get any information out of any of them once they’ve left the Mason house. Delivery drivers, visitors, employees. We’ll get as much from them as possible, then decide on our next move.”

“How long?” Logan asked. “If Grace is being hurt, we can’t wait. Talking to everyone who visits the house will take too long.”

“I’m not sure. I don’t want her in that house any longer than she has to be either, but we have to play this smart,” Blake said evenly.

“Fine. But if we get any indication that she’s being hurt, we’ll make a move.”

“I swear, Logan. Now, let’s make up a schedule as to who is doing what, when,” Blake said, shuffling some papers in front of him.

The group huddled over the table discussing the best vantage points to the Mason mansion and who would take first watch.

The four men and one woman had made an unofficial pact to get to the bottom of what was going on inside the walls of Grace’s prison. One way or another.

Susan Stoker is a New York Times, USA Today, and Wall Street Journal bestselling author whose series include Badge of Honor: Texas Heroes, SEAL of Protection, and Delta Force Heroes. Married to a retired Army noncommissioned officer, Stoker has lived all over the country—from Missouri to California to Colorado—and currently lives under the big skies of Texas. A true believer in happily ever after, Stoker enjoys writing novels in which romance turns to love. To learn more about the author and her work, visit her website, www.stokeraces.com, or find her on Facebook at www.facebook.com/authorsusanstoker.