Congratulations to "Janet K.", the winner in Lily's giveaway. Thank you to all who participated!

In the past month’s whirlwind launch of my first romantic suspense, one question that popped up repeatedly is why I write. And there are so many answers to that question! One of them, for me, is the chance to live moments of another life through my characters. For example, I’ve always thought being a librarian would be cool, so it was a delight to explore that in Storm of Attraction, as my heroine’s day job.

I also have a dozen food allergies—no exaggeration—of which several emerged after my reaching adulthood. This means the foods I have given up may be something I enjoyed just a few years ago! However, when I feature a forbidden food in my book, I can enjoy it vicariously through my characters. One of the foods I particularly miss is shrimp. So guess what I had my hero fix, as one of his delicious Mediterranean dishes the first night Alexa seeks safety in his home? Shrimp couscous, of course!

When I write, the transport into other lives is always balanced by a grounding in things I share with my characters, but there’s no denying the thrill of living vicariously and enjoying a few forbidden fruits in the process. The scene I’ve shared below is definitely one of those, as it not only features my oft-denied beloved shrimp, but taps into my longing for delicious exotic foods. Enjoy! 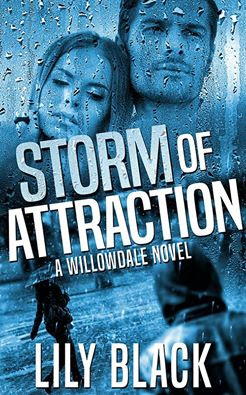 Love is worth fighting for.

Alexa Wolving has just one rule: never give a guy a second chance. That works just fine in the safe life she’s built. In the charming town of Willowdale, her day job as a librarian balances perfectly with her evening job as a black belt instructor. But when she attracts the attention of a stalker, Alexa’s carefully built world begins to crumble.

Drew Cosimo knows he broke Alexa’s heart five years ago when he took his first Ranger assignment and disappeared from her life. Now that he’s out of the army, he’s moving back home to Willowdale. He’s not looking for a fight, but making peace would be easier if Alexa hadn’t told the entire town he was a money-grubbing jerk. Despite the tension between them, Drew is quick to offer his protection when a stalker forces Alexa from her home.

As the stalker’s attacks escalate, Alexa and Drew are forced to face their painful past and the simmering attraction between them. They must fight to save each other before everything they care about goes up in flames.

Excerpt from Storm of Attraction:
She stepped forward. “Clearly, I was wrong to challenge you. This all smells amazing.”
“An amazing meal for an amazing lady.” When she stopped short, Drew realized instantly that she took his comment as a compliment of her looks—and didn’t appreciate it. He plowed on. “What you did tonight, the way you handled yourself with your cats, you were amazing.”
Alexa flushed a little, but she continued to her chair and sat. Drew caught a scent of something citrusy as he pushed in her chair. Her hair fell in smooth waves of honey brown and looked incredibly touchable. She’d freshened up before she came out, he was sure of it, and his chest swelled a little that she’d taken the trouble. Drew took his own seat across from Alexa.
She cleared her throat, but her voice still sounded a little husky when she spoke. Maybe she was as nervous as he was. “What do we have here? I recognize some of these but don’t know their names.”
She sounded impressed, and Drew felt a flood of pride. “The one with the shrimp is couscous paella, and beside it is roasted eggplant and feta, which you can dip with pita chips. This orange soup is a pumpkin curry soup, and then of course there’s the salad, which has asiago cheese.”
“Wow.” Alexa’s eyes spoke her enjoyment, and she made an appreciative sound after popping in a chip full of the eggplant and feta.
Drew couldn’t help himself; he spooned up a bit of the pumpkin soup and passed it to her. “Here, try this.”
She barely hesitated before taking the bait, and when she did, her eyes flew wide open and her mouth made a sensuous little pout. “Mmm, that’s good!”
Drew grinned and just managed to stop himself from spoon-feeding it to her.

Giveaway:
Lily will be giving away one ecopy from Amazon to a random commenter or email entry.

Author bio:
Lily Black believes in true love, but is also quite sure going after it is the scariest thing we'll ever do!  She explores this dynamic in her romantic suspense novels, which are set in the small imaginary town of Willowdale, where people dream big, love deeply, and kick butt if necessary.  She has a black belt in Chung Do Kwan Tai Kwon Do, and has also trained in everything from judo to broadswords.  She lives in North Carolina, where she works as a content editor for a small publisher, and divides her free time between the mountains and the sea with her very patient and loving husband and their teen daughter. She is also the co-creator of the Book Ninjas’ Blush-O-Meter. Readers everywhere search the Book Ninja’s online catalog for romance, YA and chicklit novels in all genres, and find books that match their blush level!

Her debut romantic suspense--Storm of Attraction—made its way into the world on February 13th, 2017 from Red Adept Publishing.  She welcomes you to join her on the journey!

Giveaway ends 11:59pm EST Feb 23rd. Please supply your email in the post. You may use spaces or full text for security. (ex. jsmith at gmail dot com) If you do not wish to supply your email, or have trouble posting, please email maureen@justromanticsuspense.com with a subject title of JRS GIVEAWAY to be entered in the current giveaway.
Posted by Maureen A. Miller at 12:30:00 AM