Hosted by F. Stone and 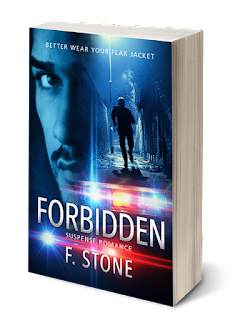 Year 2047, City of Samarra, capital of the Republic of Islamic Provinces and Territories
Fifteen American travelers have vanished. Surrendering to Mayor Aamir's demands, Captain Sharif becomes the reluctant keeper of his city’s bloody secret – and the witness, Eliza MacKay. The devout Muslim is horrified to discover that if he exposes the cover-up, his family will suffer dire consequences.

The CIA has the lying Sharif in their cross hairs. Sharif’s only hope is to prove his country's government is free of guilt. Secretly, he hunts forensic evidence. Cryptic messages, backstabbing informants, and corruption threaten Sharif’s resolve to see justice served. When he discovers the shocking truth, he and MacKay become the targets of a ruthless killer.
Sharif is tortured by his attraction to the impetuous Eliza MacKay. In spite of her struggle with PTSD, he’s drawn to her vivacious personality. Islam forbids the intimacy he craves. In desperation to save Eliza, Sharif plots an act most forbidden and fatal.

1.     Forbidden is written in the point of view of a devout Muslim, a Middle Eastern cop.

Captain Sharif’s police compound has been breached. Fifteen Americans murdered. CIA agent Frank Hutchinson has proof the cop is lying and has him in his crosshairs, eager to exact revenge. Captain Sharif must please his corrupt superiors; and yet see justice served, and abide by the Koran. He’s in hell, with no way to escape – either be buried alive or suffer Allah’s wrath. In the balance hangs the life of Eliza MacKay, witness to the massacre. Desperate, Sharif initiates an act most forbidden and fatal.
2.     The setting is the Republic of Islamic Provinces & Territories (RIPT) – my vision of the future of the Middle East. After the end of the current civil war, thirty years from now, I envision most of the Islamic countries joining to form one powerful nation. Sunni and Shia no longer are adversaries. The government is inclusive, democratic and Sharia law has been relaxed. At least one wealthy man objects to the change. He’s determined to destroy RIPT.
3.     Forbidden will enlighten readers on the basics of moderate Islam. I was guided by an generous imam, Mustafa Khattab; and a most wonderful friend who is a pediatrician and a Canadian Muslim. During the writing of the story, Dr. Sahar Albakkal provided valuable advice on the culture of moderate Muslims, Muslim names, Arabic terms, and interpretation of the Koran.

NOTE: There is some moderate vulgar language; and considerable violence in Forbidden’s story. I have avoided overly graphic details. I recommend Forbidden to adult readers. There is one feeble rape attempt scene – resulting in one furious Eliza MacKay eager for  revenge. Both men and women readers will find Forbidden unforgettable.

On our cattle ranch, when an animal was in distress or injured, I was put in charge of nursing it back to health. Never mind that I was just a kid and hated the sight of blood, but I had to muster up the courage to apply home remedies. My survival rate was pretty good. It seemed like a foregone conclusion that I would progress to nursing – humans. After one year into nurses training, I bolted. Bed pans and chronic diseases pushed me in different direction; a career of dealing with drug addicts, murder, suicide, fatalities, and biker gangs. In 1983 I graduated with honors as a paramedic and worked in the City of Edmonton’s Emergency Services.

For the next twenty years, I came face to face with scenes most people would rather not think about. I loved it. Having experienced life in the most deadly and gut wrenching events, and work alongside the police service, I gained the fodder for creating intense novels.

My first novel, The Guardian’s Wildchild, was published by Omnific Publishing in 2011. The setting is on a naval ship, under the command of a surely man who is under suspicion of treason. When a battered woman is brought to his ship for execution, he has no idea that she is about to turn his disciplined life into chaos – and that she is no ordinary woman. The Guardian’s Wildchild has a rating of 4.1 at Amazon.

Excerpt: The first five chapters are available to read for free at Amazon.


Below is one of my favorite romance scenes.

Buzz adjusted his speed and configured the Phoenix to climb. The mountain loomed another one hundred fifty miles in the distance. Snow in the higher elevations glistened in the sun among the jagged peaks.


“Better have a seat, Sharif. Going to get rough. Buckle up your friend, too.” Buzz turned to check on Miss MacKay. “Shit, what is she doing?”


She stood at the tail section in the aisle, wobbling with the aircraft’s movement on the wind currents. Her bare back faced the men. She appeared to be looking for something in her backpack.
Sharif lunged to stand behind her back, blocking the pilot's view of the semi-naked woman.
“What are you doing?” he growled. “This is not permitted.”
“I spilled hot coffee on my shirt. It burned like crazy. Just give me two minutes to change into a clean shirt.” Eliza shrugged him off. “Turn around.”
“You’re indecent.” Sharif knew he should tear his eyes away, and turn around. The shape of her back, the soft shoulders, and her curves reminded him of the undulating terrain of the Sahara. The waistband of her pants rested low on her hips. Fighting his body's traitorous desires, Sharif growled, "Get into the bathroom."
"Too damn small." Eliza snatched a black lace camisole from her backpack and held it against her chest. “Go back to Buzz. I’ll be properly dressed in two minutes.” The plane lurched to the right. Eliza lost her balance and placed her feet farther apart.
Sharif grabbed her around the waist and pulled her back snug against his chest. He whispered into her ear. “Eliza, when are you going to stop tormenting me?” He half-hoped she didn't hear his confession above the roar of the twin engines.
“Do you want me to shut off who I am?”
He felt her body tense as if preparing to fight him off, then melt into his wall of muscle and bone.
The intimacy threw him into panic. In the span of one breath, he felt the old inclination to shun the pleasure, even to feel repulsed by the bliss. Allah forbids. But his drive to be honorable refused to allow the lie. He could no longer deny that Eliza, the impetuous and insane woman who had the audacity to expose his humanity, had become very dear to him.
“No, never," he said, placing a brief kiss on the corner of her mouth. Though he met her just seven weeks ago, he knew her as if they had spent a lifetime together. He knew the cadence of her voice, the swing of her stride, and the nuances of her moods. He marveled at the light that shimmered in her hair and lived in her eyes. He knew the capricious scent of her body, and could spy on her thoughts through the tilt of her head and curve of her mouth. He found it mystifying at the depth to which he understood this woman, like no other. Wanted her, like no other.
The warmth of her body spread like a warm breeze into his. Numbed by isolation and practiced sacrifice, fragments of his passion flared out of control. Hashim Sharif moaned. He couldn’t tell where his body ended and hers began. The dim light of the aircraft cabin sighed over her shoulders. If not for the lace camisole concealing her most alluring charms, his lust would have ruled his actions.
Over the years, the words “I love you” had become mute, lost under the weight of perceived duty and disconnection with his emotions. He was Captain Sharif, the noble Muslim warrior. He was not Hashim Sharif, the good man, worthy of Eliza MacKay.
Soft and warm, her hands covered his. Sharif shivered with need - to declare to man and Allah, Eliza was his. A violent shake of the aircraft shattered his lustful intentions. Sharif straightened, and wrestled his inner cop back into control. Love was for people not running for their lives.
She buttoned up a fresh shirt, turned to face him and flipped up her hair under the police cap. “There, no harm done.”
He lifted his cap and slapped it back down. “Around my family, we’ll have to maintain physical distance. No unnecessary conversation.”
“You’re the boss.” She smiled and patted his chest. “Anything you want, it shall be done.”
For the next hour Sharif and Eliza rested, fitfully sleeping, half relieved to be away from the terror in Samarra, and yet anxious about finding a resolution to the Sharif family’s safety. Sharif bolted upright in his seat when Buzz shook him awake.
“There’s trouble in Rumi, Sharif,” Buzz hollered. “Captain Khattab and his men are setup to meet you on the tarmac.”