What is Romantic Suspense?

Congratulations to "Trude V.", the winner in Belle's giveaway. Thank you to all who participated!

First let me thank Just Romantic Suspense for featuring my blog on your wonderful website. It’s an honor to be hosted by you. 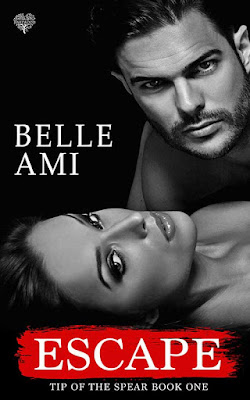 My new release Escape (Tip of the Spear Series Book 1) was published by Hartwood Publishing on January 10th. It’s the first book of my new romance/suspense/sexy series Tip of the Spear, which is the English translation for Kidon, the secretive arm of Israel's Mossad whose task is the elimination of enemies and the fulfillment of impossible missions.

When I decided to tackle the romance/suspense genre I had no idea where it would take me. I didn’t know anything about creating stories that not only had to satisfy a romantic ideal, but needed to weave a tapestry of suspenseful action. When writing romantic suspense, you’re writing about the impending disaster that needs to be stopped, the love that is threatened, and the consequences of events outside of the hero/heroine’s control. It’s the classic Hollywood theme, “Houston we have a problem”, now solve it. Whether it’s the solving of a murder or crime, a military hero being drawn into an adventure, or a man or woman searching for someone who’s disappeared, this genre is anchored in plot twists and obstacles that not only threaten love but in many cases the hero/heroine’s life and existence. It’s demanding to write and needs to be carefully plotted. You can’t just write by the seat of your pants. It requires research and expertise, whether it be the FBI, CIA, police force, or military wing. Every scene and chapter needs to grow the suspense, or as they say “the plot thickens” which is “a metaphor within a metaphor,” and is as apt a definition of romantic/suspense as you’re likely to find. If the suspense does not build to a climax, then you have nothing. If everything, including love, isn’t at risk then you better rethink your story. Writing is all about taking risks, and for me the joy of waking every day to the challenge of creating a suspenseful love story is something I’m willing to risk everything to do.

Yes, the future is bright for romance, and particularly bright for the romance/suspense genre.

My newest contribution to the romance/suspense genre is Escape, a sexy romantic thriller with a focus on the dangers of a nuclearized Middle East.

When Harvard student, Layla Rose Wallace and her Saudi boyfriend are kidnapped in Dubai and taken to Iran, a deep-cover Mossad agent is activated and given a mission. He is ordered to either get Layla out of Iran, or if failing that—kill her.

Cyrus Hassani is an assistant to the deputy director of Oghab2, Iran’s secretive intel organization with authority over their nuclear ambitions; he is a Mossad mole, gorgeous, sexy, and dangerous.

Fiery, auburn-haired, Layla Wallace is an art history doctoral candidate at Harvard, when on vacation she and her Saudi boyfriend are kidnapped in Dubai and taken to Tehran. As the daughter of a renowned nuclear physicist, she is a perfect target for blackmail. Layla’s kidnapping is about to create an international incident and blow Cyrus’s carefully constructed cover to smithereens.

When Cyrus first lays eyes on the feisty redhead he knows he’s in trouble. When they are running for their lives, he’s fighting not only a powerful adversary who’s vowed to destroy him for his treason, but an impossible attraction to a woman he’s struggling to resist.

Their escape from Iran seems impossible as all routes close, with their hunters in hot pursuit. Cyrus must overcome not only deadly assassins, but the passions that have lain dormant within his cold heart from years of living as a spy.

Can Cyrus and Layla survive and escape from Iran? Can a spy and a student find love? Time is running out. 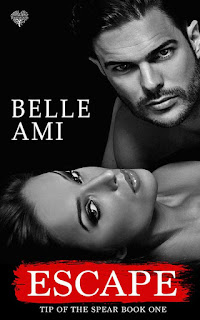 Escape (Tip of the Spear Book 1) Excerpt From Chapter 6
“Where is she?” Cyrus growled as he followed the guard down corridor after corridor. Finally, at the end of an isolated hallway, they stopped. He heard a muffled cry from behind the steel door. Drawing his ZOAF PC-9 pistol, he pushed the female guard out of the way and kicked open the door.
Anger flooded his nerve endings. His finger pulsed on the trigger, itching to fire. Cyrus hated Mohammad, but never more than at this moment. Everything he detested in his fellow man—the cruelty, the abuse of power, the ignorance and disrespect for human life—every vile human characteristic lived in this one individual. With pleasure, he would have shot and killed Mohammad, ending the life of an animal who didn’t deserve to live. Had Mohammad actually raped her, Cyrus would have killed him on the spot but he had arrived just in time. He controlled his impulse to exact punishment. His plan of action did not allow for deviation. He needed to stay focused on the goal of getting Layla out of Evin Prison.
In Farsi he ordered, “Put your hands up, Mohammad, and don’t move.” In English he asked the girl, “Are you all right?”
Mohammad slowly raised his hands. “Don’t shoot, Agha. I can explain. The girl is a witch. She seduced me.”
Layla, shielded by the hulking frame of her assailant, slowly rose from the table, raising and securing her pants. “Yes, I’m okay, but this animal was about to rape me.” Still in a shooter’s stance with the gun trained on Mohammad, he ignored the man’s ridiculous statement. “That isn’t going to happen, Miss Wallace. You’re safe now. Just do as you’re told and get behind me.”
When the girl emerged from the shadow of Mohammad, Cyrus temporarily lost his focus. His pulse quickened and his gut tightened in an automatic response to her beauty. Even as her face darkened with swelling and bruises, distorting her features, he found himself drawn to the large, turquoise eyes, the glorious auburn hair, and her luscious lips. With a mighty effort, he regained his composure, reluctantly dragging his eyes from her.
»»•««
Layla, shaky on her feet, held fast to the table for support. Her heart still pounding a fearful arrhythmic beat, she tried to regain her composure. Tears welled in her eyes from her close call. A miracle had occurred, and someone had saved her. Following her hero’s command, she emerged from the shadow of her would-be rapist. Her eyes met those of her rescuer. The tall, dark man’s face was angry and unforgiving, his gun pointing at her assailant. When he looked at her, for a moment his expression softened, and then just as quickly, his emotions flickered and died, becoming unreadable.
Indicating the door with the barrel of his pistol, he commanded, “Let’s go. You’re through, Mohammad. As much as it would please me to kill you, I’m going to let you live today, which is better than you deserve.” He turned, glancing over his shoulder at her. “Take the chadar and put it on. The fewer people who get a good look at you, the better.”
Layla complied without answering. She wanted to grab the man who had rescued her from the monster and kiss him, but she was still reeling from her close call.
From the moment they left the room, everything proceeded at a rapid pace. The man remanded her attacker into the custody of a commanding officer, to whom he gave a brief account of what had occurred. Led away in cuffs, looking like the devil’s dog, Mohammad delivered a curse on her rescuer and brandished his fists in a threat of vengeance.
Her deliverer turned away, ignoring him. He whispered a reassurance, “Don’t worry, Miss Wallace, you’ll be out of here very soon.”
A female guard took her arm and led her back in the direction of her cell. Before the doors to the cell block closed, she turned her head and caught a glimpse of the man who had saved her. His gaze was fixed on her.
She felt her cheeks grow hot, but she couldn’t look away. The tiniest of smiles teased his lips.
»
Belle Ami Bio
Belle Ami writes romantic/suspense with a teaspoon of sex. Her latest book Escape (Tip of the Spear Series Book 1) was published January 10, 2017. Coming 2017 the sequel Vengeance will be published by Hartwood Publishing. She lives in Southern California with her husband, two children, a horse named Cindy Crawford, and her brilliant Chihuahua, Giorgio Armani.

Giveaway:
It will be my pleasure to giveaway my July 13, 2016 release One More Time is Not Enough.

Giveaway ends 11:59pm EST Jan. 21st. Please supply your email in the post. You may use spaces or full text for security. (ex. jsmith at gmail dot com) If you do not wish to supply your email, or have trouble posting, please email maureen@justromanticsuspense.com with a subject title of JRS GIVEAWAY to be entered in the current giveaway.