Congratulations to "Brooke B.", the winner in Lena's giveaway. Thank you to all who participated! 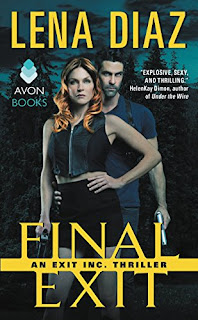 January 31, 2017 marks the release of the third book in my EXIT Inc. series, FINAL EXIT. It features Kade Quinn, an FBI agent who has been through a horrific tragedy that sent him spiraling out of control into the dark world of addiction. He’s been given one last chance to redeem both himself, and his career, by leading the capture and “re-training” of the clandestine Enforcers (assassins) who once worked for EXIT Inc. But it’s one of those Enforcers, sexy and sassy Bailey Stark, who shakes up his world once again. She makes him doubt his mission and blurs the lines between the good guys and the bad guys. These former enemies are forced to work together to uncover a chilling conspiracy before anyone else dies, including themselves.

I loved writing about Kade and Bailey, two very complicated people with tons of emotional baggage who have to learn to trust each other in order to survive. It was also rewarding to finally tie up all of the loose ends from this trilogy, which really spanned four books if you include what was basically a prequel book, TAKE THE KEY AND LOCK HER UP.

So why was it the hardest book I’ve ever written?

Not mine. My husband’s.

But when someone you love is given that dreaded diagnosis, suddenly your world is filled with doctor visits, medical tests, research, treatment decisions, and on and on. I’ve heard about other authors who’ve kept writing through these types of challenges, but I’m not one of them. I couldn’t focus on my books when my every thought was about my husband and what we were going through together. So I told my publisher and we moved the book’s due date out six months. That’s why this last book in the EXIT trilogy is coming out a year since the second book.

My husband is cancer free today and doing well. He fought the good fight and won, which makes seeing FINAL EXIT make it out into the book universe even more satisfying than with previous releases. It’s the final chapter of this series, and also the final chapter of a difficult, trying time in my husband’s life and mine. It’s a victory, of sorts. Closure.

For those of you fighting your own personal battles, or fighting for a loved one, I hope you can see that light at the end of the tunnel. And I hope you realize that it’s okay to falter, to put your dreams on hold during a trying time. It doesn’t mean you’re a failure. It means, quite simply, that you’re human. And when your battle is over, that dream you once had will still be there waiting for you. And when the dream is finally realized, the victory will be even sweeter than it would have been. Because you’ve grown, you’ve learned, and you’ve earned this victory. So enjoy it. I know I will.


To celebrate both my husband’s victory, and the release of FINAL EXIT, I’m giving away a signed copy of the first two books in this series—EXIT STRATEGY and NO EXIT—to a random commenter on this post. I hope you enjoy them. 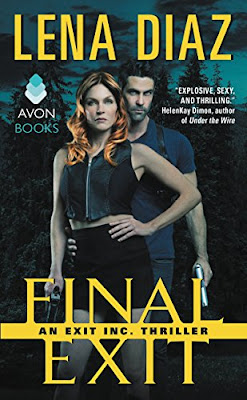 
In the thrilling conclusion to Lena Diaz’s EXIT Inc. series, former enemies become unlikely allies--and lovers--as the war between rival agencies culminates in a battle that eclipses everything that came before it.

The new leader of EXIT Inc.’s ruling Council, Kade Quinn, is tasked with dismantling the clandestine side of the company. But when the enforcers he’s supposed to rehabilitate start disappearing, he discovers that the government they once protected has marked all of the former operatives for execution--including Kade.

When enforcer Bailey Stark finds herself fighting for her life against the company she works for, the last person she expects to help her is their leader--Kade. She soon finds that Kade’s passion for justice rivals her own. But can she trust the smoldering heat that flares between them? Or is he trying to capture her heart just so he can destroy her?

Author Bio:
Originally from Kentucky, romantic suspense author Lena Diaz also lived in California and Louisiana before settling in northeast Florida with her husband, two children, and a Shetland Sheepdog named Sparky. A former Romance Writers of America Golden Heart® finalist, she's won the prestigious Daphne du Maurier award for excellence in mystery and suspense (three times!), has won the Bookseller's Best Award, and has been a finalist in the National Excellence in Romance Fiction Awards (twice). She loves to watch action movies, garden, and hike in the beautiful Tennessee Smoky Mountains. For more information and updates on newest releases visit her website at www.LenaDiaz.com or sign up for her newsletter by pasting this URL into your browser: http://lenadiaz.com/contact.html#newsletter.

Giveaway ends 11:59pm EST Jan. 31st. Please supply your email in the post. You may use spaces or full text for security. (ex. jsmith at gmail dot com) If you do not wish to supply your email, or have trouble posting, please email maureen@justromanticsuspense.com with a subject title of JRS GIVEAWAY to be entered in the current giveaway.
Posted by Maureen A. Miller at 12:30:00 AM