What would you do if someone you loved disappeared, leaving behind a cryptic note foretelling her own death?  If the investigation stalled out and the police had too many suspects, and too little evidence? 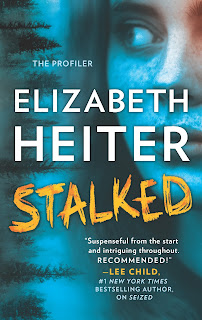 If you’re Linda Varner, the mother of missing teenager Haley Cooke in my upcoming novel STALKED, this is what you do:

1.     Quit your job and take to the airwaves: Almost immediately after her daughter goes missing from inside her high school, Linda quits her job in order to spend all her time looking for Haley.  It becomes her full-time priority to get attention for Haley’s case, because she’s sure the more attention her daughter is getting, the harder the police will look for her.

2.     Plead with anyone who might listen: Every day, Linda leaves two messages on social media: one to anyone who might have information about her daughter, asking them to come forward.  The other directly to Haley, letting her daughter know she’ll never give up, never stop searching.

3.     Make sure you get the bigger spotlight: Linda’s ex-husband is claiming Haley just ran away, telling police not to bother looking for her.  It was an ugly divorce and Linda isn’t sure if her ex just wants to punish her or if he had something to do with Haley’s disappearance.  Either way, she’s making sure she gets more news coverage, so everyone will keep looking.

4.     Visit the detective in charge of the case every day: It doesn’t matter how many times Detective Lopez tells her that she’ll call if there’s an update, Linda goes to the station every day.  She knows that after a month with no new information, her daughter’s disappearance is in danger of becoming a cold case.  So she’s determined to put a face to the victim – and the victim’s family – so often that no one can forget.

5.     Work with a profiler: When the police call in FBI agent Evelyn Baine to profile all the people in Haley’s life who might have had motive to make her disappear, Linda will cooperate however she can.  But when Evelyn’s help in the investigation leads to the possibility that Haley really did run away – or that danger could be closer than either of them expected – Linda tries to take matters into her own hands…

Excerpt from STALKED:
A popular girl goes missing, and everyone close to her has something to hide.
Go inside the mind of a criminal in the fourth book in the riveting The Profiler series:
STALKED by Elizabeth Heiter.

“Where are you, Haley?” Linda whispered into the stillness of her daughter’s room.

Today marked exactly a month since her daughter had gone missing. Since Haley’s boyfriend Jordan had dropped her off at school for cheerleading practice. Since her best friend Marissa had waved to her from the field on that unusually warm day, watched her walk into the school, presumably to change before joining Marissa at practice.
She’d never walked out again.

How did a teenage girl go missing from inside her high school? No one could answer that for Linda. As time went by, they seemed to have fewer answers and more questions.
But Linda knew—with some deep part of her she could only explain as mother’s intuition—that Haley was out there somewhere. Not buried in an unmarked grave, as she’d overheard two cops speculating when day after day passed with no more clues. Haley was still alive, and just waiting for someone to bring her home.

Linda clutched Haley’s bright pink sweatshirt tighter. She fell against the bed, trying to hold her sobs in, and the mattress slid away from her, away from the box spring.

Linda froze as the edge of a tiny black notebook caught her attention.

The book was jammed between the box spring and the bedframe. The police must have missed it, because she’d seen them peer underneath Haley’s mattress when they’d looked through the room, assessing her daughter’s things so matter-of-factly.

Linda’s pulse skyrocketed as she yanked it out. She didn’t recognize the notebook, but when she opened the cover, there was no mistaking her daughter’s girly handwriting. And the words…

She dropped the notebook, practically flung it away from her in her desire to get rid of it, to un-see it. She didn’t realize she’d started screaming until her husband ran into the room and wrapped his arms around her.

“What? What is it?” he kept asking, but all she could do was sob and point a shaking hand at the notebook, lying open to the first page, and Haley’s distinctive scrawl: 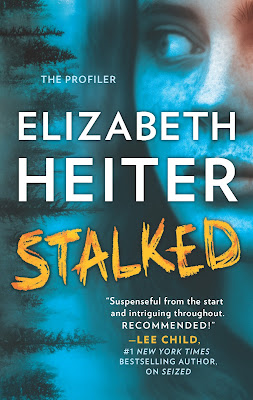 That’s the note seventeen-year-old Haley Cooke leaves behind when she disappears from inside her high school. FBI profiler Evelyn Baine is called in to figure out who had reason to hurt her. On the surface, the popular cheerleader has no enemies, but as Evelyn digs deeper, she discovers that everyone close to Haley has something to hide. Everyone from estranged parents to an older boyfriend with questionable connections to a best friend who envies Haley’s life.

Secrets can be deadly…

One of those secrets may have gotten Haley killed. If she’s still alive, Evelyn knows that the more the investigation ramps up, the more pressure they could be putting on her kidnapper to make her disappear for good. It’s also possible that Haley isn’t in danger at all, but has skillfully manipulated everyone and staged her own disappearance. Only one thing is certain: uncovering Haley’s fate could be dangerous—even deadly—to Evelyn herself.

Giveaway:
Elizabeth will be giving away a copy of STALKED to one lucky person leaving a comment or email entry.

Giveaway ends 11:59pm EST Jan 8th. Please supply your email in the post. You may use spaces or full text for security. (ex. jsmith at gmail dot com) If you do not wish to supply your email, or have trouble posting, please email maureen@justromanticsuspense.com with a subject title of JRS GIVEAWAY to be entered in the current giveaway.
Posted by Maureen A. Miller at 12:30:00 AM