Congratulations to "Linda H.", the winner in Janie's giveaway. Thank you to all who participated! 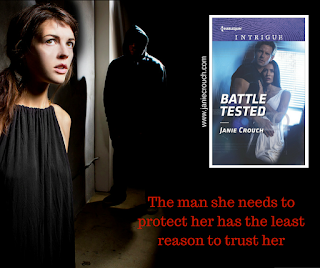 I’m so excited that BATTLE TESTED, a standalone novel part of the Omega Sector: Critical Response series, is now available. This is my favorite story of the entire series for a lot of reasons. One, for the first time in my career, I’ve written a secret baby plot.

It’s not a secret for long, mind you, since Rosalyn, the heroine, has a deranged stalker after her. She needs Steve Drackett’s help. But he’s still a little miffed about how she snuck out in the middle of the night with all his cash six months ago when they met while he was on vacation.  He doesn’t want to be a fool a second time.

Speaking of Steve Drackett, he’s the other reason I like this story so much. An older, widower hero.

What??? A romantic suspense hero NOT in his 20s? Who doesn’t rush into a dangerous situation SHIRTLESS with guns (literal and figurative) blazing as so many book covers today seem to suggest?

No. He’s a hero in his 40s –secure, intelligent, sexy—the best type. He has the guns to run shirtless into any situation, but doesn’t have to show off.

Steve is the director of the Critical Response Division of Omega Sector, and is used to being in charge.  Once he realizes the danger the woman carrying his unborn child is in, he’ll do whatever it takes to keep her safe. Even if he’s not sure he can trust her.

I hope you’ll give BATTLE TESTED a try. I don’t think you’ll be disappointed.

EXCERPT:
Here’s an excerpt from when Steve and Rosalyn meet for the first time. He rescues her from some overly-persistent suitors in a tiki-bar while he’s on vacation in Florida. Totally unaware of the danger that has driven her to the brink of breakdown.

He heard her soft voice as the black-haired beauty’s hand touched his arm. Steve stopped and turned toward her.

He smiled. It felt a little unpracticed. “I don’t think they meant any harm, but it was no problem.”

“There was a time I would’ve let them both have it, but I just don’t seem to have it in me lately.” She looked a little surprised that she was even talking to him.

She was skittish, scared. She’d been that way since the moment she’d walked in. It made him want to wrap an arm around her, pull her close and tell her to take a breath. He’d protect her from whatever demons she was trying to fight.

It surprised him a little that he felt that way. His entire life had been spent helping people, first as an FBI agent, then as he was recruited into Omega Sector. But usually he was more at a distance, less personal. He already felt personal with this woman and he didn’t even know her name.

“I’m sure you could’ve handled them. I just was doing my fatherly duty.”

She snorted and humor lit her blue eyes. “Father, my ass. You’re what? Thirty-nine? Forty?”

Her smile was breathtaking. Steve couldn’t stop himself from taking a step toward her. “I’m Steve Drackett.”

She shook his outstretched hand. He knew the thought that a flash of heat hit them both as their skin touched was both melodramatic and sentimental. Steve was neither of those things.

But he still felt the heat.

No last name. He didn’t press. It was just another sign she was trouble, but Steve somehow couldn’t bring himself to care.

“Can an old man buy you a drink or something?”

She studied him hard as they finally released hands. They were halfway between the bar and the door. He honestly wasn’t sure which way she’d choose. To stay with him or to leave.

She ended up choosing both.

“May I ask you something?” She slid her tote more fully onto her shoulder. She had to step a little closer so they could hear each other over the noise in the bar. He found himself thankful for the chaos around them.

“Are you some sort of psycho? A killer or deranged stalker or both?”

She asked the question so seriously Steve couldn’t help but laugh. “Nope. Scout’s honor.” He held up his hand in what he was sure was an incorrect Scout salute. “I’m an upstanding member of society. Although you know if I was a crazy killer, I probably wouldn’t answer that question honestly.”

She shrugged, her eyes back to being haunted. “I know. I guess I just wanted you to tell me so I could see if I would believe you.”

She smiled so sadly it damn near broke his heart. “I think so. Or maybe I just don’t care anymore. And to answer your question, yes, you can buy me a drink. But let’s get out of here.”

GIVEAWAY
Janie is giving away reader’s choice of any of my Omega Sector: Critical Response books (USA: print or ebook. All other countries: Ebook only). Comment below with a NEW YEAR’S RESOLUTION/COMMITMENT to be entered to win. 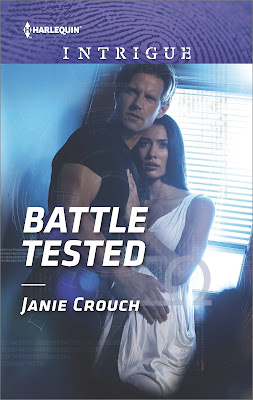 Six months ago Omega Critical Response director Steve Drackett had taken his first real vacation in almost ten years. Beach, flip-flops, relaxing… all uncharacteristic for the man who runs one of the most prestigious law enforcement agencies in the country. So was his one-night-stand with Rosalyn Mellinger, a quiet beauty he met at a bar. Two days later when she left without a word –and all the money in his wallet—Steve knew he should’ve known better.

When a picture of a deceased Jane Doe comes across his desk –a murder victims, Steve realizes it’s Rosalyn, the woman he’s hasn’t been able to get out of his mind for six months. He decides to travel back to Florida to identify the body and assist with the case.

But once there, he finds Rosalyn very much alive. Distraught over her twin sister’s death, and terrified because a psychotic killer has decided to make hunting her his newest game, Rosalyn doesn’t know where to run or who to trust.

Giveaway ends 11:59pm EST Jan 2nd. Please supply your email in the post. You may use spaces or full text for security. (ex. jsmith at gmail dot com) If you do not wish to supply your email, or have trouble posting, please email maureen@justromanticsuspense.com with a subject title of JRS GIVEAWAY to be entered in the current giveaway.