Congratulations to "Mandy B.", the winner in Austin's giveaway. Thank you to all who participated!

When I started out writing—oh, back in the stone ages of the 1990’s—I was hooked on westerns. (I will not reveal just how old I actually was at the time.) I loved cowboys, ranchers, Old West gunfighters, but the best parts of those books I chose were the strong female characters. Some of my favorite books the heroine was the lead and she called the shots, sometimes taking the shots, too. I started dabbling in writing my own westerns, and of course, a woman led the way. In fact, I’m rereading some westerns that had women as gunfighters, avenging the deaths of a loved one. I forgot how much I loved westerns, and realized now why I saved those books.

Fast track to my first published book, and the strong female character from The Degrees of Darkness, who wasn’t about to let no man treat her like a damsel in distress, even if he could sweet talk the wings off a butterfly. Cody Lewis was all cowgirl and had the backbone of many of her Western ancestors, but she was still, at her core, a woman. Her series wrapped and I moved on. 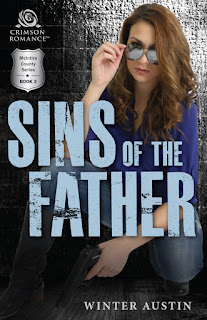 Enter the women of McIntire County. And a niche was started—for me. When one hears alpha, we tend to think more toward the males, but females can be alphas. The Rivers sisters, of Atonement and Born to Die were raised by a Marine general, so they came by their tough demeanor and strong will naturally. In a lot of cases, you could say, that Nic and Cassy tend to circle each other in terms of territory, but blood is thicker in this case.

So when I began writing Sins of the Father, I knew newly minted deputy Jolie Murdoch had to be different than her predecessors. She’s not all wibbly-wobbly, she is the daughter of the former sheriff, but she took a beating in Born to Die, and her confidence took a huge hit. She’s got a softer edge than Nic, and is more of a wide-eye dreamer than Cassy. As Jolie gets tangled up with the hero, Xavier Hartman, she begins to find that confidence she lacked as he schools her on the ways to assert herself, and defend herself. By book’s end, the Jolie we met at the start of the book is gone, and in her place is a character that fits the role of Alpha female.

Winter will be giving away 1 digital copy of her latest novel, Sins of the Father.

What had happened? Why was Xavier covered in blood and looming over a dead man? Why was Clint Kruger dead? Where was Clint’s daughter, Sarah? And was that a prosthetic in Xavier’s lap?
The unholy smell of decay hanging in the hot June air, making Jolie want to hurl her lunch, wasn’t helping her predicament.

Wait! He was missing a limb? Her stomach twisted in knots, sending a sour taste into her mouth. Oh, this was so wrong, on so many levels.

“Deputy, this … ” His raised, tattooed arms flopped down. “This looks exactly like you think it does.”
“What in God’s name happened?” she demanded.
“I don’t know.”
“What do you mean you don’t know? Clint Kruger is dead.”
“That’s who this is?” Xavier groaned, shaking his head back and forth, muttering, “No, no, no, no.”
Eyelids fluttering in rapid succession, and like a fish, her mouth open and closed. Had he seriously …? How could he not know who Clint Kruger was? Wasn’t Xavier one of many who knew that Sarah was missing and possibly with her estranged father? The news had been all over town for the last twenty-four hours, pictures of the two strung everywhere Sarah’s mother could post them.
“Xavier ... ” Jolie approached him cautiously, that nagging voice in the back of her head telling her to draw her weapon, but she ushered the thought away. “If it was self-defense, I’ll understand, but how do you not know what happened?”
Tortured green-gray eyes stared back at her. “I can’t explain it.” The accent he’d done so well hiding leached into his voice in that statement.

She broke out in a sweat. Whoa, baby, she was in it deep. What was she going to do? This was like Ian all over again. She couldn’t screw this up, not like last time. She was a full-fledged deputy now; all eyes were on her, expecting her to botch another case, smearing the good name of Murdoch through the proverbial crap even more than Ian had.

Her radio squawked. “Murdoch, status?” It was Jennings, the currently acting dispatcher.

Xavier’s gaze bore into her as they stared at each other. Could she claim he was a killer, when, in fact, she hadn’t seen him actually kill Clint Kruger? But the evidence before her was damning, and the blood that splattered Xavier’s clothing certainly made him look suspicious.

Don’t do something stupid, Jolie.

What should she do?

Sighing, Xavier positioned the prosthetic under his stump and put it on. “You do what you have to do, Deputy,” he said. Then, with an ease that surprised her, he hauled himself upright.

“You could leave. I could pretend I never saw you.” And that right there was how you screwed it all up. 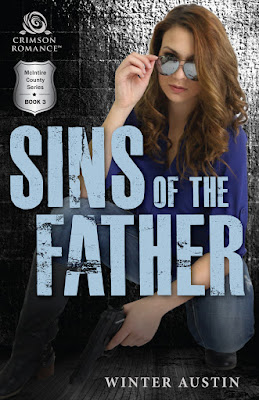 SINS OF THE FATHER

Newly pinned deputy Jolie Murdoch’s first big job as a McIntire County deputy is to locate a missing girl. What Jolie doesn’t expect is to stumble upon a corpse—the girl’s father—with a prime suspect still hanging around. But why would local bartender Xavier Hartmann go off the deep end and bludgeon a man to death?
A former marine, Xavier is barely coping with a traumatic brain injury, and he has no memory of what happened at the crime scene. He came to Eider to confront his past, not get embroiled in a murder as the number one suspect. To make matters worse, as the mystery deepens, Xavier finds himself drawn to the reluctant deputy.
As Jolie fights against mounting pressure to get to the truth, she realizes there’s more to Xavier than meets the eye. But someone is lingering on the fringes, determined to put a stop to her investigation and Xavier’s freedom. Will Jolie do her sworn duty or buck the status quo to give her and Xavier’s newfound passion a chance?

Winter Austin perpetually answers the question “were you born in the winter?” with a flat “nope.” Living in the middle of Nowheresville, Iowa, with her husband, four teenagers, and two crazy dogs, Winter is trying to juggle a career while writing deadly romantic thrillers.

Giveaway ends 11:59pm EST Dec. 23rd. Please supply your email in the post. You may use spaces or full text for security. (ex. jsmith at gmail dot com) If you do not wish to supply your email, or have trouble posting, please email maureen@justromanticsuspense.com with a subject title of JRS GIVEAWAY to be entered in the current giveaway.
Posted by Maureen A. Miller at 12:30:00 AM