Congratulations to "Jonetta", the winner in Dee's giveaway. Thank you to all who participated! 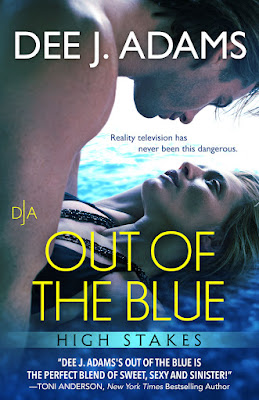 Happy Holidays! I don’t know about you, but I’m looking forward to 2017. Honestly, 2016 started rough and just got rougher by the day, so I was happy to release Out of the Blue before the year’s end.

Who here likes reality television? I have to confess, I’m not a huge fan. Although I’m more drawn to the talent type shows like The Voice or even Dancing With The Stars, I don’t even watch those that often. But I have a ton of friends who LOVE reality television. They live for it.

I’ll tell you a little known fact. I actually worked on the very early episodes of Big Brother. (I stood-in on the show.) The first “contest” in Out of the Blue (when the characters compete for a big prize) is straight from my time on that show. Without giving away any spoilers, I can tell you that the only difference between what I went through and what I wrote was the size of the prize.

Basically, the producers tested every game with a group of stand-ins to make sure everything played out fairly. It gave the host a chance to rehearse possible scenarios and give the camera operators a chance to find everyone participating so that when the real thing happened the crew was as prepared as possible.

Let me know if you’re a reality show watcher and what’s your favorite? The home improvement shows, the cooking shows or the talent shows? Or maybe you’re into the Kardashians or one of the many Housewives shows. What’s your guilty pleasure?

Comment for a chance to win a digital copy of the first book in the High Stakes series, Against The Wall.

I thought you might enjoy a little excerpt, so here’s Brendan and Casey in one my favorite scenes.

Something squeaked overhead and Brendan glanced up at the lights. The whole rack swayed gently, but Brendan didn’t see anyone overhead. Not that he usually did, but clearly guys had to work on the lighting and they probably did it when the group was in the yard, playing one of the stupid games the show rigged up to keep everyone competing against each other. Brendan also decided those stupid games took them away from their composing and created more stress and panic.
Yeah, because that made for good television.
Miles sat down next to the cameraman. He looked his normal Hollywood cool in an ice blue button-up shirt and navy slacks. “Okay, let’s get started.” He motioned to the cameraman and the red light flashed on.
Something dropped behind Casey’s seat, but Brendan only saw it peripherally since he had his eyes on Miles. Whatever it was didn’t make a sound as it landed on the area rug beneath them. For a second, Brendan wondered if he had some kind of floater in his eye and nothing had dropped at all. But then he heard another noise above and watched the lighting rig shake again. Earthquake? He waited for the usual vibration under his feet or the walls to shake, but neither one of those things happened. A nasty smell of fumes—something burning—hit his nose and everyone seemed to notice it as they looked around.
“How about we move out from under the lights for a second?” Brendan said getting to his feet. A flash and crack happened over their heads and everyone jumped and ducked simultaneously. Another high pitched squeak rent the air and something else dropped behind Casey as she got to her feet. Brendan didn’t wait for her to move. He dove, tackling and rolling, protecting her head with his hand and tucking her close as a crash sounded exactly where she’d been seated.
Glass from the light shattered and covered the chair and carpet. A small fire exploded on the ground, sending foul smelling fumes into the set.

(Side note - I can tell you from experience that it’s scary as hell when a light falls from overhead. And yes, I’ve been there when it’s happened. Fire and all!) 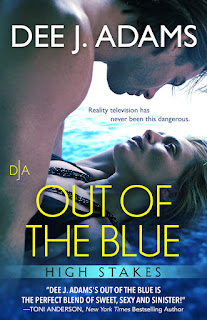 OUT OF THE BLUE

Reality television has never been this dangerous.

Recently dumped by her fiancé, Casey Turner is going for her dream career. Rebound sex with a hot stranger was eye opening, but she wants to leave her mark on the world. She’s sure that winning the new reality show Write Your Ticket will prove that she’s got what it takes to make it in the music industry. She never expects to be the target of a killer who’ll stop at nothing to see her die, even if it’s on national television.

Brendan St. John didn’t think he’d ever see the girl who disappeared after a sizzling one-night stand, but he won’t let her distract him from winning the reality show that could change his life. Of course, it’d be easier to ignore her if he didn’t have to keep saving her from disasters. But too many accidents on the set can’t be coincidence, and when Brendan interferes, Casey isn’t the only one in danger.


Despite being pitted against each other, Casey and Brendan grow closer, and the attraction that brought them together burns hotter with every look. Ultimately, only one of them can win the show, but that doesn’t stop either from being the target of someone with a mighty grudge.

Giveaway ends 11:59pm EST Dec. 20th. Please supply your email in the post. You may use spaces or full text for security. (ex. jsmith at gmail dot com) If you do not wish to supply your email, or have trouble posting, please email maureen@justromanticsuspense.com with a subject title of JRS GIVEAWAY to be entered in the current giveaway.
Posted by Maureen A. Miller at 12:30:00 AM