It Ain’t Easy Being a Fed And Looking Pretty

Congratulations to "JoAn V.", the winner in Tee's giveaway. Thank you to all who participated!

Many fans and readers ask how much of my stories are about my personal experiences as a federal agent. Well folks, the full answer could take a while, but the short answer is: some, but not all.

Some—but not all—of my romantic suspense stories, including my first novel, Burnout, have a female federal agent or cop, and contained within each of them is a small piece of me—including some of the very personal, very frustrating issues I encounter every day on the job as a fed.

First and foremost, have you ever tried hiding a small cannon on a 5’1” frame? I own a lot of very nice, fairly expensive suits purchased at Nordstrom, but as soon as I strap on that gun, handcuffs, extra ammo, pepper spray, baton, tactical flashlight, and cell phone…there goes that trim waistline I worked so hard for at the gym. If that wasn’t difficult enough, working with all those macho guys that head straight for the deli counter at lunch for those carbolicious sandwiches oozing with cheese and mayo—my faves, BTW—doesn’t help, either. And let me be the first to debunk X-Files Dana Scully’s wardrobe. No way is she wearing any real tactical gear, not with that super-snug, body-hugging jacket. It’s a Hollywood illusion, my friends.

Speaking of fashion, sometimes I absolutely crave to wear girl clothes. I’m talking pink, frilly, lacey things, like dresses, skirts, and high heels. But if I wore those things on the job it would cause a controlled riot. Not to mention that it’s been so long since I wore heels I’d probably fall flat on my face.

The hardest part has to be dealing with basic physiological necessities. Working midnight surveillance shifts is the worst. Drinking coffee all night to stay awake is a no-brainer for a guy. When they gotta go, all they do is step outside the vehicle and take care of business. Me, I gotta find a tree or a shrub, a roll of TP, and pray no one’s looking. Been lucky so far.

I’ll try to finish up on a positive note, since I really do love my job. Once I was on a protective service detail in New Jersey, sporting my favorite black Nordstrom suit, a pony tail, and seriously cool shades when a woman comes up to me and says:  I just had to tell you…you look fabulous. Made my day. 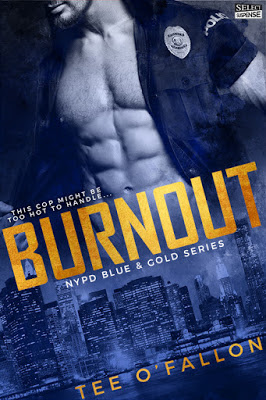 He’s been a cop too long not to recognize the signs of a woman running from her past.

She’s not who she says she is—and isn’t about to share her secrets.

Sexy-as-sin Police Chief Mike Flannery knows the new arrival to Hopewell Springs is trouble. She has a smoking-hot body and a quick wit…and he’ll be damned if that’s not a turn-on. But this former NYPD cop and small-town heartthrob has been burned before, and there’s no way he’ll let that happen again.

New York City Detective Cassie Yates is on the run. A six-month undercover sting in a sleazy bar seemed like a textbook arrest—but now there’s a hit out on her. Armed with fake ID, her K-9 companion, and a police-issued SUV, she flees to a quiet upstate town where she trades her badge and gun for a spatula, finally finding peace in the dream she tossed aside to follow her family into law enforcement.

There’s no denying the fire and ice between them. But as the hired assassin closes in, Mike’s past comes roaring back and secrets are revealed in an explosion destined to tear them apart—if not destroy them.

Cassie felt Mike’s intense blue eyes taking a walk all over her body. “Checking out my ass again, Chief?”
A slow, annoying smirk crept to his mouth, and for a split second Cassie was tempted to smack it off his gorgeous face. “If you don’t want folks checking out your ass, I suggest you not wear hot pink. Tends to attract attention.”
“So that’s the key, wearing boring colors?” Cassie tried another lug nut, and again had no success.
“I don’t think there’s any color you could wear that would make a difference. You’ll attract attention no matter what you’ve got on.”
She glanced at him, again wondering whether that was a compliment or an insult. What she wound up noting most was the effortless ease and competence about him. With his starched navy blue uniform outlining his incredible physique and that gun strapped to his side, he was as intimidating as a cop should be. A poster boy for the NYPD. So how did a guy like him end up in a quiet place like Hopewell Springs? And where did he get that doggone confident sexuality? The man wore it like a second skin.
“You know,” he said, “if you let me help I could save you some time and you wouldn’t risk breaking a nail. I am here to protect and serve.”
Cassie dropped the wrench and it clattered onto the hot road. She choked down the urge to flip Mike off and shoot back, “Yeah, service this.” Instead, she straightened stiffly and answered in a civil tone, “Like I said, no thanks.”
“Suit yourself.” Mike hooked one of his hands on his duty belt and leaned against the Trail Blazer, sporting an irritating, masculine smirk on his way too handsome face.
Cassie snatched up the wrench, fitted it onto the topmost nut, and yanked with all her might. She felt something give.
Finally. Nope. Oh, shit. The nut hadn’t given way.
She had.
Her sweaty hands slipped off the wrench handle, and she felt herself flying backward. When she expected her ass to hit the pavement, a pair of strong arms slid around her bared waist, catching her in mid-air.
Mike turned her in his arms but didn’t release her. She clung to his forearms for balance. When she looked up, their faces were close together and Mike’s warm breath blew across her forehead. Why does the man have to smell so freaking good all the time? Her throat constricted, and she swallowed.
Raven’s nails clicked on the pavement as she bounded to where they stood. Cassie expected the dog to interpret Mike’s nearness as an attack and launch straight at his chest. She didn’t. Her K-9 was merely curious and sat dutifully beside her.
“You okay?” He gave her a look of concern.
The air around them seemed to spark and sizzle. Every place his fingers touched on her bared waist skittered with goose bumps. She’d thought him handsome before, but… Oh, man. He had about as perfectly chiseled a profile as she’d ever seen. All hard, masculine angles, planes, and tantalizing shadows.
“Uh, fine. Good catch, Chief. Thanks.” Her breathy voice didn’t sound like her own, dammit. God only knew how long it had been since she’d reacted to a man this intensely.
Try never.
“My pleasure,” he said, backing away. The suggestive tone of his voice and the hot way he looked at her made her heart dance like sizzling bacon on a hot skillet.
Several young boys on bicycles raced along the road, laughing and waving as they flew by. He smiled and waved in return. It really did seem like every kid in town liked the guy.
Without asking, Mike picked up the lug wrench and with one yank, the nut gave way with an ear-splitting screech. He made embarrassingly quick work of unscrewing the remaining nuts.
The heat rising in her face had nothing to do with the blazing sun. She wasn’t helpless, she was a New York City detective, for Christ’s sake. So it was a little hard getting the lug nuts off. She could change a tire.
Annoyance turned to fascination as a light sheen of sweat covered Mike’s forearms, making them glisten in the blazing sunlight. As he maneuvered the jack beneath the car, the muscles in his arms rippled and bunched, making Cassie want to run her fingertips over the hard ridges. The guy could have been a cover model. On second thought, he was too raw and too much man. Everything tempting and everything she should stay away from. 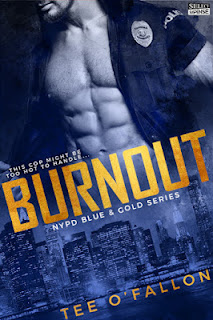 Tee O'Fallon is the author of Burnout and Blood Money, Books 1 and 2 of the NYPD Blue & Gold Series. Tee has been a federal agent for twenty-two years, giving her hands-on experience in the field of law enforcement that she combines with her love of romantic suspense. Tee's job affords her the unique opportunity to work with the heroic and sexy men in law enforcement on a daily basis. For Tee, research is the easy part!

Giveaway:
A free e-copy of Burnout to one lucky winner chosen at random from the comments and email entries.
Posted by Maureen A. Miller at 12:30:00 AM