With: The Black Rose 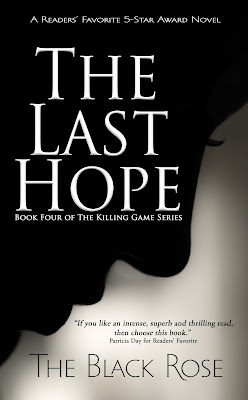 After her disappearance, Allina, the wife of FBI Special Agent Ives Andrich, wakes up at a secluded mountain estate with Ives nowhere in sight. Not knowing where she is or how she got there, she learns more about the people surrounding her. Her realization is worse than she imagined--she is in the clutches of the secret German organization she had been warned about.

In her heart, she denies their explanation that Ives is missing and presumed dead. After a failed escape attempt, one thought keeps her going--her love for Ives and their undying romance she refuses to give up on. However, the game is about to change in ways she could not have anticipated in The Last Hope, Book Four of The Killing Game Series, a romantic suspense thriller series by The Black Rose.
"Full of suspense, mystery and true undying love, this is one story that wouldn't let go."
-- Anne-Marie Reynolds for Readers' Favorite

"A maelstrom of suspense and unremitting tension."
-- Marian for FirstEditing

"The fun here is in what the author deliberately hides."
-- Benjamin Ookami for Readers' Favorite

About the Author:
The Black Rose is an author, photographer, and filmmaker. Born in Chicago, she currently resides in New York with the love her life, her Hokkaido Dog, Kuma. She began writing at the age of seven and dabbled until she woke up one day and simply had to write a novel. She has several 5-Star reviewed novels, both part of individual series.

She categorizes her novels very directly; “My writing is deeply rooted interpersonal relationships: people’s feelings, thoughts, emotions, and the intimacies between two people that truly love each other despite the circumstances surrounding them.” Her genres are suspense, thrillers, crime, romance, and espionage. As she says, “I write about love, honor, and doing the right thing, even when it seems disadvantageous, even when it’s not the popular path to take.” She sees her writing as a gift from God, and appreciates and learns from her stories.

Her writing passion stems from her immense love for art, which began with drawing at age five and moved into oil painting by age eight. Her love and study of photography soon became a professional passion, and she spends hours photographing and laying out her book covers. Readers can visit “Privé with The Black Rose” showcasing behind-the-scenes insights into her writing, novels, characters, photography, and films. She films and produces her book trailers and, in the future, plans to make short films.

Email ThisBlogThis!Share to TwitterShare to FacebookShare to Pinterest
Labels: The Black Rose