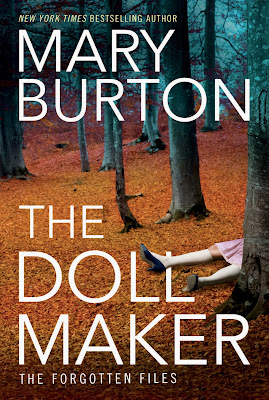 Dr. Tessa McGowan had never seen anything quite like it. But the mutilated bodies on her exam table tell a stunningly macabre tale: someone with a twisted mind is kidnapping women and altering their faces to resemble real, life-size dolls. As a forensic pathologist, it’s her job to aid the agent leading the case—even if that agent is her estranged husband.

Twelve years ago an unspeakable tragedy destroyed Dakota Sharp’s world. Haunted by the ghosts of his past, he’s devoted himself to capturing killers. His only regret is that it cost him Tessa. Now, as the Dollmaker case brings them together—and raises his suspicions that he’s crossed paths with this deranged psychopath before—they may just have their second chance. But it seems Dakota’s not the only one who wants to make Tessa his own…

She may be the Dollmaker’s next target, but Tessa has no intention of winding up as another toy on his shelf. Can she and Dakota stop this ghastly killer before his next deadly playdate?

She smiled. “Just the man I need to see. I have information for you.”

Dakota stepped aside. “Come in.”

Closing the door behind her, he felt a familiar tightening in his gut when he watched her walk. Damn. When would he get over wanting her? She moved into the living room, and he motioned for Tessa to sit. She chose the sofa.

He remained standing. “What do you have?”

She scooted to the edge of the couch, clutching a file in her hands. “I pulled Kara’s autopsy file.”

His insides turned brittle. “Why’d you do that?”

“About the makeup?” A calm tone hid the fire burning in his gut. “The Kara I knew didn’t wear makeup.”

“She wasn’t wearing it that night. The picture proved it. I know my cousin remembers everything, but I thought she might have heard wrong. So I pulled Kara’s medical examiner case files and looked at the pictures taken of her when she arrived at the medical examiner’s office. Have you seen them?”

He paused to shore up his defenses. “No.”

“I know this is painful, Dakota, which is why I did the looking without talking to you first.”

He cleared his throat. “What did you find?”

“The photos show remnants of heavy makeup. The remaining coloring reminds me of a doll. Pale skin, red lips. The pictures prove Kara didn’t wear any makeup to the party. The fact that makeup was on her face makes no sense. Especially considering she’d been missing five days.”

Puzzle pieces snapped into place. “Someone else applied it.”

“That’s what I think.” Her fingers gripped the edges of the file tighter. “I think someone kept her drugged and sedated her like Diane.”

“The killer wasn’t planning to take her,” he said, letting the theory take shape. “He used what he had at the time. Barbiturates and face paint. And he overdosed either by accident or intentionally.” The end result was the same. His sister was dead.

She opened the file and rustled through the papers. “I also discovered the medical examiner found DNA on her. At the time, it didn’t match anyone in the system, but that was twelve years ago. The science is more refined now. Long story short, I’ve requested retesting, and I’ve also asked the DNA be cross-checked against the DNA found on Diane Richardson and Terrance Dillon.”

Sharp rose and paced the room. He stared at her, not trusting himself to speak. Answers dangled just out of reach.

“Madison dated Kara, Diane, and you.”

“He did not date me. I kind of had a crush on him, and he came by to see me several times after my accident. It was never romantic.”

“For you. You can’t speak to what he was thinking.”

“He never gave me any indication he was interested.”

“It’s a connection to all three of you. And until he’s found, I don’t want you going anywhere alone.”

“Anywhere? That’s kind of ridiculous. I mean, this is Stanford. The guy played cards and watched old movies with me while I was in a leg cast.”

“I don’t care if he read bedtime stories to you every night. He knew all three victims, has professional artistic skill, and now has dumped all his work in the trash and vanished. We have no samples of his DNA yet, and until we do and can prove his innocence, you need to be on high alert.”

He captured her wrist with his hand. “You did a great job, Tessa. I listened to every word you said. Now it’s time for you to listen and let me do my job.”

She looked at his hand on her wrist. Laying her hand over his, she pulled his fingers free and took his other hand in hers. Her touch was warm. Soft. Somewhere inside him, he felt locks tumble free and a door open. Emotions raced toward the light.

“I’m going to solve this.” His voice sounded distant, hoarse.

“And then what?” she challenged.

“Don’t play dumb. After this case, we figure us out.”

How could he make a promise to her he didn’t know he could keep? He was far from perfect, but he’d never lied to her. “None of our problems will be fixed by solving this case.”

“I don’t believe that. Kara’s case is the root of it all.”

He tried to pull free of her touch, but her fingers tightened around him. How much of the past would have to be exorcised for them to now have a chance?

“Despite all our differences, I know you’re good at what you do. Without you, a lot of evil would be walking free.”

He looked at her long finger with its neat, trimmed nail circling the scar. She’d been so young when they first met, but each time he saw her he was more drawn to her. He’d never made a single pass at her. And later, after they were married and mired in turmoil, when she told him she had to leave, he’d again taken that dammed high road. Didn’t fight. Didn’t argue. Accepting. Alone.

At this moment, he was tired of walking the same lonely, shitty road. Righteousness didn’t welcome him home at night or warm his bed.

He wanted her. Wanted to feel like she once made him feel. Whole.

Moving his hand over hers, he wrapped his fingers around hers, savoring the warmth. He waited for her to pull free, for any sign she didn’t want his touch. She didn’t move. Didn’t breathe. She simply stared into his eyes.

Sharp leaned his head forward and kissed her softly on the lips.

New York Times and USA Today bestselling novelist Mary Burton is the highly praised author of twenty-eight published romance and suspense novels and five novellas. She lives in Virginia with her husband and three miniature dachshunds.