It’s that time of the year—time to bake all those holiday favorites, pumpkin cookies, apple pies and the like. I love this time of year! And as I’ve said in past posts—we authors have our characters do things that we do not. So…do you bake with your significant other? I don’t. My husband hangs around while I bake, and then he likes to reap the benefits—you know, eat the cookies just out of the oven, lick the beaters—that sort of thing.

Most recently, I received a post on my FB page from a reader who thanked me for the recipe that I published in book #3 of the First Force Series, Into the Dark. She told me that the apple pie recipe made with golden patty-pan squash was just as succulent as Jack promised Rayne it would be, and as I promised at the end of the book. And of course she mentioned that the entire time she was preparing and baking the pie she couldn’t help but think of Jack Haliday and Dr. Rayne Lee and how they prepped and baked the pie in the book. One reviewer posted on Amazon: “You'll never bake an apple pie again without thinking of Jack and Rayne--just sayin'”

Yep, let’s just say the baking scene in Into the Dark is pretty darn hot or is what follows the baking scene that sticks with my First Force readers? I’m not truly certain, but one thing is for sure: I’ve given them food for thought!

I would like to wish you a very happy Thanksgiving—and I hope your baking experience is as passionate as Jack and Rayne’s!

Here’s the baking scene excerpt from Into the Dark, Book #3 First Force Series:

He wiggled his finger at her to come closer. Rayne pushed off the stool to stand next to him, but Jack shuffled her to stand in front of him to face the counter, while he imprisoned her between his arms. Her tummy tightened. Gently, he used his chin to move her hair away from her ear. He whispered, “Grab some flour with your fingers and smooth it over the roller.”

Trying not to show how fired up she was, she took in a steadying breath, and then reached into the canister on the counter to gather a fistful of flour. Unerringly, she rubbed the flour over the roller.

“Now take a firm hold of the handles…” Rayne complied. Jack placed his hands over hers. “Nice and easy, roll it over the dough, using just enough force to stretch it out.” His hands guided her through the task. “That’s right…now add some flour to the dough to keep it supple…”

She could feel the stiff column of his erection against her buttocks. He adjusted his stance slightly to hide his excitement. Everything feminine in Rayne clenched. With every stroke of the roller, the warmth of his strong hands atop of hers, and his breath feathering her skin was driving her crazy. A heat crept up her spine.

“Looking good. Now lay the crust across the pan,” he instructed. His voice had changed from calm and patient to raspy and husky.

Gingerly, she lifted the crust from the counter and laid it across the pie pan. Leaning into her, Jack reached for the bowl of sliced apples and squash smothered in sugar and cinnamon. He placed the second roll of dough onto the floured space.

“Are you ready to go solo, or do you still need assistance with the roller?”

“Oh, I’m not sure I quite have it yet, and like I said, I wouldn’t want to ruin your work of art.”

“I aim to please,” he whispered. Slowly he ran his hands across her hips, up her ribs, and down her arms until his hands covered hers already grasping the handles of the roller. “Let’s review…forward…then back—”

“Just enough force to stretch it out.”

“Now gently lay it across the pan.”

Together they worked the dough around the rim of the pan to form a curvy crust. Jack said, “Press it together, gently—or not.” He picked up a knife and cut into the top crust. “Now vents to let the steam escape.”

“Are you sure we want that to happen?”

Rayne thought she would burst. Tossing any inhibitions she may have earlier had, she turned around taking his face into her flour-covered hands to pull him into a heated kiss. He swallowed her into his arms, pressing deeper into her lips, savoring the passion.

Rayne inquired, “How long does it have to bake?” 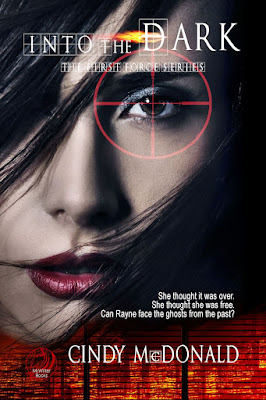 Ghosts from the past are chasing her!

A young girl was calling claiming to be Sierra. The tiny trembling voice claimed that the guerrillas were holding her captive, and there was only way for them to be reunited—Rayne must travel to Peru and give them something that she has. Moreover, the guerrillas have another stipulation—Rayne must come alone.

Author Bio:
For twenty-six years Cindy’s life whirled around a song and a dance. She was a professional dancer/choreographer for most of her adult life and never gave much thought to a writing career until 2005. She often notes: Don’t ask me what happened, but suddenly I felt drawn to my computer to write about things that I have experienced with my husband’s Thoroughbreds and happenings at the racetrack—she muses: they are greatly exaggerated upon of course—I’ve never been murdered. Viola! Cindy’s first book series, Unbridled, was born. Currently there are five books in the series.

Cindy is a huge fan of romantic suspense series’, especially with a military ops theme. Although she isn’t one to make New Year’s resolutions, on New Year’s Day 2013 she made a commitment to write one. At this time, there are four books in her black ops series, First Force: Into the Crossfire, To the Breaking Pointe, Into the Dark., and To the Brink. Book number five Into the Dawn is scheduled to release in September of 2017.

People are always asking Cindy: Do you miss dance? With a bitter sweet smile on her lips she tells them: Sometimes I do. I miss my students. I miss choreographing musicals, but I love writing my books, and I love sharing them with my readers.
Cindy resides on her forty-five acre Thoroughbred farm with her husband, Bill and her Cocker Spaniel, Allister near Pittsburgh, Pennsylvania.