I just love romantic suspense and everything it entails! And I love the characters in One Wrong Move, Camden Alexander and Rayma O’Riley. Writers aren’t supposed to have favorite characters, are they? But these two definitely top my list. 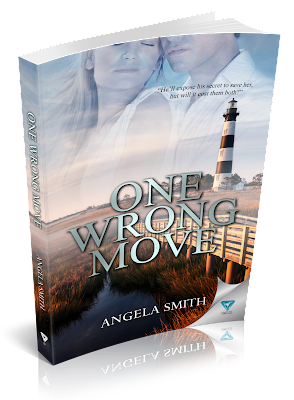 Rayma used to be an investigative reporter until she moved to the Texas Gulf Coast and became an anchorwoman, reading prompts on a screen that highlight the day’s news. She’s a bit bored, but that doesn’t stop her from going after her own stories in her own time for her new blog. She loves it too much to give it up, and when she learns of a successful restaurant creating designer drugs and her news team isn’t interested in pursuing a story, she decides to do her own investigation.

When she meets Camden at the restaurant, she believes he’s a chef, and probably involved in the drug business, too. She decides to use him for information, but quickly learns—when he breaks in her home to save her life—that he’s a DEA agent who has been deep undercover for almost a year. He’s trying to bust Darrell Weberley, the owner of the restaurant. Darrell, AKA Dare isn’t one to play around with, and is suspected of killing several, including another DEA agent who was Camden’s friend.

Sparks fly, of course, and danger ensues. It’s one of those love/hate relationships at first when he takes her to a safe house. She accuses him of being just as bad as the drug lords and as being just as involved. And as a DEA agent, the last thing Camden should do in his career is fall for a witness!

Rayma was first featured as secondary character in One Last Hold, where she was the heroine’s best friend and got involved in another bad relationship. You can download One Last Hold for free right now on Kindle or Nook. Rayma was such a strong character, I had to cut a lot of her scenes from One Last Hold to keep her from overtaking that story. She definitely deserved a book of her own, and I don’t think I made a wrong move with this one!

Thanks for stopping by today. One Wrong Move is available now on Kindle!


AMAZON
About the Author:


Angela Smith has always had her nose stuck in a book, so much so that she was dubbed most likely to write a novel during Senior Year. Although high school was decades ago, her dream first began when her mom read ‘Brer Rabbit’ to her and her sister so often they could recite it back to each other before ever learning to read. She then told her mother she’d write a story one day, and now hasn’t been able to write one yet where falling in love doesn’t come into play. Although life in general keeps her very busy, her passion for getting those stories out of her head tends to make her restless if she isn’t following what some people call her destiny.