With: Caila Jaynes and Allyson Simonian

Congratulations to "Mandy", the winner in Caila and Allyson's giveaway. Thank you to all who participated!

Thank you so much, Maureen, for having us.  We’re excited to be in such amazing company!

From the description below, readers might wonder whether Meeting Danger is more about a motorcycle club or a governmental agency. The answer is the agency—the Danger Series focuses on a federal task force called Phoenix, the assignments its team members are pursuing, and the women they meet along the way.

We like to write about what we enjoy reading ourselves, and motorcycle clubs are hot! In Book One, our hero, Camden, is undercover in the Wicked Disciples, an outlaw motorcycle club, when he meets our heroine, Autumn.

Camden is straitlaced, an honest and loyal friend, and a good man in a fight. Even when working in gritty conditions, he’s an agent to the core.  In fact, all the heroes in this series are clean-cut law-enforcement types, but that doesn’t keep them from getting down and dirty when necessary. Although, Grayson, the hero of Book Two, is a bit of a jerk at first blush, but you’ll learn more about him in Meeting Danger. We aren’t ruling out an anti-hero in a future series, though, so stay tuned for that.

Meeting Danger was a 2016 Kindle Scout winner and was selected for publication by Kindle Press. 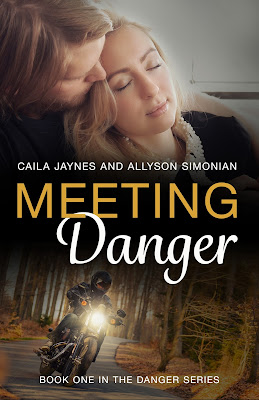 Camden Taylor is a federal agent working undercover in an outlaw motorcycle club, the Wicked Disciples, investigating their heroin operation. When they kidnap a member of another club, Camden has no choice but to blow his cover in order to save the man's life.

Autumn Mason has lived with Butch Cobb, president of the Wicked Disciples, for nearly five years. Butch is terrifying—as abusive as he is powerful—and there is no escaping him. But when Autumn witnesses Camden being beaten and held prisoner, she is forced to make a desperate decision. Will she choose to be loyal, or will she do what she knows is right?

Camden pulled his weapon from his ankle holster and moved out from behind the tree. Aiming his Glock at the dark silhouettes in front of him, he shouted, “Federal agent! Drop your weapons!”

“You’re a cop?” Beck sounded livid as he spoke from several yards away. He pulled a pistol from beneath his cut and aimed it steadily at Camden.

“You don’t want more trouble than you’re already in, Beck. Now, drop it!”

Where are the sirens? He should be hearing them by now. A drop of sweat slid down Camden’s back as the brothers ignored his warning and advanced on him. 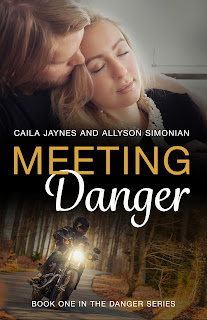 He reached into his jacket pocket with his free hand and again pressed the button on his phone, twice this time to indicate a dire emergency. Too late, he realized that Romeo had doubled around. Camden stumbled forward as he was struck from the side. He clutched at his temple, disoriented for a second as he scrambled to keep from falling.

Romeo came at him again, this time joined by Grizzly, and they took him down to the ground. Yet another piled on top of them. Beck.

Camden’s hand was pinned beneath their weight. With no choice left, he released his hold on his gun.

His heart pounded as he rose. Romeo and Grizzly grasped his arms, holding him tightly as he steeled his expression. “Backup’s on the way.”

Beck didn’t acknowledge the warning as he scooped up Camden’s pistol and stuck it in his own pocket. “Pig! Wait and see what we’re going to do to you.”


We’re so excited to be here, we’d like to give away a $25 Amazon gift card and a free Kindle copy of Meeting Danger to one lucky reader! To enter, see the Rafflecopter giveaway below.