Love Me, Love My Dogs

Congratulations to "Trude V.", t he winner in D.D.'s giveaway. Thank you to all who participated! 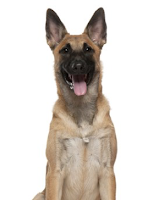 Readers often contact me to talk about dogs in my books and what they’re really like.  Let’s see what they have to say for themselves.

First up: Bogart from IRRESISTIBLE FORCE.

BOGART: Belgian Malinois. Police Patrol K-9, ma’am.  My job is fighting crime one bite at a time.  My partner, Officer Scott Cannon, says I have a nose for trouble.  Just putting it out there, I have a soft spot for the ladies, too.  In IRRESISTIBLE FORCE, it all starts with a dame.  Doesn’t it always? 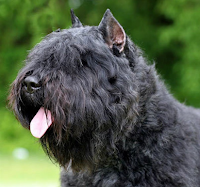 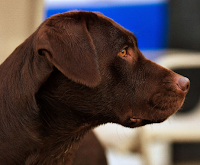 Next up, HUGO and IZZY :  Two K-9s for one story in FORCE OF ATTRACTION

HUGO:  I’m a Bouvier des Flandres.  We aren’t  common as police K-9s in the U.S., but I’m making it happen.  My human partner Officer Cole Jamieson is just as ambitious when we go undercover as a Dog Agility team.  My problem?  Her ex.  This smokin’ hot male is moving in on my pack leader.  He’s going to learn that I act out my feelings.  A shoe, or a wallet, even his cell phone might “accidently” get chewed.  It’s what I do.

D.D.:  As Hugo’s counterpart in the undercover operation, what do you do, Izzy?

IZZY:  I’m a female Chocolate Lab Drug Enforcement Agency K-9.  Able to distinguish between 19,000 smells, I’m always focused and composed.  Hugo’s show-off antics remind me of my partner, ex-bad-boy DEA agent Scott, who I adore.  Uh oh.  Opposites do attract, I guess.  It takes both of us K-9s to solve the double crime in FORCE OF ATTRACTION. Psst, don’t tell him, but Hugo is kinda cute! 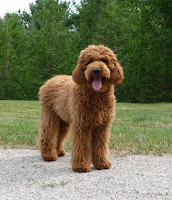 D. D.:  Samantha, you’re a bit of a departure from law enforcement K-9s.

SAMANTHA:  That’s right.  As a Golden Doodle PTSD service K-9, my focus is on monitoring my partner, not the outside world.  Ex-Military Police and disabled vet Lauray “Law” Batisse, isn’t the easiest person to love.  He’s got issues, if you know what I mean.  But I chose him because he needed me.  He smelled so alone.  My trainer, Jori Garrison agrees.  Together we help him regain a sense of his own worth.  He ultimately does, thanks to Jori.  So, of course, I’d go all-out and risk everything to save them.  They’re my pack.

RIVAL FORCES gives us another pair of capable K-9s: Lily and Oleg. 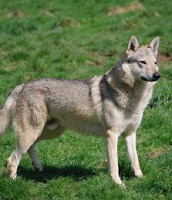 LILY: The full name is Nova Scotia Duck Tolling Retriever.  I’m a trained Search and Rescue K-9.  I like water, snow, beaches, mountains, whatever.  I’m versatile that way.  I’m great at digging out a skier under an avalanche, or a victim in an earthquake.  I’m not brave, okay?  But I have a temper.  If my partner, Search and Rescue leader, Kye McGarren, ignores me, I tend to chew his shorts, literally.  A girl’s gotta do what a girl’s gotta do.

OLEG:  Classified.  Name, rank and serial number, ma’am.  That’s it.  I’m a Czech Wolfdog. Work security detail.  I’m trained to operate alone in scouting out potential danger.  My slanted yellow-eyed stare tends to intimidate people.  I don’t even bark before I attack.  I’m what you call silent deadly force.  But I’m loyal to the person who gains my respect.  For instance, Yardley Summers.  Now there’s a woman!

D. D.: Hey, Harley.  Were you surprised I waited so long to write about a German Shepherd”

HARLEY:  Not at all, D. D.  I figured you were working your way up to writing about the best breed out there.  Woof!  I’m one of the newer professionals, an all-around explosives K-9. We Explosives K-9s work with Homeland Security, as well as police and fire departments.  I’m very good at detecting a fire before it starts.  That’s how I save both my partner, arson detective Noah Glover, and an innocent by-stander, boutique owner Carly Reese.  And that’s just Chapter One! 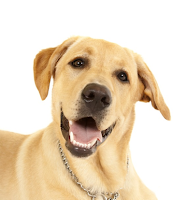 ZANDER:  Hey, what about me!   Yellow Lab Squad K-9 from novella NECESSARY FORCE.  FBI, babe!  Nothing gets past this nose!

And that’s the line-up, so far.  Hope you enjoyed hearing from my K-9 Rescue Series squad.

Giveaway:
D.D. will be giving away a K-9 Christmas Ornament to one lucky person leaving a comment or email entry. 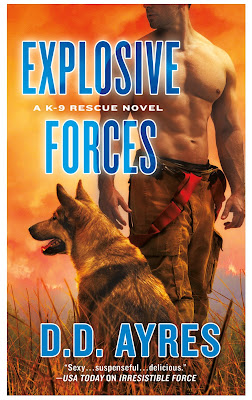 Danger is heating up…
When Carly Reese’s beloved fashion boutique catches fire, she sees her dreams go up in smoke. The good news is that Carly was saved from the flames by a barking dog nearby. She soon discovers the heroic pooch is a trained K-9 who’s guarding his unconscious partner …a gorgeous firefighter who ends up in Carly’s arms.
Noah Glover and his K-9 are a fearless duo, and Noah has clearly met his match with the brave, beautiful Carly. Soon they team up to track down the arsonist behind the blast – a psychotic criminal who’s intent on framing Noah. Meanwhile, the sparks between Noah and and Carly could ignite a five-alarm fire. Should they smother their feelings in the name of justice…or fan the flames of passion? Find out in Explosive Forces!

Giveaway ends 11:59pm EST Nov. 9th. Please supply your email in the post. You may use spaces or full text for security. (ex. jsmith at gmail dot com) If you do not wish to supply your email, or have trouble posting, please email maureen@justromanticsuspense.com with a subject title of JRS GIVEAWAY to be entered in the current giveaway.

Check out the JRS SHOWCASE for more giveaways.