Inspiration From My Favorite Mystery Authors

Collecting quotations has been one of my lifelong hobbies. In the pre-computer days, I would jot down quotations on slips of paper and toss them in a desk drawer. Once a month, I would type them up and place them in a special file folder. I’ve kept the folder but now use Pinterest and Goodreads to store my quotations.
Here are ten inspiring quotations from my favorite mystery authors:
Approach your lives as if they were novels, with their own heroes, villains, red herrings, and triumphs. Mary Higgins Clark

Crime is terribly revealing. Try and vary your methods as you will, your tastes, your habits, your attitude of mind, and your soul is revealed by your actions. Agatha Christie

Do no harm and leave the world a better place than you found it. Patricia Cornwell

Somewhere along the line, I realized that I liked telling stories, and I decided that I would try writing. Ten years later, I finally got a book published. It was hard. I had no skills. I knew nothing about the business of getting published. So I had to keep working at it.
Janet Evanovich

Both back when I was acting and now that I'm writing, I've always wanted the same thing out of my career: to be able to get up in the morning and do what I love doing. Tana French

The English tradition offers the great tapestry novel, where you have the emotional aspect of a detective's personal life, the circumstances of the crime and, most important, the atmosphere of the English countryside that functions as another character. Elizabeth George

I don't want to write formula. I don't want to crank these books out like sausages. Every book is different, which takes a hell of a lot of ingenuity on my part. Sue Grafton

I had to learn compassion. Had to learn what it felt like to hate, and to forgive and to love and be loved. And to lose people close to me. Had to feel deep loneliness and sorrow. And then I could write. Louise Penny

You don't find time to write. You make time. It's my job. Nora Roberts

What I'm doing is writing stories about women who care about justice. They are women who think about the difference between right and wrong, what's legal and illegal, ethical and unethical, moral and immoral. Lisa Scottoline 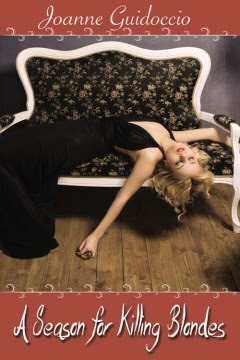 A SEASON FOR KILLING BLONDES

Hours before the opening of her career counseling practice, Gilda Greco discovers the dead body of golden girl Carrie Ann Godfrey, neatly arranged in the dumpster outside her office. Gilda’s life and budding career are stalled as Detective Carlo Fantin, her former high school crush, conducts the investigation.
When three more dead blondes turn up all brutally strangled and deposited near Gilda’s favorite haunts, she is pegged as a prime suspect for the murders. Frustrated by Carlo’s chilly detective persona and the mean girl antics of Carrie Ann’s meddling relatives, Gilda decides to launch her own investigation. She discovers a gaggle of suspects, among them a yoga instructor in need of anger management training, a lecherous photographer, and fourteen ex-boyfriends.
As the puzzle pieces fall into place, shocking revelations emerge, forcing Gilda to confront the envy and deceit she has long overlooked.

Trailer
https://youtu.be/QURgFbybQVw
Buy Links
Amazon (Canada) - http://is.gd/t0g1KZ
Amazon (United States) - http://is.gd/jADjPp
Amazon (United Kingdom) - http://is.gd/8mknFJ
Amazon (Australia) - http://is.gd/r843iX
Kobo - http://is.gd/BpO9gY
Bio
In 2008, Joanne took advantage of early retirement and decided to launch a second career that would tap into her creative side and utilize her well-honed organizational skills. Slowly, a writing practice emerged. Her articles and book reviews were published in newspapers, magazines, and online. When she tried her hand at fiction, she made reinvention a recurring theme in her novels and short stories. A member of Crime Writers of Canada, Sisters in Crime, and Romance Writers of America, Joanne writes paranormal romance, cozy mysteries, and inspirational literature from her home base of Guelph, Ontario.