Is Amber Roberts a killer—or a victim?

Congratulations to "Lynn B., the winner in Debra's giveaway. Thank you to all who participated!

In the next Faces of Evil Series from USA TODAY bestselling author Debra Webb, is Amber Roberts a killer—or a victim?

The new Faces of Evil continues with STILL WATERS! I am so thrilled to bring you another story in the Faces of Evil series. I hope you got your copy of DARK WHISPERS last month. It’s still available wherever books and ebooks are sold! 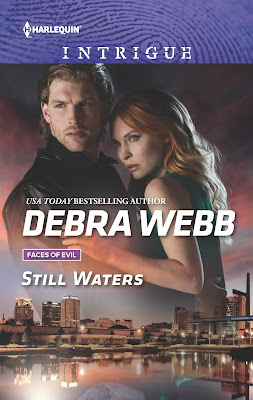 STILL WATERS introduces a new investigator working for Jess Harris Burnett. Sean Douglas is back in Alabama after a career crash in Los Angeles where the client he was assigned to protect died. Sean needed to come home to heal but when he’s assigned a case with a local celebrity he isn’t so sure he can handle the pressure or the woman. Amber Roberts is either a potential victim or a murderer, Birmingham PD can’t seem to decide which. Amber is counting on Sean to help her prove she’s telling the truth and to solve this mystery. But can he keep her alive in the process? Amber is determined to be a part of the investigation and she’s digging way too deep under Sean’s skin.

I’m certain we’ve all experienced the need to go home again at some point in our lives. Even if only for a day or for the rest of our lives there is no comfort place like home—whether it’s the house or town where we grew up or just the loving arms of family and friends. During my years in the military I remember most vividly the visits home to family and friends. Although we had grown a great deal from our experiences living in so many places, those experiences and the distance helped me to put down even deeper roots once I was home again.

Enter to win a digital copy of DARK WHISPERS & STILL WATERS by answering this question in the comments section below: I’d love to hear about your experiences with finding your balance after an unexpected turn.

About the author:
DEBRA WEBB is the USA Today bestselling author of more than 100 novels, including reader favorites the Faces of Evil and the Colby Agency series. She is the recipient of the prestigious Romantic Times Career Achievement Award for Romantic Suspense as well as numerous Reviewers Choice Awards.

In 2012 Debra was honored as the first recipient of the esteemed L. A. Banks Warrior Woman Award for her courage, strength, and grace in the face of adversity. Recently Debra was awarded the distinguished Centennial Award for having achieved publication of her 100th novel. With this award Debra joined the ranks of a handful of authors like Nora Roberts and Carole Mortimer.

With more than four million books in print in numerous languages and countries, Debra’s love of storytelling goes back to her childhood when her mother bought her an old typewriter in a tag sale. Born in in Alabama, Debra grew up on a farm. She spent every available hour exploring the world around her and creating her stories. She wrote her first story at age nine and her first romance at thirteen.

It wasn’t until she spent three years working for the Commanding General of the US Army in Berlin behind the Iron Curtain and a five-year stint in NASA’s Shuttle Program that she realized her true calling. A collision course between suspense and romance was set. Since then she has expanded her work into some of the darkest places the human psyche dares to go.

About Still Waters: Instead of reporting the news, Amber Roberts is the news. Has the beautiful journalist murdered someone she hardly knew or has she been brilliantly framed? Evidence points to the former. Enter Sean Douglas, the hottest bodyguard Amber's ever seen. But Amber is all about her career, and giving it up for romance is unthinkable. Sean, she learns, has his own guilty reason for keeping things professional. The last woman who trusted him ended up dead. And now the same fate may await Amber, unless Sean can protect her while guarding his heart. Because someone is watching and terrorizing Amber…someone no one would suspect…