Wow! How much do we love those courageous characters? You know, the alpha males and the gutsy heroines that seem to ooze nerves of steel from their very pores. As authors we send our characters into situations we would never, ever, not-in-a-million-years get into, and we ask them to prevail with keen finesse and dashing good-looks—well, okay, maybe a little stubble on their chin.  Ahhh, they are everything that we are not—and that is the beauty of it all, isn’t it? 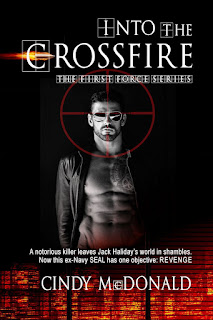 I love to write in the evening—it is the quiet time of day, and my thoughts turn to my latest First Force adventure, and what dodgy debacle I will ask team First Force to walk into without hesitation. I finish cleaning up the dinner dishes, check to see what my husband is watching on TV, I pour myself a glass of wine, and then retire downstairs to my office where my characters live inside my computer. They are waiting for me—sometimes in a panic, depending on what state of affairs I’ve left them in the last time we met. I click on the file, take a deep breath, a sip of the wine, re-read what I wrote the night before, and then I ask myself one question: what if?

Sometimes I could swear that I hear them groan when the what if tumbles from my lips.

Truth be told, we authors really don’t live that exciting or death defying lifestyles. Nonetheless at the end of our fingertips we wield the sword of courage at our characters and expect—no demand that they deliver accordingly. Is it because we wish that our lives were as sexy as theirs? Are we cowardly thrill-seekers? Truthfully, I must admit that I really don’t care.

The dishes are neatly stacked in the washer. My husband is watching TV. I’ve just poured myself a glass of Pinot Noir and descended the stairs to my office.  As I take a sip of the wine, the computer screen displays my latest manuscript, Into the Dawn—book #5 of my First Force series. 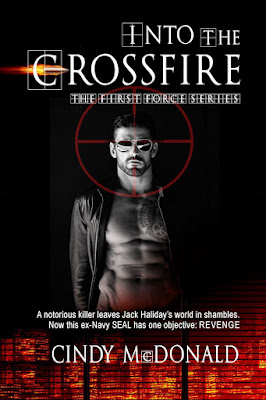 Into the Crossfire--Book #1 First Force Series

Excerpt:
Walt tightened his fingers around the steering wheel until his knuckles turned white. His jaw clenched while he watched Gunner drag Rayne down the steps, through the crowd of men, and to the corner of the SUV. Gunner wiggled his fingers at Jack to get out of the vehicle.
Jack opened the door and slid out. He scanned the crowd and smiled. “Hail, hail the gang’s all here.” He nodded at each as he acknowledged them, “Hey, Nick, Phelps, Bernie,” Pretending to strain to see, he slid the sunglasses to the edge of his nose, and bent forward a bit, “Gee-zuz, is that you, Fingers? You’re uglier than I remember, but I must say that the dirty red dew rag you’re sporting brings out the lovely shade of blood-shot in your eyes.”
Jack locked eyes with Gunner. With his middle finger he slid the sunglasses back into place. “Still preying on the innocent, huh, Charlie? Women and children make easy targets, don’t they? I won’t go down so easy.”
Gunner’s lips turned up into a wicked curl. He pushed Rayne toward Jack. She stumbled but regained her footing while clawing at her dress to cover her exposed chest. As she passed, she squeezed Jack’s arm with a trembling hand. “Jack…”
“There’s nothing you can do for me, Dr. Lee,” he said. “Now go with Walt.”
Rayne swallowed hard before she climbed into the vehicle. Slowly, Walt made a U-turn and headed for the narrow road from which he and Jack came. Too easy. Rayne watched over her shoulder. Her stomach was in knots knowing what they had planned for Jack Haliday and for her and her uncle.
She turned to Walt. “We aren’t really going to leave him, are we?” she whispered.
Walt only nodded at her. A small sob escaped before she could smother it. “It gets worse, they have four girls held up in that shed. They’re going to sell them into prostitution.”

Author Bio:
For twenty-six years Cindy’s life whirled around a song and a dance. She was a professional dancer/choreographer for most of her adult life and never gave much thought to a writing career until 2005. She often notes: Don’t ask me what happened, but suddenly I felt drawn to my computer to write about things that I have experienced with my husband’s Thoroughbreds and happenings at the racetrack—she muses: they are greatly exaggerated upon of course—I’ve never been murdered. Viola! Cindy’s first book series, Unbridled, was born. Currently there are five books in the series.

Cindy is a huge fan of romantic suspense series’, especially with a military ops theme. Although she isn’t one to make New Year’s resolutions, on New Year’s Day 2013 she made a commitment to write one. At this time, there are four books in her black ops series, First Force: Into the Crossfire, To the Breaking Pointe, Into the Dark., and To the Brink. Book number five Into the Dawn is scheduled to release in September of 2017.

People are always asking Cindy: Do you miss dance? With a bitter sweet smile on her lips she tells them: Sometimes I do. I miss my students. I miss choreographing musicals, but I love writing my books, and I love sharing them with my readers.

Cindy resides on her forty-five acre Thoroughbred farm with her husband, Bill and her Cocker Spaniel, Allister near Pittsburgh, Pennsylvania.