Congratulations to "Laura" and "Mary P.", the winners in Cindy's giveaway. Thank you to all who participated! 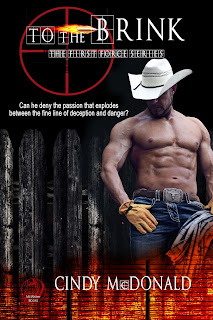 So…how do you like your sexy alpha hero? Is he muscle bound, tall, a nest of thick hair, strong jaw, eyes you could gaze into for hours, and of course protective at all costs?  Perfect—that’s how they are supposed to be, right? Well, not this time my friends. Oh, by all means Dan Garrison is gorgeous and strong and protective, but perfect? Um, I think not. In book number four of my First Force series, To the Brink, First Force operative Dan Garrison suffers from acute OCD—that’s right, everything has a place and everything is always in its place.

I don’t know about you but my husband suffers from being a total slob—a little OCD around our house would go a very long way. Is this the reason that I created such a character—because I’m constantly picking up after my spouse? Hmmm, I’ll have to ask my therapist—oftentimes I wish I had one. But it’s definitely a thought for a future blog post.

Does being totally neat and tidy beyond belief make for a good alpha character? Are hardwood floors polished to a laser sheen sexy? Hey, I’d seriously consider it foreplay! However, my heroine, Tess McMillan isn’t so sure she can handle Dan’s self-imposed perfection, but she needs him and team First Force desperately. Dan is not her idea of a perfect alpha. Then again, Tess soon realizes just how flawed her late husband and their relationship was.

Sexy alpha characters—they are the cornerstone of romantic suspense and everyone’s vision or fantasy of the perfect alpha is different. I like an alpha who has a great sense of humor and of course duty. Flaws? Well, c’mon, everyone is flawed in some way. That said, I truly enjoyed writing the character Dan Garrison, but I’ll warn you—he’s got more flaws than just OCD! 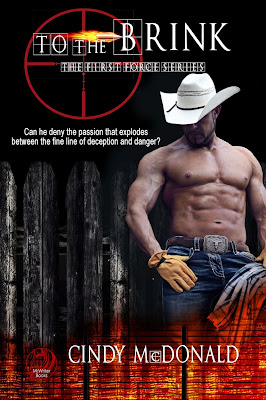 Tess thought her life would settle after the death of her husband, Ballard Crafton. After all she’d escaped Russia with the formula to his secret serum that transforms ordinary soldiers into unstoppable machines. She was certain the Russians thought Ballard’s notes were lost in the explosion that destroyed his lab, but one man believes that Tess possesses the precious information, and he wants it for his own wicked agenda.

Hired assailants dog her night and day. She needs help and she needed it weeks ago. Now she turns to First Force for protection only to find the team is away with only one operative at First Force headquarters holding down the fort—Dan Garrison.


How can Dan keep her safe when he isn’t sure that he believes her story? How can Tess gain his trust, and how can either of them deny the underlying passion that is exploding between the fine line of deception and danger?

Excerpt:
He turned on the light in the bathroom. Tess stepped in. Her jaw dropped. The hardwood floors flowed throughout the house.  The bathroom was surrounded by floor to ceiling windows that looked out over an easy slope behind the house where a wide lake yawned out across a field. The sky was giving way to the cloak of night, the sun lowering ever so slowly leaving feathery swaths of purple and pink above the herd of grazing Belted Galloways.

A stacked stone fireplace stood in the corner of the room. A sunken whirlpool tub lay just below the hearth. Even though no flames cracked or danced inside the firebox, she could almost feel the warmth of an imaginary fire and the bubble of the steaming water. She looked up to find a huge skylight over the tub.

Votive cups filled with candles dotted the massive mantel, some sat among the stones. Intricately placed just outside the tub, three big white fluffy towels rolled tightly in long tubes were stacked in a pyramid.

“Each room is more impressive than the last. I can’t decide if you’re gay or if you have a super acute case of OCD.”

Dan crossed his arms over his massive chest. “Nice ... women are all the same. If you’d come into my house and found stacks of dirty laundry and piles of dishes in the sink, you’d accuse me of being a slob. But! Since the house is well kept, I’m either gay or obsessive.”

Tess couldn’t stifle the chuckle that bubbled to the surface. He was big. Broad shoulders that narrowed through chiseled abs that melted into lean hips. He sported a very trim military hair style. His jaw was square and strong. She doubted that he was gay, too much testosterone was bouncing off the man, but she pushed his buttons anyway. Matching his crossed arm stance, she asked, “So ... which is it? Gay or OCD?”

Giveaway:
Cindy will be giving away 2 kindle copies of her new release, To the Brink, book #4 First Force Series chosen from comments.

For twenty-six years Cindy’s life whirled around a song and a dance. She was a professional dancer/choreographer for most of her adult life and never gave much thought to a writing career until 2005. She often notes: Don’t ask me what happened, but suddenly I felt drawn to my computer to write about things that I have experienced with my husband’s Thoroughbreds and happenings at the racetrack—she muses: they are greatly exaggerated upon of course—I’ve never been murdered. Viola! Cindy’s first book series, Unbridled, was born. Currently there are five books in the series.
Cindy is a huge fan of romantic suspense series’, especially with a military ops theme. Although she isn’t one to make New Year’s resolutions, on New Year’s Day 2013 she made a commitment to write one. At this time, there are four books in her black ops series, First Force: Into the Crossfire, To the Breaking Pointe, Into the Dark., and To the Brink. Book number five Into the Dawn is scheduled to release in September of 2017.
People are always asking Cindy: Do you miss dance? With a bitter sweet smile on her lips she tells them: Sometimes I do. I miss my students. I miss choreographing musicals, but I love writing my books, and I love sharing them with my readers.
Cindy resides on her forty-five acre Thoroughbred farm with her husband, Bill and her Cocker Spaniel, Allister near Pittsburgh, Pennsylvania.

Giveaway ends 11:59pm EST Sep. 23rd. Please supply your email in the post. You may use spaces or full text for security. (ex. jsmith at gmail dot com) If you do not wish to supply your email, or have trouble posting, please email maureen@justromanticsuspense.com with a subject title of JRS GIVEAWAY to be entered in the current giveaway.