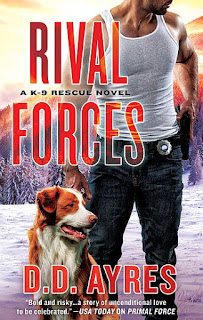 DESIRE IS A FORCE TO BE RECKONED WITH

When it comes to training K-9 patrol dogs, Yardley Summers always trusts her instincts. But when it comes to dating men, she keeps her heart on a very short leash. Mostly, she’s too busy with her four-legged trainees at Harmonie Kennels to commit to a relationship. Only two men have managed to distract her: a handsome Doctors Without Borders physician who’s suddenly gone missing—and the red-hot dog trainer from her past who’s suddenly back in her life…


Now a K-9 rescue team leader, Kye McGarren has never forgotten the days he trained at Yardley’s camp—or the nights he spent in her arms. When he hears that Yardley is on a mission to find the missing doctor, Kye is determined to keep her out of danger. With his K-9 partner by his side, he joins Yardley on a death-defying mission—one that reignites their mutual passion. Will Kye be able to rescue his romantic rival…without losing the woman he loves?

The high-pitched shriek warned Kye McGarren of an incident taking place on ski slope three. He shifted the view in his field glasses in time to see a female skier plow into a snowbank that formed one edge of the slope and tumble headfirst onto the other side.

Kye lowered his glasses to find his ski patrol partner for the week, Joe Saunders, grinning at him from their perch at the top of the slope. “I’m cutting you slack, old man. She looks hot.
But I’ve already got a date for tomorrow night’s New Year’s Eve party.”

Kye grunted. At thirty-six, he was hardly old. Moreover, it was against company policy for staff to socialize with guests. Not that he would bring that up here. Technically, Joe had seniority. What Joe and the SAR squad members didn’t know was that they worked for Kye.

“Call it in. I’ll sit second until the EMS guys get there.” Kye adjusted his goggles and then picked up Lily, his SAR K-9, and slung her across his shoulders.

Kye grabbed his poles off the edge of his snowmobile and pushed off down the hill in a silky swoosh.

Lily barked, a bright eager sound that from a distance sounded a bit like a coyote. Often mistaken for small golden retrievers, tollers had bright-red fur but possessed higher energy and intelligence. With a white blaze down her chest, a rosy-pink nose, and a narrow wedge-shaped head like a fox’s, Lily looked dainty. But she was as tough as a wolf, with the balance and agility of a mountain goat. No terrain was too tough or too steep. She also had a nose that could pinpoint human scents buried beneath several feet of dirt, mud, water, or snow with equal ease.

He came up on the group of skiers who had paused at the edge of the slope where the female skier had gone off into the rough a little faster than necessary. They were laughing and taking pictures with their cell phones.

He lowered Lily to the ground and rubbed her fur briskly with both hands to energize and warm her. “Ready, Lily. Search! Search!”

With her flag of a tail held high, Lily barked twice as she plunged over the berm. SAR dogs worked off the leash in snow. It allowed them to cover search territory much faster than a slower-moving human could. In an avalanche situation, seconds counted.

Even as Kye dug his poles in the ground and kicked off his skis, Lily was barking in a key that meant she had found something.

The skier, in a bright-pink parka, was about ten feet beyond the edge of the slope, skis and poles scattered in the snow. She was kneeling in unpacked powder, and digging. If the volume of her curses was any indication, she was okay.

Kye waded through the calf-deep powder to the skier. “Are you injured? In pain? Any other problems?” 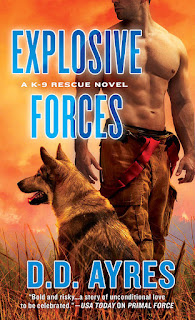 EXPLOSIVE FORCES
Danger is heating up…

When Carly Reese’s beloved fashion boutique catches fire, she sees her dreams go up in smoke. The good news is that Carly was saved from the flames by a barking dog nearby. She soon discovers the heroic pooch is a trained K-9 who’s guarding his unconscious partner …a gorgeous firefighter who ends up in Carly’s arms.


Noah Glover and his K-9 are a fearless duo, and Noah has clearly met his match with the brave, beautiful Carly. Soon they team up to track down the arsonist behind the blast – a psychotic criminal who’s intent on framing Noah. Meanwhile, the sparks between Noah and and Carly could ignite a five-alarm fire. Should they smother their feelings in the name of justice…or fan the flames of passion? Find out in Explosive Forces!

Available for pre-order for November 1 release!

About D.D.
A veteran author of romance and women’s fiction, D.D. Ayres now writes Romantic Suspense, and loves it! She believes the lure of romance is always the human connection. Put that connection in physical jeopardy, and we learn a bit more about who we really are.

With her K-9 Rescue series, D.D. hopes you will enjoy her sexy, suspenseful portrayals of K-9 teams at their best.

D.D. lives in Texas with her husband and a soft-coated Wheaten Terrier named Zoe.