The next novel in the Omega Sector: Critical Response series, OVERWHELMING FORCE, is available for pre-order now, and releases mid-November.

But Harlequin Intrigue just sent me the cover. May I present to you, Joe Matarazzo, billionaire playboy and hostage negotiator for Omega Sector’s Critical Response Unit. 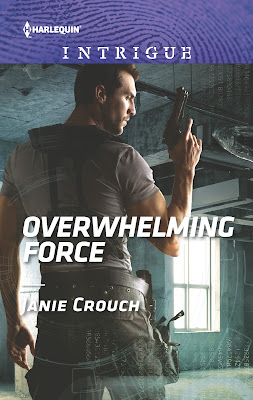 Harlequin authors don’t get final approval of our covers, so receiving them are always a surprise. This time it was a great surprise – I love it! This one is the first of any of my books where only the hero is featured.  And that bicep, man! Swoon.

Of course, my teenagers were quick to point out that my name is written across his butt. Hey, I’ve got no problem with that. I hope you’ll check it out (the book, not my name across his butt.) 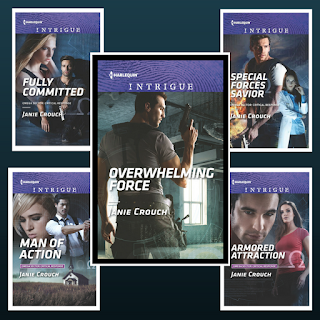 He lost her once. He won't lose her again.


Despite an illustrious career as a top hostage negotiator, Joe Matarazzo is haunted by the past. It was a year ago that three innocent lives were lost under his watch. But Joe isn't the only one who remembers that day. When Joe's exes begin to fall victim to a violent stalker, Joe seeks the help of Laura Birchwood—a lawyer and the woman he once loved. Despite old wounds, Laura agrees to help Joe find out who's framing him. And while they expect to be met with danger, they're unprepared for passion that still burns strong, and their determination to give what was between them a second chance.

“Casanova has struck again. I know it’s hard, fellas—don’t be jealous just because Joe Matarazzo looks better on your girl than her outfit.”

Joe rolled his eyes and tried to snatch the newspaper clipping out of Derek Waterman’s—Joe’s Omega Sector Critical Response Division colleague—hands. Derek shifted slightly, holding the paper just beyond Joe’s reach since they were both strapped into the bench seat of the twin-engine helicopter.

Who even read a physical newspaper anymore? Joe hadn’t looked at a news report that wasn’t on his smart phone or computer for years. Not that his dating life was news, print version or otherwise.

Joe had no idea why so many people would want to read about his love life. Yeah, his family had money—a lot of it—and yeah, he’d grown up with some Hollywood A-listers and ended up photographed a lot.

And yeah—he grinned just a little, glancing out the helicopter’s window as Derek continued to read and the seventy miles between Colorado Springs and Denver whirled past—Joe tended to be a bit of a bad boy. Had a reputation with the ladies.

So what? He liked women.

Joe tuned out as Derek read Natasha’s impressive list of family credentials through the headphones that allowed all of them to communicate with each other. Jon Hatton and Lillian Muir—the first an Omega profiler and the second Omega SWAT like Derek—listened raptly from the pilot and copilot seats where Lillian controlled the aircraft.

Seriously, Joe’s colleagues loved this stuff, ridiculous as it may be. They had a whole scrapbook full of Joe’s clippings.

Joe had grown up with press and had learned to pretty much ignore it. The press had their own agenda and nobody’s best interests in mind but theirs. He learned that lesson a little too late, but learned it.

And it wasn’t like paparazzi followed him around. Yet for whatever reason, gossip sites and society pages loved to report on his dating life. A dating life he had to admit was pretty extensive. Everyone called him Casanova. The press and even his colleagues at Omega.

Joe wasn’t offended. It took a hell of a lot more to offend him.

Joe raised his gaze heavenward with a long-suffering sigh and waited for the rest, but that was it.

“Last seen?” Joe finally succeeded in snatching the paper away from Derek. “They make it sound like I killed her and hid her body.”

“Oh, it sounds like you did something to her body, but I don’t think anyone figures you killed her. At least not literally.” Lillian snickered from her pilot’s seat.

“I have no idea how you get so lucky, dude.” Derek closed his eyes and leaned farther back on the bench seat next to Joe. “No matter what city we’re in, the women throw themselves at you.”

Joe could’ve pointed out that speeding their way to a hostage negotiation scene was probably not the time to discuss the press version of his love life. But he knew this sort of distraction helped keep the team loose and relaxed.

There would be plenty of time for tension and focus when they landed and assessed the scene.

Joe shrugged. “What can I say? I’m #blessed, man.” He made the hashtag symbol with his hands, tapping his fingers together.

“Don’t make me shoot you. I’d catch flack for shooting an unarmed man.” Derek didn’t open his eyes as he said it.

Joe was the only unarmed person in the helicopter. Although he was trained in the use of a number of weapons, he almost always went into situations unarmed.

He was Omega Sector’s top hostage negotiator. And he was damn good at his job.

OR CONTEST WILL BE AVAILABLE ON MY WEBSITE:
http://www.janiecrouch.com/contests