Congratulations to "Janice H." and "Laura", the winners in Alyssa's giveaway. Thank you to all who participated!

The other day, my four year old son excitedly leapt from his car seat and raced to my passenger side door.  He pulled it open after a couple of failed attempts and with a large grin proudly announced, “I help you, Ma.”  (I do not know where he got the New York accent, however he uses it devotedly.)
I accepted his tiny, offered hand with a smile and climbed out of the car.  Swooping him into a giant hug, I thanked him for his assistance.  He danced into the house singing, “I help Ma. I help Ma.”
I had to laugh, he was mirroring an action he had seen his father perform on numerous occasions – open a door for a lady (not just his mother).  In today’s society where less emphasis is placed on manners and more on efficiency, I appreciated my son’s small gesture of civility.  And no, I do not believe a woman’s place is in the kitchen.  Trust me you do not want me to use your stove, unless you are looking to meet a fireman. 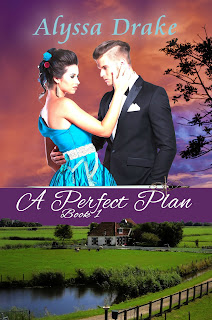 However, I do believe in common courtesy.  One of my favorite things about the Victorian Age and the reason I love writing about this particular time period is the display of social graces.  Ladies and gentlemen behaved by a different code of conduct, which reflected the delicate nature of woman and the less barbaric side of men.  Without civility we are nothing more than animals.
Chivalry does not need to be a grand event.  Sometimes it is a small selfless action, which means more to the person who receives it, than to the person who gives it.  My favorite movie scene about courtesy comes from the film, While You Were Sleeping.  Lucy tells Peter that he is heroic because he gives up his seat on the train every day.  Peter responds that the action is not heroic and Lucy counters, stating it is to the person who sits in it.
For the past year and a half, I had the tremendous pleasure to live in the Victorian Era as I wrote my debut novel, A Perfect Plan: Wiltshire Chronicles and its follow up, An Imperfect Engagement: Wiltshire Chronicles (no release date yet).  It is an historical romantic suspense about a country girl raised by her brother and uncle, who is thrust into society when her brother vanishes.  Unprepared for social expectations, Samantha must discover how to walk a fine line between who she is and how society requires her to act.  Thankfully she has the help of her sister-in-law, Wilhelmina (who guides Samantha through every awkward societal interaction) and her guardian, Benjamin (a charming rake who is a quintessential gentleman in disguise).
I hope you enjoy your time in the Victorian Age.  I invite you to lose yourself in Wiltshire.
Happy reading,
Alyssa 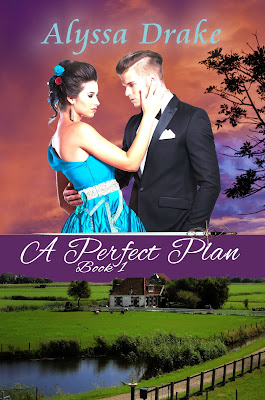 Lose yourself in Wiltshire….

Samantha Hastings lived a quiet, peaceful life on her family’s country estate.  With no man to order her around and no stifling society rules to follow, she considered herself blessed.  However, when her brother’s ship sinks during a short trip to France, Samantha receives a request from her sister-in-law to return to town and manage the late Earl’s finances.  Suddenly thrust into society, Samantha faces an unfamiliar world and a pair of very familiar green eyes.
Lord Benjamin Westwood never intended on following through with his rash promise to his best friend.  Now, with Edward’s death, Benjamin becomes the unwilling guardian to Edward’s bratty little sister, who has grown up considerably since the last time they met.  His intention to marry her off to the first available suitor is thwarted when he finds himself falling for Samantha’s unique demeanor.  He lights upon the perfect plan; a marriage of convenience, giving him the opportunity to romance Samantha without distraction.
However, when they discover Edward’s disappearance was due to foul play, Benjamin’s perfect plan begins to quickly unravel.  Now, Samantha is in more danger than either of them realized and Benjamin is running out of time.

Excerpt from Chapter 2
Now he only had one more obligation to fulfill tonight.  With Lord Edward Hastings’ unfortunate demise, a new duty rested on his shoulders.  He was now the guardian of Miss Samantha Hastings, Edward’s little sister.  Although a woman of her age hardly needed a guardian, chaperone would be a more appropriate word.  Whatever the title may be, he now had the added responsibility of approving a husband for the lady; a task which placed him in direct control of her future.  Not exactly a role he wanted to play.  However, he just needed to marry her off to the first available suitor and he would be free of his promise.  Still unmarried, he assumed she would be plain and willing to accept the first man who proposed; considering this was her first season, she would need guidance in that respect.  Lady Hastings, Edward’s widow, would be able to assist with the husband hunting process.  He decided he would leave the matching to her and then just approve whichever man made it through the tedious courting process.
Benjamin tried to remember the face of Edward’s baby sister.  Ten years ago, the last time he met Samantha, she attacked him with a foil.  Her face screwed up with raw determination and a scowl as she swung at him from the landing of the Hastings’ country estate stairwell.  Her verbal assault was almost as vicious; Edward must have been responsible for that lack of manners.  A small girl with plaits and a sharp sword; the memory brought a smile to his lips.  He chuckled softly, rubbing his left hand unconsciously.  A tiny puckered scar still blemished his left hand.
It seemed difficult to picture Samantha as anything else but a scrawny, ill-mannered child.  He assumed, as an adult, she must resemble her brother; same chestnut hair, same blue eyes.  Although decidedly more feminine, he corrected the image in his head.  He would have no difficulty spotting her this evening.  He only hoped she was unarmed.

Author Bio
Alyssa Drake has been creating stories since she could read, preferring to construct her own bedtime tales instead of reading the titles in her bookshelves. Enraptured with all types of writing, Alyssa has tried her hand at short stories, collaborations and poetry.  However, her first love has always been books.  She thoroughly enjoys strong heroines and often laughs aloud when visualizing conversations between her characters.
Alyssa graduated from the University of the Pacific, with a B.S. in business and a concentration in French literature.  Currently she resides in Northern California with her blended family, where she works full-time at a chocolate factory.
She believes everyone is motivated by love of someone or something.  One of her favorite diversions is fabricating stories about strangers surrounding her on public transportation.  Alyssa can often be found madly scribbling notes on a train or daydreaming out the window as the scenery whips past.

GIVEAWAY:
When was the last time you experienced a chivalrous act?  What was it?  Comment below to be entered for a chance to win one of two eBook copies of A Perfect Plan.

Giveaway ends 11:59pm EST August 19th. Please supply your email in the post. You may use spaces or full text for security. (ex. jsmith at gmail dot com) If you do not wish to supply your email, or have trouble posting, please email maureen@justromanticsuspense.com with a subject title of JRS GIVEAWAY to be entered in the current giveaway.
Posted by Maureen A. Miller at 12:30:00 AM