Congratulations to "Trish J.", the winner in Veronica's giveaway. Thank you to all who participated!


I just got home from Thrillerfest in New York City. Thrillerfest is the annual conference for the International Thriller Writers. It takes place in New York City every year.
The International Thriller Writers is an honorary society of authors, both fiction and nonfiction, who write books broadly classified as “thrillers.” This would include (but isn’t limited to) such subjects as murder mystery, detective, suspense, horror, supernatural, action, espionage, true crime, war, adventure, and myriad similar subject areas.
I joined ITW back in 2015 when my first thriller “Untrue Colors” was published and was included in the 2015 Class of Debut Authors. This program is a fantastic entry into the literary world. The highlight of the program is being introduced to the members of the organization in a breakfast presentation ceremony. The group for 2016 came from around the world to take part in the celebration. 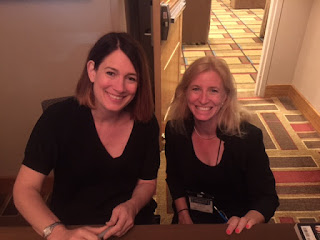 Thrillerfest also includes workshops for both writers and readers. The highlight for me is always the interviews with famous authors. This year CJ Box, Gillian Flynn, and Heather Graham were among those interviewed on the main stage. The interviews are always done by their contemporaries and can sway far outside of normal press interviews, revealing the human side of some of these mega stars.
I’d highly recommend going next July. The city is full of excitement and the authors are engaging and accessible. And while we wait for next July, I hope you take the time to indulge in my True Lies series. All three books are available for download now and I can’t wait to hear what you think! 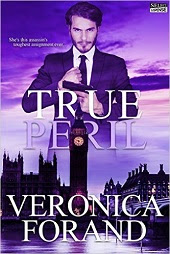 Dive into the world of drug cartels and assassins in this thrilling conclusion to Veronica Forand’s True Lies series in TRUE PERIL.

She's this assassin's toughest assignment ever...

Socialite Trista Patterson has turned her back on her life of privilege and dedicated herself to helping others. Her mission to protect the world’s children often takes her into the bleak and violent underbelly of third world countries. When a kidnapping attempt goes wrong, Trista quickly finds herself running for her life...and married to a man she just met...as she’s placed at the top of the Cartel’s most wanted list.

Dane O’Brien has spent his life in the shadows. Once a lethal assassin he grew tired of losing his soul with every hit, trading his gun and missions for a conference table and office politics as an undercover operative for the CIA. But when visiting his humanitarian sister turns deadly, Dane finds himself swearing to protect her beautiful and passionate friend Trista no matter the cost...even if it means stepping back into the world he swore never to return to. Although falling for the tough-hearted Trista is easy, keeping her alive is hard.

Find out more at: Amazon | Barnes and Noble | Kobo | iBooks 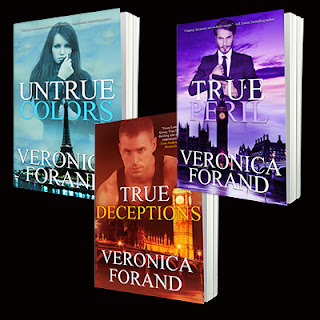 A Golden Pen winner in romantic suspense and a triple finalist in the Daphne Du Maurier Award for Excellence in Mystery/Suspense, Veronica Forand is an attorney and a novelist. She's lived in Boston, London, Paris, Geneva, and Washington, DC and currently resides near Philadelphia. An avid traveler, she loves to roam across continents with her husband and kids in pursuit of skiing, scuba diving, and finding the perfect piece of chocolate.

Read more about her upcoming releases and appearances at http://veronicaforand.com/.

Giveaway:
One lucky reader leaving a comment or email will win their choice of an eBook from the True Lies series.

Giveaway ends 11:59pm EST July 14th. Please supply your email in the post. You may use spaces or full text for security. (ex. jsmith at gmail dot com) If you do not wish to supply your email, or have trouble posting, please email maureen@justromanticsuspense.com with a subject title of JRS GIVEAWAY to be entered in the current giveaway.