They tell me it will be great for research...

Congratulations to "Laura S.", the winner in Maureen's giveaway. Thank you to all who participated!

Recently I performed my civic duties as a juror on a murder trial. First, I'll state that I am humbled by the diligent and thorough process of our law. Everyone in every role of the court system was professional and informative. Second, I'll state that there is no comparison to watching something on TV and experiencing it in person. I walked away from the week-long trial very saddened. I am sad for the victim. I am sad for the defendant. I am sad for all the families involved. I spent most of the final day crying. The sheer responsibility for twelve souls is overwhelming. I will never again roll my eyes when I see the Jury Duty summons come in the mail.

During the jury selection process, both prosecution and defense grilled each potential juror, asking their occupation, the occupation of their spouse, the occupation of their great grandmother--okay, perhaps I'm exaggerating with the last one, but you get the point. With a potential sentence of life in prison without parole on the line, they are extremely diligent in their selections, and the vetting process is exhausting. It took three days just to pick the 12-person jury.

I'm not very good at public speaking so when all eyes in the courtroom turned to me as the prosecutor asked, "So, it says here that you are an author. What kind of books do you write?", I slunk down as far as possible in my chair and called out, "Romance." The prosecutor (who I kid you not-looked exactly like Marcia Clark) smiled widely and said, "My favorite kind!" Then it was the defense attorney's turn. He says, "I know the prosecutor reads your type of books, but what were they again?" I cleared my throat and called out confidently, "Romance." (Yay romance authors! Fist pump!)

Anyway, you are now pitted with 12 individuals that you have never met before for a gut-wrenching week of testimonial and photographs that you never ever want to see. All this time these twelve strangers are saying to me, "but it will be great research for your books." In fact, at the end of the trial the jurors collected all of their notes and handed them to me to use for future books.

That was thoughtful of them, but the problem is that I never want to go back and read those notes. I like research when it is anonymous. This trial touched me. It became too personal to ever 'use' as a reference. 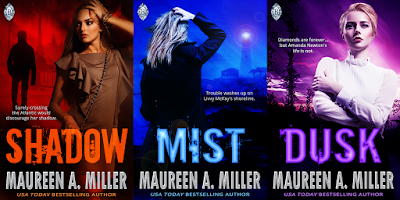 Has anyone had jury duty?

I'm happy to report that there are no trial scenes in the BLUE-LINK romantic suspense series! :)  These books are all standalone. The final book, DUSK was just released last month. 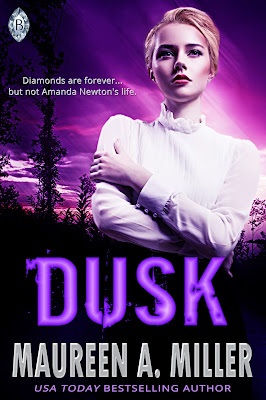 As a young girl, Amanda Newton witnessed the brutal murder of her parents. As an adult she is targeted by their murderer.

Beautiful. Reserved. Mysterious. Amanda Newton, the CEO of BLUE-LINK epitomizes control with her adept handling of the global company. But that control is threatened with a series of attacks against her.

Ray Gordon, a former Navy SEAL is looking to open his own security firm. One more contracting job with BLUE-LINK would complete the funding. When he is hired to protect Amanda Newton, the Ice Queen herself, he never bargained on falling for her.

Amanda has something her attacker wants. He has waited over twenty years to claim it, and he will destroy anyone close to her to get it.

...but he's met his match in Ray Gordon.

Or you can start the BLUE-LINK series
with SHADOW for only $0.99!