Attacked in my Bedroom Over Thirty Years Ago

Why do some authors gravitate towards writing one genre from another? When looking for your next book to read do you reach for the Historicals, or are you more interested in Non-Fiction or Suspense? What is your favorite type of book? If you’re reading this blog, I’m going to assume you have an interest in Romantic Suspense.

I write Suspense (always with Romantic Elements.) As much as I want to, I can’t rattle off a marketable Contemporary Romance with no element of Suspense. Just as I’m typing away on my lovely romantic story, a stalker from the protagonist’s past, or a disgruntled ex-husband, or a psycho roommate slip onto the page and take over.

Writing a mystery takes a huge dose of thinking time for me. I spend many weeks plotting, measuring, reading, and working the mystery in an unraveling fashion so just the right amount of clues are given and the reader won’t easily guess the ending. Suspense writing adds layers to a story. It’s exhausting sometimes and this is why Suspense authors have those white boards, charts, plotting spread sheets. and recipe cards all over the floor-- to insure a great plot.

Although I read a wide variety of genres, most of my favorite books have Suspense, Mystery or Thriller aspects. Therefore, when I write a novel, I include suspense and romance. Strangely, most of my books and stories include a ghost, another suspenseful aspect because of the unpredictability factor of the Supernatural.

Lately, I’ve been wondering why I’m drawn to stories of women coming out the other end of surviving something horrific and living to tell the story. I watch Dateline and 48 Hours and sit glued to these crime shows until their conclusions. Unlike them, I focus on the happy endings for my protagonists, whether they are an innocent or a police inspector. All my heroes have happy endings.

Recently, I realized that I have my own terrifying story of suspense that might have precipitated my fascination with crime against women.

When I was twenty-two, I was attacked by a man in my bedroom. I lived in a ground floor apartment in Vancouver Canada and he came in through the bedroom window with a garden hose, drenching my bedroom with water. He’d simply stepped from the ground, through my window where he’d removed the screen behind my closed drapes. I didn’t hear him coming. Or the hose. This was because I had music playing while I lay in bed reading what I’d just written. The window was situated behind my bed.

First I saw a hose over my left shoulder shooting water into my room and my initial thought was that I’d burst a pipe, then I saw a hand on the hose and realized someone was on the other end. Someone bad. When the curtains parted, a grown man came at me. The man’s face was covered partly by a handkerchief like he was some sort of bandit. He wore jeans, had blonde, shoulder-length hair and was slight enough that I was able to fight him. I screamed. My neighbors told me later that they heard screaming but didn’t leave their apartments. The man upstairs said he didn’t think it was real, or anything other than a Friday night, festive squeal, although I can’t imagine sounding like I was having fun. As I fought my attacker and pushed him away from me, my fear was so great that when I tried to ask him “What are you doing?” my words came out slurred like I was hearing-impaired and trying to speak. At that moment, he was pushing me down to my back. But, hearing my words made him stop momentarily. What went through his mind when he heard my impaired speech? In that brief pause, I was able to shove him off me. He landed against the low window frame, directly behind the bed. I lunged at him to shove him out the window. He fell backwards, the hose still in his hand and landed on the ground outside.

Slamming the window shut, I locked it with shaking hands and ran out of the bedroom to the living room where I had a phone attached to the wall. There were no cell phones or battery phones 37 years ago. I dialed 911 and as I rattled off my address to the police dispatcher, the light in my bedroom went out. Now I was in total darkness. I stopped speaking. Nothing. He must be listening too. The door he’d come through from the bedroom was closer to the front door than I was so running for the door was out of the question.

“He’s in the bedroom,” I whispered to the dispatcher. “The light just went out.” I don’t remember breathing. I do remember being frozen with fear.

The dispatcher told me to grab the closest thing to throw at him. “Get ready,” she said.
I picked up a pottery tea pot, something that remains in my grateful care and will never get rid of until I die, and waited. Nothing. Sirens wailed in the distance. I held the teapot behind my shoulder, at the ready but knew I’d always been a poor shot. Nothing.

Soon, there was a knock on my front door. “Police!” they called. With the tea pot I went to the door and verified it was the police. I was safe. For now.

Upon entering my apartment, the three cops investigated the place, including the bedroom, and suggested that the water had shorted my bedroom lamp. The window was still locked. He hadn’t come back in after I heaved him through the window. The police had brought a K-9 officer, a German shepherd, and one of the cops took him around to the back of the house to my bedroom window. The dog caught the scent and tracked the perp several blocks to a busy road where my attacker crossed and the trail was lost.

An hour later, the police had taken my statement and labeled the attack mischief seeing my attacker did little but drench my bedroom and terrify me. At the time, I was young enough and naïve enough to believe them and think I’d taken up enough of their time. When they left my apartment and suggested I keep my windows closed and locked (it was mid-July) I said I would. I remember waving them off, but as they drove out of sight, my terror returned. My attacker was still out there. He might be back.

I grabbed a trench coat, threw it on over my nightgown, locked my door, and started running down the street at 1 a.m., barefoot. Getting as far away as possible seemed like the best idea. He knew where I was, what I looked like, and might still see me as viable prey.
I ran twenty blocks to a friend’s house who was on vacation. She had a key hidden at the back door and I let myself in. For the next few hours I sat with my back against the wall. I turned on the TV and watched the test pattern. In those days programming ended after the late show. No 24-hour TV.

At day break, I returned to my apartment to survey the water damage. My grandmother’s lamp was broken, ruined, the finish on my childhood bedroom suite, damaged too. A vanity mirror had gone down in the struggle and shards littered the bedroom floor.

I cleaned everything up, changed my clothes and wondered how I’d live in my apartment for the next few months, knowing he was still out there. As well as putting a note on my bedroom window to say I had a weapon and was prepared to use it, I locked all windows and put sticks in the sliding part as a precaution. I spent that hot summer in terror, slept with a hammer in my bed, never told my parents who lived on the other side of Canada, and eventually got through it. But when I was out in public I stared down any young man with blonde hair who had that body type as if to say “Was it you because I am not a victim!”
For years, everywhere I went, I could only sit with my back to the wall and wouldn’t tell anyone about not being able to speak properly when I most needed to. That was one of the most mysterious and disappointing parts of the attack. I felt like I’d let myself down with my own terror. When I think of it now, that moment might have saved me. 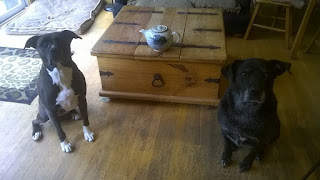 Luckily I didn’t lose the ability to fight back.

I know this is why I have large dogs who bark at the front door. They’ve made me feel safe inside my own house for over thirty years. Maybe this is why I write suspense and why my heroes are women who kick ass, take names, and emerge from incidents like this--stronger and more capable. My heroines don’t wait for the police. They take it upon themselves to make sure they are safe--women who rise up to show what they’re made of. I hope in some small way to inspire women to fight back if ever they need to.

Writing this blog has been cathartic to me. I’ve never put this life event on paper. Doing so encouraged me to tell my husband the whole story after twenty-five years of marriage. When I finished writing this blog I had crushing pain in my chest on the right side, but it went away after a half hour. I know it was the bottled-up memory leaving my body.

Thank you for being a part of this.

Giveaway:
Everyone who comments and leaves an email address that I can reach you, or emails JRS directly gets a copy of Necessary Detour, an Amazon Bestseller, published with Amazon Encore! 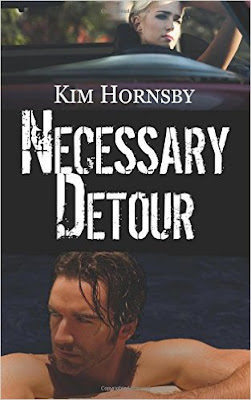 After a stalker's attack, rock star Goldy Crossland flees L.A. for her secluded lake house in Northern Washington. Retired from the music business, she hopes to avoid both the press and her psychotic fan. But obscurity leaves her restless, and when a mysterious--and disturbingly handsome--new neighbor moves in, she can't resist spying. Pete Bayer is undeniably attractive, but Goldy quickly realizes there's something strange going on in the log house across the bay. Is he a member of the paparazzi? Or a much more sinister threat? Despite her suspicions, Goldy can't deny her fascination with him. When the press discovers her hideout, it's Pete who offers an escape route, but it comes with a price. Unwillingly drawn into his dangerous world, Goldy soon learns the reason behind Pete's secrecy--and her crush on her charming neighbor takes a deadly turn.

Kim Hornsby Kim Hornsby is an Amazon Bestselling Author of Suspense who lives in the Seattle area overlooking a pristine tree-lined lake. Motherhood and family-life are at the heart of who she is but Kim has lived enough adventures in her years to transfer her experiences to page for readers to enjoy. She loves it when readers write reviews for her books and is happy to give away her books to those people.
Posted by Maureen A. Miller at 12:30:00 AM