Congratulations to "Trude V.", the winner in Jacki's giveaway. Thank you to all who participated!


Do you know how to read music? If so, take a look at this and tell me if you notice anything unusual about it.

This is known as the BACH motif, which is an example of musical cryptography, a coded system used to create musical note sequences for names or other messages in musical compositions.

I have been intrigued by the idea of using musical scores and passages to encrypt messages for some time and thought it was a great concept for my Code Breakers Regency romantic suspense series. It provided inspiration for my current project, book 4 in the Code Breakers series, A Cantata of Love.

Part of my fascination with this method of ciphering stems from my love of music. I've studied both voice and piano--mainly jazz-- and I appreciate the mathematical complexity of music. Coding a message into a song's musical score or the song lyrics requires a great deal of creativity and presented a tremendous challenge as I plotted the story. While researching period opera singers, such as Mrs. Elizabeth Billington, I discovered that operas were written for singers to show off their voices and allowed for improvisation. That would certainly have made it easy for musicians and performers to send coded messages to specific individuals!

Early examples of musical cryptography include Baroque composers who wove their names or the names of significant individuals into musical selections. The application found popularity with those engaging in espionage, due to the difficulty in breaking musical codes. Other examples of musical coding can be found in the songs of American slaves. Negro spirituals provided a means of communication for those who wanted to escape slavery; references to "going home" or "bound for Canaan" didn't signify death and heaven but heading north to Canada and freedom.

One online website reports a number of "creepy spy radio transmissions" that feature suspected musical clues and/or codes broadcast over shortwave radios. This practice began around the time of WWI and continues today.

A special thank you to my friend and music composer Greg Bartholomew, who shared his expertise with me on this topic. Here is one of his compositions, Baby Blue Roses. When Daisies Pied is an example of a piece of music ladies would have sung during the Regency period; listen here.

Giveaway:
Are there any songs you believe contain a hidden message? Comment for a chance to win an ebook copy of A Cantata of Love when it releases.

Jacki Delecki is a bestselling romantic suspense writer. Delecki’s Grayce Walters Series, which chronicles the adventures of a Seattle animal acupuncturist, was an editor’s selection by USA Today. Delecki’s Romantic Regency The Code Breaker Series hit number one on Amazon. Both acclaimed series are available for purchase at http://www.JackiDelecki.com.
To learn more about Jacki and her books and to be the first to hear about giveaways join her newsletter found on her website. Follow her on FB—Jacki Delecki; Twitter @jackidelecki. 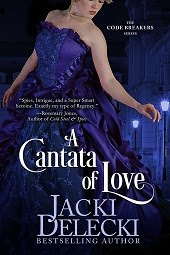 A Cantata of Love, Book 3 in The Code Breakers Regency Romantic Suspense series, releases June 28th. You can pre-order on iBooks.

Napoleonic France is no place for an Englishman, especially Michael Harcourt, the Earl of Kendal, who is on a clandestine assignment for the Crown. Already injured and facing imminent discovery by Napoleon and Fouche’s men, Michael finds his escape made even more perilous when he is charged with the safety of a young boy who must be spirited out of Paris.

Desperate to escape the terrible fate that awaits her if she remains in France, Lady Gabrielle De Valmont must disguise herself as a boy and rely on the cunning of a virtual stranger—an Englishman, no less—to smuggle her out of the country. When the Earl’s injury becomes severely infected, rendering him gravely ill, Gabrielle realizes it is now up to her to save them both.


Giveaway ends 11:59pm EST June 14th. Please supply your email in the post. You may use spaces or full text for security. (ex. jsmith at gmail dot com) If you do not wish to supply your email, or have trouble posting, please email maureen@justromanticsuspense.com with a subject title of JRS GIVEAWAY to be entered in the current giveaway.