Congratulations to "Mary P.", the winner in Isabella's giveaway. Thank you to all who participated!

What would you sacrifice to save a four year old boy? 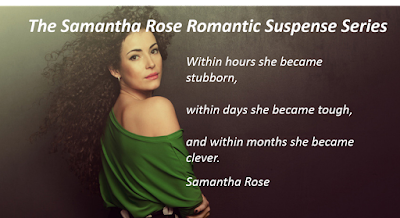 What if the darkness lies?

Darkness lies, smothering the sound we refuse to hear.

Sam is awakened with the sound of a nylon coat rubbing against the wall outside her bedroom. There couldn’t be anyone there, there is never anything in the dark.

The noise was a monster of a man, Robert Walsh, who had been stalking her for months and this night was the night he had imagined for so long.

Darkness lies, cloaking the evil we refuse to believe … as it waits outside the door.

She is tied with copper wire, brutally assaulted and left to die, but is saved by her elderly neighbor, her Sunday afternoon gin partner.

Walsh is imprisoned but escapes two years later, hunting Sam as she flees across the country, trying to become invisible in the huge expanse of Los Angeles.

Sam’s parents intervene from above, dropping heavenly dust on the three men they have chosen to protect and love her. They never expect that the dust will drift over her as well.

Wanting love and stability she is wrenched from what could be a love-filled life to a life that now gives her only one deadly option—to save a four year old boy from the monster.

What if you are seduced by a passion that you never knew was possible?

He leaned over only inches from my face, “Well, well, well. Look what I found. How did Santa know I’d been wanting this in my bed?”

He kissed me. Warmth spread up and down like lightning. I wanted to hold onto that kiss and never let it slip away. The world disappeared around us, and I had never wanted any man as much in my entire hungry life.

What if you are loved by, and love, three powerful, irresistible men?

“Boiler maker.” I thought that’s what wild women drank, just to get warmed up.

“Pardon me,” the man in overalls stood and I thought he might bump his head on the ceiling.

“Perhaps you’d allow me to buy you a drink.”

Why not? That’s what wild women did. Probably.

“Unusual to see a pretty woman in here this early. I’m just getting off'a work. Work at the studio, once in a while I get a part for a tall guy. I was a Wookie.”

I took another drink, feeling relaxed then told him why I was drunk at ten in the morning, reasoning that a Wookie would know about life. Larry the bartender brought another round. I had lost count of how many.

“… You see, I love three men, they all love me—which is really nice to be loved—just like I love you guys,” I hugged them both, “but Jack, Jack is so volcanic hot, and Fritz wants to buy me a castle and make babies, and David’s just so sweet and caring and I don’t know what to do…”

And what if you are finally believing that the life you’ve always wanted is within your grasp… but you must accept the only decision that you can make, to do anything to save a four year old boy?

The first step was the hardest.

I stepped up two, nine more to go.

Thirty seconds and I could be dead.

Twenty seconds and I could be dead.

Two more steps. I listened, wondering if I could hear Robert, if I could perceive his breaths or heart beats.

Ten seconds and I could be dead.

I closed my eyes just before I touched the doorknob and pictured Jack again, of the memories we had yet to create. 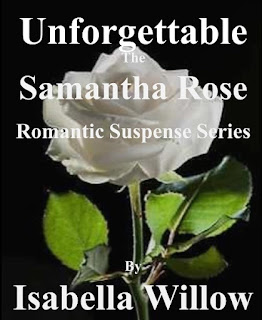 Giveaway:
Comment about the “what if’s”-- what would you do to save a four year old boy-- and enter a contest to win a free copy of Unforgettable and a $25 Gift Card.

Sign up to win free books and be the first to know all the Isabella Willow news, book launches, and more. 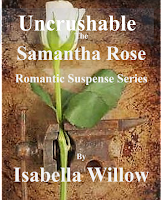 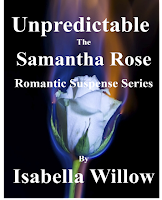 Keep in touch to receive more free offers and be the first to hear the news. Uncrushable, Second in the Series is launching summer 2016, followed by the third book, Unpredictable in fall of 2016. Isabella Willow

Yes, I would like to sign up to win a free copy of Uncrushable when it’s released.

And, Yes, I would like to sign up to win a free copy of Unpredictable when it’s released.

Giveaway ends 11:59pm EST June 4th. Please supply your email in the post. You may use spaces or full text for security. (ex. jsmith at gmail dot com) If you do not wish to supply your email, or have trouble posting, please email maureen@justromanticsuspense.com with a subject title of JRS GIVEAWAY to be entered in the current giveaway.