Romantic suspense is a hard nut to crack. Both the romance and the suspense have to work – in tandem! – no easy task for a writer, juggling both simultaneously. But when it works, it’s a beautiful thing. Let’s take a look at five of my all-time favorites.

Out of Sight
Any romantic liaison that begins with the two main characters stuffed inside the trunk of a car is bound to get my attention, especially when one of them is played by George Clooney. This story grabs you and doesn’t let go – it’s funny and sexy, with a whiff of danger. The chemistry between J.Lo and G.Cloo is off the charts.

Moonlighting (TV series)
I’m going back a ways here – Moonlighting aired from 1985-89 – but this show was inspired and beautifully cast. The writers seemed intent on mashing up 1930s screwball comedy with detective procedurals every week, and leads Bruce Willis and Cybill Shepherd somehow made it work.

Witness
Who’d have thought that a movie about Harrison Ford-among-the-Amish could be this awesome? Ford and co-star Kelly McGillis have major onscreen chemistry, and the tension (sexual and otherwise) just keeps escalating. Bonus: Viggo Mortensen makes a brief appearance!


Drive
It is a truth universally acknowledged that Ryan Gosling + Carey Mulligan = AMAZING. This movie has a deceptively simple crime-thriller plot – it’s the characters that make you want to watch it over and over again. Gosling’s character doesn’t even have an official name but he won me over with his nuanced performance. And as for Mulligan, I’m pretty sure I’d pay to watch her read the phone book.


Body Heat
Kathleen Turner and William Hurt show us how it’s done in this classic scorcher. Sex, lies, murder, and plot twists – not to mention killer dialogue – make it a must-see for anyone who enjoys this genre. 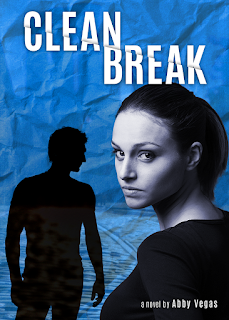 Abby Vegas’s new romantic suspense novel, Clean Break, is the story of Lane Haviland – a feisty, flawed heroine who’s barely functioning as an adult. Lane’s apartment is a six-by-nine cell in a Brooklyn basement and her new boss hasn’t ever met a personal or professional boundary she can’t bulldoze through. And to top it all off, Lane’s developing a life-threatening crush on her mysterious and darkly handsome handyman, Viktor, who may or may not be involved with the Russian mafia. What could possibly go wrong?