The Inspiration Behind Wild Within 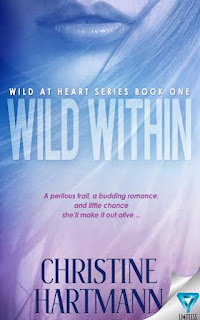 A year after a family tragedy, Grace Mori embarks on the journey of a lifetime…

Two thousand, six hundred miles of blistering heat, wilderness, and soul searching—that’s what Grace signed up for when she decided to hike the Pacific Crest Trail. It’s not a voyage for beginners, but with no husband and her family still recovering from her bother’s death, Grace is more alone than ever.

This trail meant something to her brother, and she’ll hike it in his memory, but she can’t do it alone. So with her brother’s gear and a small group, Grace takes the most important first steps of her life.

Grace finds something more than peace and magic on the trail…

When her first day of hiking ends in heat stroke, Grace is rescued by a handsome, red-haired hiker who calls himself Lone Star. Grace has an immediate connection with him, and their brief encounter leaves her fearing her soul mate has slipped through her fingers. Although he vows to keep in touch, Grace doubts she’ll ever see him again.

When fears become reality, the only people Grace can rely on may be killers...

Grace is surprised to find notes left at supply posts along the trail. Lone Star’s eloquent letters keep Grace going, clinging to the hope she’ll find him—and happiness—at the end of her journey. But as the trail becomes more perilous, menace grows within the group. And when Lone Star’s letters mysteriously stop coming, Grace fears the worst.


As tensions flare and a killer emerges, Grace must battle to survive…and reunite with the man she’s sure is her future.

Later, after sharing a hearty dinner with the RV couple, Lone Star and Grace pitched their tents in adjacent campsites. For Grace, tent poles went into wrong grommets, stakes came loose, and clips misaligned. Lone Star set his up in a flash and sat in the entrance, watching her struggle.
“I wouldn’t mind a little help here, if you’ve got the time.”
“I’ve got the time. But you have to learn this for yourself, darlin’. Soon it’ll be as easy as pie. But not if I do it for you. Besides, I enjoy watching you. You clean up real nice.”
“Thanks.” Grace curtsied. Her foot caught in a tent line and she fell. Lone Star chuckled so long he had to hold his sides.
“From where I’m sitting, Lone Star, you’re not living up to Southern gentleman standards.” She brushed herself off. “What’s the Texas expression for go jump in a lake?”
“What I think you’re trying to say is that you think I’m about as fine as cream gravy.”
Grace used a rock to pound in her final tent stake and attached its guy-line. “Yes, that’s what I meant.” She tossed a pine cone at his head. “You’re as fine as clean gravy. So is my tent. Not bad for a first try.”
“Not clean gravy. Cream gravy. And it’s a fine tent indeed.”
Once inside her shelter, Grace was too tired to crawl into her sleeping bag. She pulled it over her like a blanket, thought for a second of Lone Star’s blue eyes, and fell asleep before the cover reached her chin.
Cheerful whistling roused her when dawn was still a light orange glow on the horizon. She pushed the tent flap aside and made out Lone Star breaking camp.
“Didn’t mean to wake you, darlin’.”
“You’re leaving? Already?” Sudden anxiety prickled in her.
“Sure am. Today’s supposed to be cooler, they say. Still, it’s good to start early in the desert, no matter what the prediction.”
“Wait.” Grace scrambled out. “I can pack up and go with you. Quick as a caterpillar in heat. Or whatever you’d say.” She wrapped her arms around herself to keep warm in the crisp morning air.
Lone Star’s face shone with affection. “Just Grace, your coming with me is a sweet thought.” He took gentle hold of her shoulders and turned her around. “But you crawl right back in your bag. You’re staying put today.”
Her attention focused on his hands as he gently pushed her toward her tent. Warm, firm, comforting hands. A sudden longing enveloped her. She struggled out of his grip. “I don’t need any more rest. I’m fine.”
“You don’t know how tired you are.”
“I’m okay. Really.” She jumped up and down. “See?”
“No arguing.” He again ushered her to the tent and waited until she was tightly wrapped and zippered inside. His thighs appeared at the entrance as he folded his long body until his head was level with his knees.
“I loved hiking with you yesterday, Just Grace. My heart is saying stay here with you. But I’ve got 2,600 miles to hike before snow lands in Canada. And my law practice isn’t going to be there forever if I don’t get back to it as soon as I can. I’ve just got to skedaddle.”
He cares more about his work than he does about me.
She fought back tears and willed her voice not to crack. “Okay. I understand. You’ve got your…priorities.”
Lone Star reached for her chin but she jerked it away.
He let his hand drop. “Don’t be that way, Just Grace. You’ve got to have a little faith.”
“Faith in what?”
“Faith in us.” He rubbed his hand against her cheek. This time she leaned into it.
“There’s an us?” 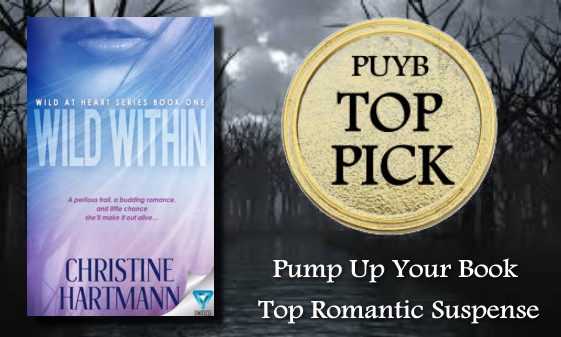 Christine Hartmann grew up in Ohio and Delaware and loves traveling to exotic, romantic settings. After a college semester in Kathmandu, her first three “real” jobs were all in northern Japan, where she lived for almost 10 years. She currently splits her career between her daytime occupation (improving the quality of veterans’ nursing home care) and her nights/weekend avocation (writing both fiction and non-fiction books). Her husband Ron Strickland is a well-known long-distance hiker and trail guide writer and the founder of the 1,200-mile Pacific Northwest National Scenic Trail. Christine loves reading, pilates, bicycling, and snorkeling, and health foods that taste like they’re bad for you. You will often find her at a keyboard, a German shepherd at her side, and Ron whispering sweet edits over her shoulder.

Her latest book is book one of the Wild at Heart searies, Wild Within.

Christine is giving away 2 $25 Amazon Gift Cards and 20 Wild Within Coffee Mugs!
Terms and Conditions:
• By entering the giveaway, you are confirming you are at least 18 years old.
• Two winners will be chosen via Rafflecopter to receive one $25 Amazon Gift Card & twenty winners will be chosen to receive one Wild Within Coffee Mug
• This giveaway starts April 4 and ends June 30
• Winner will be contacted via email on July 1.
• Winner has 48 hours to reply.
Good luck everyone!
ENTER TO WIN!