Congratulations to "Joan V.", the winner in Jacki's giveaway. Thank you to all who participated! 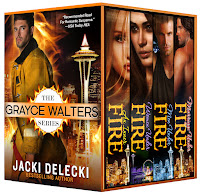 James – Grayce’s gay, cross-dressing best friend and karate master who can take bad guys down as long as he doesn’t ruin his hair

Hunter Hines – U.S. Marine whose life was dedicated to fighting terrorism…until he fell in love and discovered there’s more to life than duty

Although they are fictional, I’ve gotten well acquainted with Grayce and her unconventional crime-fighting accomplices over the course of four books—so much so that they make daily appearances in my life. When shopping, I often wonder if James would approve of my fashion choices. While dressing for a night on the town, I think how envious Grayce would be of my new strappy high heels. When leading children’s tours through Pike Place Market, I imagine waving to Hollie and Nick, out walking Talley.

I think that’s the appeal of series. Spending time with the same characters again and again allows readers—and authors—to develop a unique kind of relationship with them. Although they exist only on paper, they come alive in our imaginations and hearts. 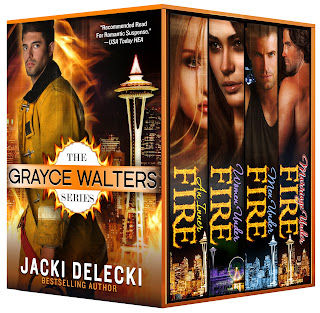 You can meet the entire cast of characters in The Grayce Walters Romantic Suspense Series box set, now available at online retailers. This four-book collection includes An Inner Fire, Women Under Fire, Men Under Fire and Marriage Under Fire.

Giveaway:
For a chance to win a $10 Amazon gift card, share a few of your favorite fictional friends. Just leave a comment with the character’s name and the series, in case other readers want to “meet” them!


Jacki Delecki is a bestselling romantic suspense writer. Delecki’s Grayce Walters series, which chronicles the adventures of a Seattle animal acupuncturist, was an editor’s selection by USA Today. The Code Breakers, Delecki’s Regency romantic suspense series, hit number one on Amazon. Both acclaimed series are available for purchase at http://www.JackiDelecki.com. To learn more about Jacki and her books and to be the first to hear about giveaways visit her website where you can sign up for her newsletter. Follow her on FB—Jacki Delecki; Twitter @jackidelecki.


Giveaway ends 11:59pm EST May 10th. Please supply your email in the post. You may use spaces or full text for security. (ex. jsmith at gmail dot com) If you do not wish to supply your email, or have trouble posting, please email maureen@justromanticsuspense.com with a subject title of JRS GIVEAWAY to be entered in the current giveaway.