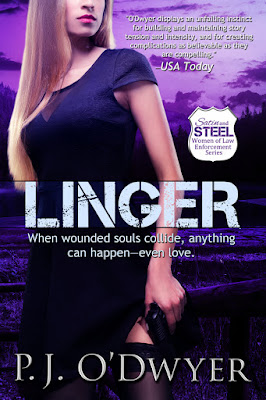 Maryland State Police counter-sniper Brit Gentry took that fatal shot. Only she doesn’t remember pulling the trigger. Now after a psych evaluation and being placed on administrative leave while the brass investigates, Brit’s packing it up.

If there’s one place where she can make sense of what happened, it would be in the mountains of western Maryland and the solitude of her cabin on Deep Creek Lake—drama can take a hike.

Too bad someone didn’t tell escaped convict Pride Rivers to stay clear of one on-the-edge cop in designer heels. It was no accident this ex–Army Ranger commandeered Brit Gentry and her Pathfinder on Interstate 68. The wife of his double-crossing Army Ranger comrade is the mother of all bargaining chips. But first he'll have to use her to flush him out.

Being a fugitive on the run makes recon difficult, and Pride’s unaware his gorgeous, brown-eyed captive is trained to kill. And it’s Brit’s mission to keep him in the dark—her life depends on it. But when hidden agendas are exposed, they are surprised to find they were betrayed by the same man.


When wounded souls collide, anything can happen—even love. But first they’ll need each other to survive.

“You’re making me soft, Brit. Home cooked meals, a warm bed, amenities out the ass.”
Her mouth fell open with an irritated breath. “You didn’t give me a choice.”
“I am now.” He pulled her into his arms. “I can’t stay. You and I both know it. That crazy voodoo magic we tried back there, even if it works, won’t come soon enough. It could take months, if not years, for something to shake loose in that pretty head of yours.”
Head? Jeez. She still hadn’t removed her cap. Brit reached up and casually tugged it off, grimacing when it pulled her hair. But the pain wasn’t as acute as her racing heart. He wasn’t saying anything she hadn’t already agonized over. “Will you stay the night?”
He rubbed her arms, the warmth of his hands sinking into her cold skin. “Only if you promise to relax and eat dinner with me like a normal couple.”
“Couple?” She cocked her head.
He chuckled. “We’re not normal.”
It wasn’t the word “normal” she’d clung to. “I need to pop in those rolls.”
“It’s done. I’m only waiting on you.” Colt grabbed her sweats and handed them to her. “Not that I’m not digging the string bikini, but it’s near freezing.”
“Ah . . . right.” She was tongue-tied and nervous and scared. More so for him. She wrapped the towel around her. “I’ll change in the powder room.”
“The one off the solarium?”
“Yeah,” she said a little breathless and grabbed her bag, shoving her cap and goggles inside. “You go first, and I’ll handle the door.” She gave him a knowing smile.
“I’m not a mental case.”
It was called denial. PTSD didn’t make him any less of a man. If anything, it only proved his bravery. In this day and age, the military wasn’t your average American male’s vocation. She knew a thing or two about the unknown lurking behind a door. It had to be similar, if not more frightening, in a foreign land.
“I didn’t say you were.” She tightened her grip on the towel and opened the door. “Gotta be quick.”
Colt leapt over the threshold. Brit was on his heels and slammed the door shut. Holding open the other one, Colt motioned her through, into the hallway that led to a sitting area and the two bedrooms off the solarium.
Brit entered the powder room off to the side and turned on the light. “I’ll meet you in the foyer below.” She shut the door, ripped off her wet suit, and stared at her reflection.
What am I thinking?

She wanted him. He was leaving. She’d never see him again. All the wrong reasons to have sex with him. The heat crept into her face, and she threw on her clothes, slipped on her clogs, and tried with desperation to get him out of her head.
Stupid. He’s right down the stairs.
She opened the door and growled.
“You okay?” Colt called from below.
“Fine,” she snapped and took the steps, meeting him in the foyer.
“Nice movie theater.” He hooked his chin toward the open door on the right. “Don’t suppose you have cable in there.”
“No.” It came out clipped. “I mean it’s only set up to show DVDs.”
Holy shit! She’d forgotten about the theater. Relax. He couldn’t tell from looking at the setup it was equipped with working cable.
“I haven’t been to a movie since . . .” He chuckled. “This is embarrassing. I don’t remember.”
She took his arm and led him to the front door, facing the main house. “Then we can watch one tonight.”
He opened it and ushered her out. “What movies do you like?”
She laughed. “War movies.”
“No kidding.” He shut the door and leaned into her with his shoulder like she was his buddy or something. “I think I’d rather enjoy that hot tub facing the lake for my last night. If you’ll join me.”

AUTHOR BIO:
P. J. O’Dwyer is an award-winning author and an active member of Romance Writers of America. When asked where she gets her story ideas, she laughs ruefully and says, “It helps being married to a cop.” She lives in Maryland with her family.

GIVEAWAY ON RAFFLECOPTER LINK: WIN ONE OF TWO FREE AUTOGRAPHED COPIES OF LINGER