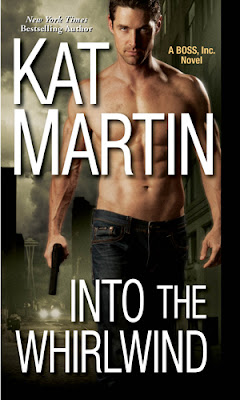 A bodyguard, a bounty hunter, a private investigator, no one can handle the heat like the men of BOSS, Inc.

Megan O'Brien is at her wit's end. Her three-year-old son has been kidnapped. No police, says the ransom demand. Fearing for her son's life, Meg has no choice but to turn to her former bodyguard, Dirk Reynolds.
Dirk's never forgiven Meg for the way she left him after their brief affair. But with bounty hunter Luke Brodie on his side, Dirk knows he's got to help Meg rescue her son.

The few clues they've gathered send them spiraling into a murky world of high-stakes gambling and international crime. Meg may be way out of her depths, but she's seeing a side of Dirk she never suspected–one no woman could possibly resist.

It didn't matter.  Nothing mattered, but saving the life of her son. 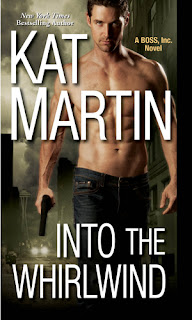 About Kat:
New York Times bestselling author Kat Martin is a graduate of the University of California at Santa Barbara where she majored in Anthropology and also studied History.   She is married to L.J. Martin, author of western, non-fiction, and suspense novels.
Kat has written more than sixty-five novels.  Sixteen million copies of her books are in print and she has been published in twenty foreign countries, including Japan, France, Germany, Argentina, Greece, China, Russia, and Spain.

Born in Bakersfield, California, Kat currently resides in Missoula, Montana, on a small ranch in the beautiful Sapphire mountains.

Her last 10 books have hit the prestigious New York Times bestseller list.  AGAINST THE WILD, AGAINST THE SKY, AGAINST THE TIDE and INTO THE FURY her latest release, took top ten spots.

Giveaway:
To CELEBRATE the release of INTO THE WHIRLWIND, enter my new contest for a chance to win a KINDLE FIRE and 3 of my books!! Prize will be mailed in JULY. US Only. Enter at www.KatMartin.com