Congratulations to "Mary P.", the winner in Terry's giveaway. Thank you to all who participated!

I'm excited to be back with news about my new Triple-D Ranch series. Book 2, In Deep Trouble has made its way into the world. This one follows Bryce and Cecily, both introduced in the first book, In Hot Water.

Setting a series on a cattle ranch has had its challenges. For one, I might live in rural Colorado, but I've had zero experience with cattle ranching. But, one of the fun parts of writing for me is the research, and I've always found people are more than happy to help make sure you get it right. Most of the time, I come to a spot in the story where I realize I need more specialized information. But for this book, I needed to throw some "bad stuff" at the cowboys, and what could be worse for a cattle rancher than to have someone after his animals. Imagine my surprise when I discovered that mysterious cattle deaths were a big story in Colorado years ago, with claims that aliens were doing the killing. Of course, I couldn't pass up that piece of reality, and I had to go back and weave in those tales. (For the record, it's still a mystery as to how and why those cattle were killed). And, while talking to people is good, hands-on research is always better. To that end, I've booked a week as a guest at a cattle ranch later this month. Wish me luck! 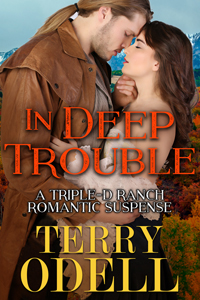 She trusts everyone. He trusts no one.

In her job as a Sheriff’s Department Dispatcher, Cecily Cooper sees plenty of people who could use a second chance. She’s created a program to give the less advantaged a fresh start, and thinks her brother’s Colorado cattle ranch will be the perfect spot for her project. Some responsibility and a touch of physical labor will help these people find an alternative to life on the streets.

When seventeen-year-old Grady Fenton is chosen as the first candidate for Cecily’s program, Cecily is thrilled. Bryce not so much, especially when his boss assigns him to be Grady’s mentor. Can Bryce convince Cecily there’s more to Grady than typical teenage angst? Or is he reading more into the boy’s behavior than is really there? When someone is killing cattle across the state, the Triple-D’s herd is no exception. Does Grady have answers? Sparks fly when Bryce and Cecily must put aside their differences long enough to discover what Grady is hiding. Soon things escalate, and it’s not just the cattle in danger.

“I swear, that horse understands everything you say.” Cecily smoothed her skirt and took a couple steps toward him.

“Why wouldn’t she?” Bryce said. “We’ve got a good relationship.” Better than his and Cecily’s, for sure.

She moved another step closer. Her brown eyes sparkled. “I’m glad you’ll be working with Grady. He’s not a bad kid, just had some rough spots.”

He grabbed his ponytail and flipped it behind him. “Haven’t we all,” he muttered. Right now, dealing with this inexperienced kid was a pothole in Bryce’s road. Being tied up doing the one-on-one thing with Grady meant Derek would be a man short. “You gonna fill in for me working cattle?” he said, a touch of sarcasm leaking through his tone.

“You know I would, but I don’t have enough vacation days.”

Ultimately Derek was the one to decide if he needed to hire an extra hand. Since he’d given in to Cecily on bringing Grady to the ranch, Bryce would have to deal.

“It won’t be so bad,” Cecily said. “He knows the consequences of not pulling his weight, not following orders.” She cast him her puppy-dog eyes. “Don’t tell me you won’t be the tiniest bit glad to have someone else mucking out stalls and pitching hay.” She held her thumb and index finger about half an inch apart.

He shrugged. Kid was way too scrawny, but between doing the chores Cecily had mentioned—and a few more—plus Tanya’s cooking, he’d get some meat on his bones soon enough. A knot in Bryce’s gut loosened. Cecily seemed to understand Grady wasn’t going to be out with the cattle where the potential for screwing things up was far greater than from shoveling manure. 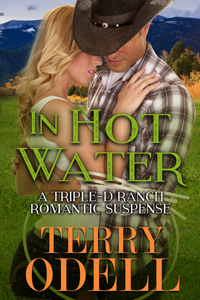 She closed the distance between them. Put a hand on his arm. Did that damn puppy-dog thing with her big, brown eyes again. His heart did another roll.

Giveaway:
One commenter will win a download of In Hot Water, Book 1 in the Triple-D Ranch series. This giveaway will run through Friday May 13th!


Giveaway ends 11:59pm EST May 13th. Please supply your email in the post. You may use spaces or full text for security. (ex. jsmith at gmail dot com) If you do not wish to supply your email, or have trouble posting, please email maureen@justromanticsuspense.com with a subject title of JRS GIVEAWAY to be entered in the current giveaway.
Posted by Maureen A. Miller at 12:30:00 AM