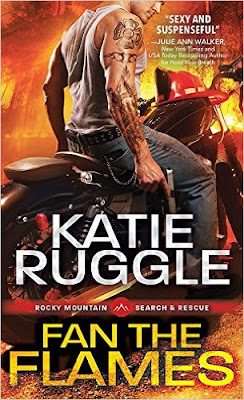 In the remote Rocky Mountains, lives depend on the Search and Rescue brotherhood. But in a place this far off the map, trust is hard to come by and secrets can be murder…

As a Motorcycle Club member and firefighter, Ian Walsh is used to riding the line between the good guys and the bad. He may owe the Club his life, but his heart rests with his fire station brothers…and with the girl he’s loved since they were kids, Rory Sorenson. Ian would do anything for Rory. He’d die for her. Kill for her. Defend her to his last breath—and he may just have to.

Every con in the Rockies knows Rory is the go-to girl for less-than-legal firearms, and for the past few years, she’s managed to keep the peace between dangerous factions by remaining strictly neutral. But when she defends herself against a brutal attack, Rory finds herself catapulted into the center of a Motorcycle Club war—with only Ian standing between her and a threat greater than either of them could have imagined.

Search and Rescue:
On His Watch (novella)
Hold Your Breath
Fan the Flames
Gone too Deep
In Safe Hands

He eyed her for a long moment, and she was worried that her distraction hadn’t worked. After a long silence, he finally spoke—although about a completely random topic. “I remember seeing you for the first time at the grocery store when we were kids.”

That first meeting had been seared into her brain for over a decade. “It was my birthday.”
He smiled. “You were just a tiny thing, like ten or something, and you were staring at this bakery display with huge eyes. From the look on your face, you’d have thought those cakes were magical.”

Rory started to smile. “My parents hated going to the store. Everything we ate or wore was either homemade or grown or raised or traded with a neighbor. My mom loved Colorado peaches, though, and Harry, the guy who usually had the roadside stand—remember him?” Ian nodded. “He never showed up that day, but the grocery store was carrying those peaches. My mom’s code of ethics didn’t hold up to her craving. It was the first time I remember being in there, and those princess birthday cakes were so pretty. I asked my mom for one, and she acted like I’d asked for a sealskin coat lined with the fur of innocent puppies. Instead of a cake, I got a lecture on corporate greed and rampant consumerism. I didn’t care about any of that, though. I just really, really wanted a pink-and-white cake for my birthday.”

He laughed. “I could tell.”

“I saw you watching,” she admitted, remembering noticing that beautiful boy and being so ashamed. She’d been the weird, oddly dressed kid, and he’d been gorgeous, even as a gawky fourteen-year-old. “And then, in the parking lot…”

With a bashful shrug that looked strange on him, he said, “I wanted to get you a big cake but I didn’t have enough money. I’d just bought a part for a bike Julius was helping me fix up.”

“The cupcake was perfect.”

It had been. She remembered every second of that encounter, from him touching her arm while her mother was talking to a neighbor, to the detail of the pink and white frosting hearts on the cupcake in his hand. He’d held it out to her with an awkward, “Happy Birthday.” As soon as she’d accepted it, he’d hurried away, leaving her staring at his departing back. That was the start of a thirteen-year crush.

“I was older than ten, though,” she said, shaking off the nostalgia that wanted to cling. “I’d just turned twelve.”

“Even as a kid, you were so pretty.” Reaching over, he caught a few pieces of her hair between his fingers, running the full length of the strands until they slipped out of his hand and dropped across her shoulder. “Still are.”

She’d been too shocked to move away from his touch, and now she could only stare at him, not sure what to say. Rory had always figured she was attractive enough, but nothing special—straight, light brown hair and muted blue eyes. The way Ian was looking at her, though, made her feel more than just average. Much more. 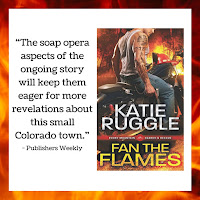 But…what was he doing? What was he trying to say?

And what the hell had brought it on? The attempted break-in? Something else? Rory was barely equipped to deal with Ian on normal days. She had no idea how to respond to the look in his eyes.

“Ever since that first time I saw you, I’ve tried to get your attention.” The twist of his mouth was wry. “Never had much luck with that. Hell—heck, even that cupcake held your interest more than I did.”

Her mouth was open, but no words emerged. Rory couldn’t wrap her head around the idea that gorgeous Ian Walsh, whom she’d crushed on forever, was seriously attracted to her. Sure, he’d flirted, but she assumed that was just his way. He was perfection, and she was just average—and weirdly hermit-like, to boot. Now, though, he was calling her pretty, touching her hair, and acting like someone who was interested—romantically interested.

As it started to sink into her brain, she closed her mouth and frowned.

“What does that look”—his finger made a circle in the air, indicating her face—“mean?”

She shifted back a step, stopping only because she bumped into the counter. “It means that I have a lot going on here. The shop, the back room”—she gave him a meaningful look—“dealing with certain customers—including your family.”

“Yeah? So?” His forehead was still wrinkled in confusion.

“So, you split your time between hanging out with criminals and working with cops.”

Ian leaned against the wall and crossed his arms. “I wouldn’t drag you into anything. Besides, the Riders aren’t involved in anything illegal—anything serious, at least.”

“Ian. Billy just walked out of here with an untraceable rifle. Is that so he can use that gun for hunting, to keep the mule deer’s family from tracking him down and getting revenge on him for shooting their loved one?”

“You just sold it to him!” His voice rose.

“I know.” Tucking her hands into the back pockets of her jeans, she moved her gaze around the shop, focusing on anything except for the man standing a few feet away from her.

“That’s my point. Most of the money I make is in there.” Rory jerked her head at the door to the back room. “I don’t want to get in any deeper than I already am. And I definitely don’t want to attract any attention from law enforcement. Right now, the cops pretty much leave me alone. I’d like that to continue.”

As he stared at her, his expression changed to something closer to thoughtfulness.

“What?” she finally snapped, not able to take the charged silence for another minute.

About Katie Ruggle:
When she’s not writing, Katie Ruggle rides horses, shoots guns, and travels to warm places where she can SCUBA dive. Graduating from the Police Academy, Katie received her ice-rescue certification and can attest that the reservoirs in the Colorado mountains really are that cold. While she still misses her off-grid, solar- and wind-powered house in the Rocky Mountains, she now lives in Rochester, Minnesota near her family. Katie Ruggle: http://katieruggle.com/