The End of True Lies. Or Is It?

Writing the end of a trilogy is bittersweet to me. The True Lies series follows the stories of three women who find that their destiny is far better than anything they could have imagined for themselves. Inside their world, no one is who they seem and the bad guys just might be good after all.

The final book True Peril begins in the jungles of Columbia. Trista Patterson turns her back on her life of privilege and dedicates herself to helping others. Her mission to protect the world's children takes her into the bleak and violent underbelly of third world conflicts. She rescues a young girl from being kidnapped, only to become the victim herself. After escaping, she finds herself running for her life, as she's placed at the top of a drug cartel's most wanted list.

Dane O'Brien has spent his life in the shadows as a lethal assassin. To save his soul, he trades his gun for corporate politics and becomes an undercover operative for the CIA. But when visiting his humanitarian sister turns deadly, Dane finds himself swearing to protect her friend Trista no matter the cost...even if it means stepping back into the world he swore never to return to. Although falling for the tough-hearted Trista is easy, keeping her alive is hard.

I’d love to revisit the world of Simon Dunn and Dane O’Brien. They have a whole crew of men, waiting for their chance to find their heroine, especially the leader of the South American team who seemed quite interested in Dane’s sister Jenny. Dating the boss’s sister? Probably not a good idea. 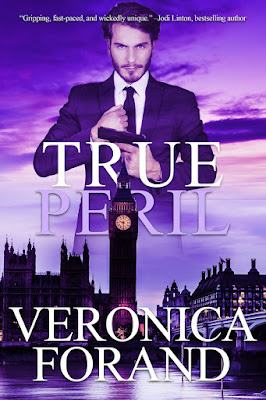 TRUE PERIL by VERONICA FORAND
Dive into the world of drug cartels and assassins in this thrilling conclusion to Veronica Forand’s True Lies series in TRUE PERIL.

Socialite Trista Patterson has turned her back on her life of privilege and dedicated herself to helping others. Her mission to protect the world’s children often takes her into the bleak and violent underbelly of third world countries. When a kidnapping attempt goes wrong, Trista quickly finds herself running for her life...and married to a man she just met...as she’s placed at the top of the Cartel’s most wanted list.

Dane O’Brien has spent his life in the shadows. Once a lethal assassin he grew tired of losing his soul with every hit, trading his gun and missions for a conference table and office politics as an undercover operative for the CIA. But when visiting his humanitarian sister turns deadly, Dane finds himself swearing to protect her beautiful and passionate friend Trista no matter the cost...even if it means stepping back into the world he swore never to return to. Although falling for the tough-hearted Trista is easy, keeping her alive is hard.

Get a Sneak Peek at True Peril!
Copyright © 2016 by Veronica Forand

“Trista?” he called out through the trees.

He called to her several more times and then started back to his car to gather supplies to hike a mile or two farther to try to find more evidence of her presence. The swish of a branch behind him caught his attention. Whoever was hiding had emerged.

Relief turned to caution as Trista walked out of the jungle with a layer of mud covering her and a handgun aimed at his head.

She didn’t speak. Her eyes remained focused on him, and her legs seemed poised to take off at the slightest threat.

Hovering in the area between the road and the forest, she shook her head. “You’re Jenny’s brother?”

Her voice sounded stronger than her faltering body appeared. Some of the mud that covered her looked more like blood that had dried on her shirtsleeves and part of her pants.

“What’s Jenny’s middle name?” Her eyebrows furrowed as they had in the pictures.

She took a tentative step forward. She observed Dane’s movements and fixed her eyes on his like a panther ready to pounce. “What’s her favorite drink?”

“Chocolate milkshakes. Or a margarita if the bar carries fresh limes.”

The tension in her face melted away. She pointed the gun to the ground and walked over to him. His arms opened automatically—after all, the woman had been through hell. She probably needed a hug or a shoulder to cry on.

She crossed her arms over her chest, the gun dangling from her hand. Her breathing pattern switched from a heavy sigh to a shivery exhale. He put his arms down and observed her.

“Let me rephrase. Do you need medical attention?”

“Where are the men who took you from the village?”

She nodded. Her gaze dropped to the ground. Most people never recovered from such a nightmare. Yet she’d not only lived through the ordeal, she emerged from the jungle healthy and armed.

He’d placed the odds against her, but now that he saw her in person, he’d have changed his bet. He approached her with caution. Her finger rested just outside the trigger, in a position a skilled shooter would feel comfortable with.

She peered up at him. “I’m glad you’re here. I didn’t know how I’d get down from the mountain. Is Jenny all right?”

“I don’t know anything about her, except she’s probably alive thanks to you. Did they hurt you?” He placed a calming hand on her shoulder and slipped the gun out of her hand.

“No.” She eyed the weapon, but didn’t reach for it. Not that she’d be capable of taking it back from him.

“I’ve been listening to the group’s radio all night. They’re coming back. For me.” A tear rolled down her cheek. She ignored it and looked toward the hut. “I didn’t mean to kill them.”

“Kill or be killed.” He urged her toward the Land Cruiser with a soft hand still on her shoulder, trying to ease the wretched emotions that would brand her view of the world forever—the same emotions that tortured his soul every night. “You survived a kidnapping by two moronic men. Don’t feel guilty.”

“You’d have killed them?”

More than killed them. That’s why he hid away in an office now. If anyone had threatened to rape a young girl in his presence, he would have flayed their skin and stuffed it down their throats before ripping their hearts out. “I wouldn’t have been as merciful as you.”
Other Romantic Suspense by Veronica Forand 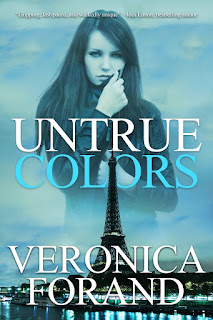 She's on the run... Brilliant art appraiser Alex Northrop's ex used stolen art to fund his nefarious activities. Now he wants her dead. But it isn't just herself she's worried about - if he discovers who she really is, he'll kill her family.

Professor Henry Chilton is shocked to find a beautiful stranger passed out in his bed, and even more so when she reveals a priceless painting is a forgery - the painting he'd planned to use to fund a woman's shelter. She's mysterious and frightened, and he is determined to discover why.

Alex's knowledge of art is undeniable--just as Henry's attraction to her is irresistible. But in order to help him recover the real painting, Alex isn't just risking exposure...she's risking her life. 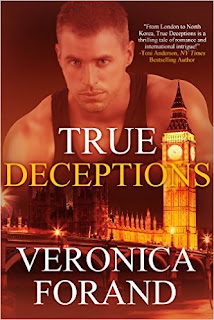 After his partner was murdered, Simon Dunn was finished with MI6. But the cold, violent world of British intelligence never lets anyone go free. Now Simon has been blackmailed into a new job...with a beautiful new partner who's going to get them both killed.

Robotics expert Cassie Watson is a newbie field agent with as much sophistication as...well, a pacifist, vegan computer nerd. Now she's abruptly thrust into the cutthroat world of espionage with a partner who is as cold as he is brutally—and brutishly—handsome.

But when their mission is betrayed from the inside, Cassie will be forced to place her life in the hands of the one man who's anything but trustworthy...

A Bostonian by birth, Veronica Forand regrettably lost her Boston accent while moving from state to state and country to country. Cleveland probably had the most profound effect on her ability to pronounce the “r” in the word “park.”

She does try to return now and then to visit family and eat long neck clams and lobster. Summers on Cape Cod are also high on the priority list.

Her experience in crime involves time as a court appointed attorney. Eventually, she switched fields to where bigger crimes take place, corporate tax. The allure of spending mornings in her pajamas homeschooling her children and writing fascinating fiction caused her to change careers again. Now that the kids are out of the house (in school), she writes romantic thrillers by day and is the perfect wife and mother at night.

Her experience in romance is limited to one man. Luckily, he’s still finding ways to charm her by taking her on vacations to the south of France, Fiji, and the Green Mountains when time is short. Avid travelers, they love to roam with their kids across continents in pursuit of skiing, scuba diving, and the perfect piece of chocolate.

She’s lived in London, Paris, Geneva, Washington D.C., and the accent destroying city of Cleveland. She currently resides near Philadelphia.

Her books are published by Entangled Publishing, Boroughs Publishing Group, and The Wild Rose Press.