Taken By The Earl

I think Spring has finally arrived! The daffodils are out, the weather is improving—slowly. I love the Spring, when everything comes back to life for another year, and the night’s finally start staying light longer. It was a really busy Easter weekend in our house, with most of our family arriving on the Saturday. 5 of our 6 sons, our two daughter-in-law, and three grandchildren. The Easter Egg Hunt was especially fun this year, kept kids entertained for hours.

April 2nd is release day of Taken by the Earl (Regency Unlaced 3). Fliss, the heroine of this Regency suspense story, overhears a conversation in which two people, a man and a woman, discuss killing Sinclair Montgomery, the Earl of Winterbourne. She has no idea why, or when the murder is to take place, all she does know is that she has to find the earl and warn him he’s in danger. Finding the earl isn’t a problem, resisting Sin is another matter entirely, all while trying to discover who wants him dead. The story begins in England but then moves to Scotland, the home of the hero.

Book 4 in the Regency Unlaced Series, Pursued by the Viscount, is available for pre-order, and will be released May 27th.

June will see the publication of the first full-length novel in my new series Knight Security—Defying Asher (Knight Security 1). Asher is a secondary character in both my books Savage Alpha, and the novella Alexandre (Knight Security 0.5) in the Royals and Rogues anthology, both of which came out in March.

As always, the stories in my Regency Unlaced, Alpha, Knight Security series are all romances with added suspense and danger. They are also more explicit in their language and sexual content than my other books. In other words, they’re hot! 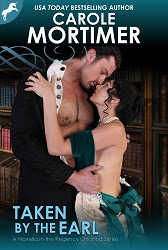 TAKEN BY THE EARL
(Regency Unladed 3)

After attending the wedding of one of her closest friends, and celebrating the betrothal of another, Mrs. Felicity Randall is looking forward to spending a peaceful summer at her house in the country. Several months when she may do and say as she wishes, without having to constantly be aware of her place in London Society as the respectable young widow of Major Stephen Randall.

But before Fliss can manage her escape to the country, she overhears a conversation in which two people discuss the murder of the new Earl of Winterbourne. Unable to see or identify either the man or the woman from her hiding place, but aware of where the murder is to take place, Fliss finds her plans for the summer changed completely, and requiring she procure an invitation to the infamous house party hosted every summer by the notorious Lady Eckles. A house party at which no respectable widow would normally dare to show her face.

Sinclair Montgomery has no time or patience for London society, as it had no tolerance for his mother so many years ago when she eloped with her Scottish Highlander, Sin’s own father. But when Sin unexpectedly inherits the title of the Earl of Winterbourne, he has no choice but to go to England to view his new estates. It was certainly not his intention, once there, to find himself the guest at a summer house party. Although the rumors of debauchery and licentious behavior to be had there were certainly enough to pique his interest.

Finding the beautiful Mrs. Felicity Randall waiting for him in his bedchamber the second night of his stay, leads Sin to believe that perhaps all is not lost after all, and he proceeds to make love to the delicate beauty. Until she informs him the only reason she came to his bedchamber, has attended this house party at all, is to warn him his life is in danger. That there is a plot afoot to murder him whilst he is there.

Sin has only been in England a matter of days, certainly not long enough to have antagonized anyone into wishing to murder him, and leading him to wonder if the poor woman can possibly be deranged.

It would be a great pity if that were to be the case, when the sexual attraction between the two of them is instantaneous and highly combustible…

This ebook is also available on Kobo, ibooks, and Smashwords.