Congratulations to "Debbie O.", the winner in Anne Marie's giveaway. Thank you to all who participated!


What is this odd urge we have to clean out our homes every spring—or is it just me? Maybe I’m crazy (there is some evidence to that effect). Or perhaps it’s just a natural inclination to want to clean house before starting a new task. I actually get the urge a few times a year, so maybe it’s a cycle. Purge the clutter to bring in the new, fresh stuff.

And how does this relate to writing, or my books? 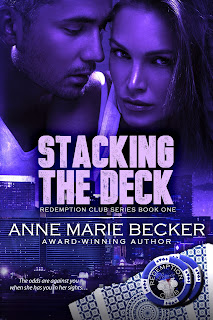 I had a bout of writer’s block early this year. I ran (wrote) myself ragged in 2015, trying to produce about twice as much as I normally do in a twelve-month timespan, and my brain just kind of…rebelled. It was cluttered. It threw a tantrum that would impress a three-year-old.

So I did what any parent would do. I put the tantrum-tosser in time out.

And I did physical, less mentally tasking things like cleaning the house and sorting through closets. Yes, I’ll admit I even cleared out and painted my pantry.

But no, it’s not just me. My dad has decided it’s time to clean off his numerous, piles-of-paper-laden surfaces. And he’s elected me to help him. (Maybe I’m a little too good at spring cleaning?) This will probably be a yearlong process. But I’m proud of him. Why? Because at the bottom of endless stacks of paper, I found all of the documentation from my mother’s battle with pancreatic cancer. That was four years ago. It’s taken him this long to move on, and that’s okay. Really. Everyone takes time to grieve. Everyone needs time to decide when (if) it’s time to move on. It’s a difficult step. And sometimes the clutter is okay.

So maybe this purge-and-restore cycle isn’t a season, but a rebirth. Having a clean desk, or mind, is like having a clean slate. A place to begin again.

I’ve spent the last several weeks getting back on track with my new series (Redemption Club—it’s kind of a dark twist on the “pay it forward” concept—for more, see below). I’m slowly getting there. In the meantime, as I spend part of my time writing, I’ve spent more of 2016 noticing life around me. Helping sort out Dad’s things on weekends (I wasn’t kidding when I said it would take a year) and sorting through my own clutter is helping me appreciate where I’ve come from, and appreciate the present and future.

This spring, I’m celebrating rebirth, and the clutter that got me here.

Please leave a comment below and let me know how your spring’s going in order to be entered for the giveaway. This season, are you surrounded by clutter or are you revamping your life?

GIVEAWAY!
I’m giving away a digital copy of STACKING THE DECK, the first book in my new Redemption Club series …

One woman’s rooftop sun deck was another woman’s sniper roost. Skye Hamilton’s index finger hovered near her rifle’s trigger as she perched on the flat roof. Slightly higher in elevation to the neighboring estate, her location allowed a convenient overlook to the party going on fifty yards away.

Through the scope, cross hairs were tattooed across her target’s chest, which was covered in a cobalt blue shirt and dark-gray suit jacket. Around him, the Malibu home’s tiled poolside patio was like the red carpet on awards night, populated with Hollywood’s rich and powerful. The trees glowed with fairy lights, and the tall cocktail tables set up for this event twinkled with tea lights in crystal-cut holders that winked in the darkness like stars. The stars that shined the brightest were actors and actresses, directors and producers—many of whom Skye recognized, though she didn’t get to the movies much.

A hair had escaped the tight bun under her black skullcap and now tickled her cheek in the cool April breeze, but she resisted the urge to swipe it away. Making a quick mental note to buy more bobby pins, she forced the distraction from her mind and focused on her other senses. Her vocal cords tightened, her pulse kicking up past the normal adrenaline-induced high.

She shifted the cross hairs higher. Robert Stone had thrown his head back in laughter, exposing the tan column of his throat, at something said by one of the party guests surrounding him. Laugh lines bracketed his mouth and eyes, evidence of the fifty-seven years that had shaped his body, carving rivulets across his forehead and painting a few gray hairs among the ebony at the temples. With manicured fingers and soft hands, he tipped his champagne flute to his lips. As her research had indicated, he was the epitome of a wealthy and powerful individual, pampered and confident in his place in the world. 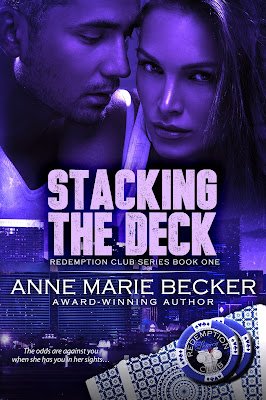 In a city built for sin, the Redemption Club is a secret society that exists to fulfill a person’s darkest desires—including murder games—for a price.
Raised off the grid by an anti-government group, Skye Hamilton puts her resourcefulness and survival training to good use taking the dangerous tasks nobody else wants. When a job searching for a runaway teen brings Redemption Club members gunning for her, putting those she cares about in danger, she’ll risk everything to fight the enemy. Including her heart.
Jared Bennigan, Las Vegas bodyguard to the elite, accepted his latest job hoping it would lead to his missing sister. All evidence points to his client as the last person to have seen her, but he’s not the only one looking for a woman who disappeared. Skye’s enticing blue eyes contradict her tough, distrusting exterior, revealing an intriguing combination of vulnerability and intelligence. But those eyes are watching his client—through her rifle’s scope.
To find both missing women, Jared will need to convince Skye—who plays a wicked game of hard-to-get—to be his partner. And with the Redemption Club intent on making Skye the prey in a human hunting expedition, her skills, and her trust in Jared, will be put to the test. It’s the ultimate game of survival of the fittest. But who will win?

ABOUT ANNE MARIE:
Anne Marie has always been fascinated by people—inside and out—which led to degrees in Biology, Chemistry, Psychology, and Counseling.  Her passion for understanding the human race is now satisfied by her roles as mother, wife, daughter, sister, and award-winning author of romantic suspense.
She writes to reclaim her sanity.


Find ways to connect with Anne Marie at www.AnneMarieBecker.com. There, sign up for her newsletter to receive the latest information regarding books, appearances, and giveaways.

Giveaway ends 11:59pm EST April 5th. Please supply your email in the post. You may use spaces or full text for security. (ex. jsmith at gmail dot com) If you do not wish to supply your email, or have trouble posting, please email maureen@justromanticsuspense.com with a subject title of JRS GIVEAWAY to be entered in the current giveaway.