With: A. B. Michaels

Romantic suspense novels are different from, say, straightforward contemporary romance in that while the hero and heroine are getting to know each other, working through their differences, and falling in love, they’re also involved in some kind of escapade that eventually puts one or both of them in danger.  So there are really two stories going on, each of which must follow a structure of increasing complication and rising stakes to keep the reader turning the page.

Adding subplots to romantic suspense gets tricky, because you’re asking the reader to take a break from the two main stories to follow yet another series of actions.  The subplot, by the way, has to follow the same rules as the main plot, in that there must be obstacles, rising tension, a climax and a resolution.

Okay, now make that a romantic subplot and it’s trickier yet, because those of us who love romance often become invested in the characters we’re reading about, and it’s downright annoying when the author breaks away from whatever’s transpiring between the hero and heroine, and goes to another couple. Then, just where you’re starting to root for the new pair, it’s back to the main actors on the stage.

So how does a writer deal effectively with all that?  First, you have to make sure the subplot is doing what it’s supposed to do, i.e. adding complexity and depth to the main plot.  Author and writing consultant Barb Miller says that if your novel is over 50,000 words, you really need at least one subplot to add dimension to your story, to “make the world of all the characters seem more real.”  Miller most often combines mystery and romance in her work, but will often add other subplots to add more conflict, tension and suspense to her overall story.

I would add this rule: if you’re going to include additional subplots in a romantic suspense novel, they must have relevance to your main story.  They’ve got to be connected, even if the reader doesn’t pick up on the connection right away. If, for example, you were writing a novel about a child kidnapping, it probably wouldn’t be relevant to have a sub plot which dealt with a woman coming to terms with growing older … unless she were somehow connected to the kidnapping.

In my romantic suspense novel, The Lair, the hero (Gabe) and the heroine (Dani) find themselves in Verona, investigating the possible murder of Dani’s father, the heir to a luxury Italian hotel company.  As they dig deeper into the case, we meet Dani’s cousin Dante, who works for the hotel company, and a young woman named Agnese (a childhood friend of Dani’s), for whom he carries a torch. The obstacles that keep Gabe and Dani apart are quite similar to those that keep Dante and Agnese from finding true love.  But it’s not until the end of the story that the reader discovers what those similarities are.

I knew I had to put the subplot into the story to better explain the intricacies of the main plot.  And frankly, I put the romance into the subplot because I couldn’t bear to leave those characters without at least the possibility of a “happily ever after”!  To ensure they didn’t overpower my main characters, however, I took care not to give them long scenes. I gave them just enough time on stage to help move the main mystery forward before getting back to the true hero and heroine, Gabe and Dani.

Did I get the balance right?  I think so.  The Lair has gotten great reviews and won several awards.  In the end, you the reader are the best judge! 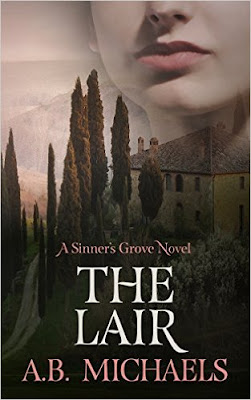 After her playboy father dies in a racing boat mishap, innkeeper Daniela Dunn must travel from Northern California back to Verona, Italy and her childhood home, an estate called the Panther’s Lair. To say she’s reluctant to go is an understatement. In fact, she’s petrified. The mansion she grew up in holds terrifying memories and deeply buried secrets. It’s a place where appearances are deceiving and the price of honesty could be death.

Complicating matters is the fact that her flirtatious friend, Detective Gabe de la Torre, is tagging along—without being asked. “I don’t need a babysitter,” she complains, and is even more upset when she learns Gabe has his own secret reason for following her to Italy. As Dani is drawn into her family’s intrigues, Gabe proves he’s much more than a friend, however. He’s a sworn protector who may lose his own life in the process of saving hers.

Gabe de la Torre needs to settle old family debts before starting fresh with the woman he feels could be The One. But when a mystery woman reveals that Dani’s father may have been murdered, the stakes rise dramatically and Gabe realizes they’re now players in a treacherous game. Keeping Dani safe becomes his top priority, even as Dani strives to figure out whom she can trust: her relatives, Gabe, or even herself.

The Lair, a stand-alone novel, follows on the heels of "Sinner’s Grove," the foundational novel for A.B. Michaels’ far-reaching romantic suspense series of the same name. “Sinner’s Grove” centers around the family, friends and associates of a world-famous artists’ retreat on the coast of northern California. "The Art of Love," an award-winning historical romance, recounts the founding of the retreat by Klondike King August Wolff and artist Amelia Starling at the turn of the twentieth century. Both "Sinner’s Grove" and "The Art of Love" are available on Amazon.

Author Bio:
I’m a native of California and have masters’ degrees in history (UCLA) and broadcasting (San Francisco State University). After working for many years as a promotional writer and editor, I figured it was time to focus on writing the kind of fiction I like to read. Honestly, life is so darn messy and unpredictable, I just want to make sure some stories end up the way they ought to.  But that doesn’t mean I won’t put my characters through the wringer. My series, “Sinner’s Grove,” pits men and women against forces ranging from merely corrupt to downright evil. But I’d say the greatest challenge for my heroes and heroines is overcoming their own flaws as they search for true meaning, and especially love, in their lives.

About eight years ago our family moved to Boise, Idaho and I adore it here.  Unlike California, it’s a four-season state, which means we get plenty of heat in the summer and just enough snow in the winter.  I’m a terrible golfer, but I love getting out on the course and whacking the ball around.  I’m a better bocce player, and we play in a summer league.  We fit our activities around traveling, which we also love to do. The only thing I don’t like about being away is leaving our two dogs, a rat terrier named Ziggy , and a (not exactly) miniature dachshund named Teddy.  They are my “posse” and follow me around the house, plopping down and sleeping wherever I happen to be (right now that’s the couch in my office).  Life is good for me, as I truly hope it is with you.
Posted by Maureen A. Miller at 12:30:00 AM

Email ThisBlogThis!Share to TwitterShare to FacebookShare to Pinterest
Labels: A. B. Michaels